Share All sharing options for: Beaver Football: Top 25 Countdown - 12 and 11

Sean Mannion started last season as the quarterback, then was replaced by Cody Vaz after he got hurt while playing against Washington State. He took over the starting role in his freshman year and led the Beavers through that tragedy of a season. He is now locked in the most of the important battle of the season with Vaz for the starting quarterback job this season. Mannion started off the season on fire, with six touchdowns in the first three games, with an especially great performance against Arizona. Then he tore his meniscus at some point against the Cougars and he never really made a recovery, especially after he came back too early and led the Beavs to their first loss against Washington. 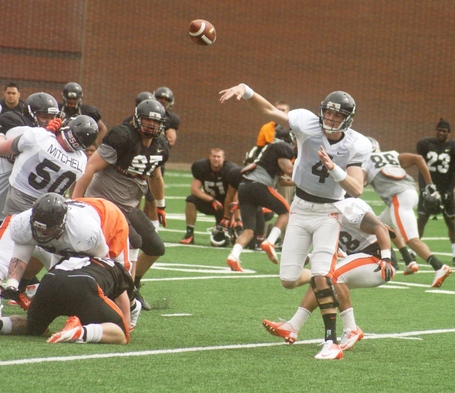 Mannion does have strange mechanics for his size, where he drops the ball down before he throws, and it helps him generate extra power. But it seems to make him a little inaccurate. He has a tendency to throw behind receivers, and the throws do have power, but they are also generally lack rotation. He is not especially mobile, but does have a decent pocket presence.

When Mannion was right last year he was great; after the injury his was never in sync. He was let back onto the field too early by Riley and the team suffered. In the end though, Mannion has more upside and if his recently added bulk can help his mechanics, then he will win the battle for the starting quarterback, although he should already be the front-runner.

Connor Hamlett is a 6' 7" mountain of a tight end/H-back and got a considerable amount of playing time last year. He led all tight ends with his 32 receptions and was actually fourth on the team behind Storm Woods, Brandin Cooks, and Markus Wheaton. Hamlett should have a much bigger role on the offense with the departure of Wheaton, although he seemed more suited to the end role as opposed to H-back. The H-back will need to make plays in space and Hamlett has never seemed like an explosive athlete, but on downfield routes he was able to use his size. 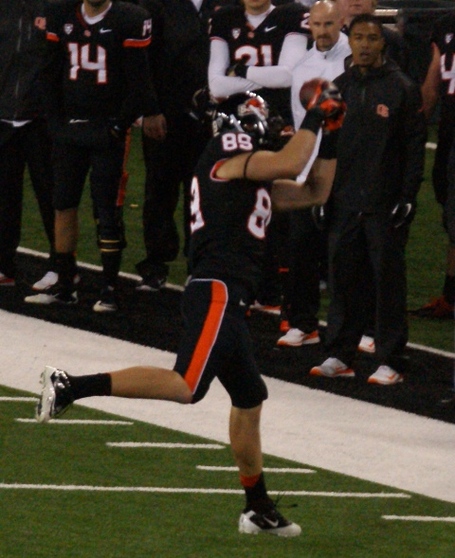 Hamlett should be on the rise, Riley has even said that he plans to make him more of a feature on offense. Hamlett has always seemed like a solid player from his early times on the practice field and he should really have a chance to make an impact as the number one tight end on the roster.