Two offensive linemen are next in the rankings.

Share All sharing options for: Beaver Football: Top 25 Countdown - 14 and 13

Grant Enger has been the starting right guard for Oregon State for the past 1.5 years, where he took over the starting role in 2011 , after subbing on the left side earlier in that season as well. He is able to move well, as proven by his history of being the back-up for either offensive tackle in the past. Enger is part of this upcoming veteran offensive line that should prove to be one of the best in the Pac-12. 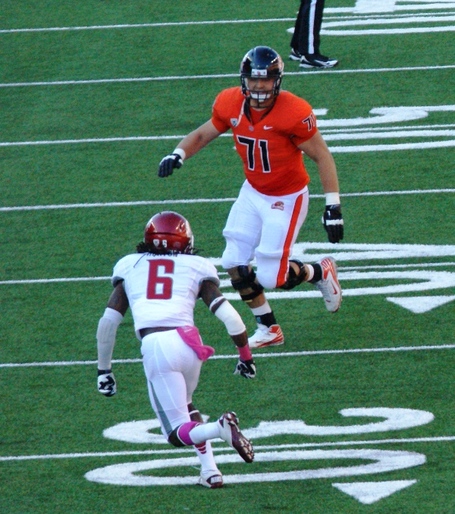 Enger has been a consistent and capable player over the last few seasons, there are not a lot of plays where he is at fault for a negative play. As a whole the offensive line seems to be a better pass-blocking team than run-blocking and Enger seems so as well, not generally overwhelming opponents but succeeding through good technique.

Enger is a captain for this upcoming season, and will be quite important. His back-up is Grant Bays, who is part of a well-regarded O-line recruiting class, but Enger should be significantly better as a senior.

He has been a solid player for Oregon State so farm and as such has landed in the middle of the list.

Josh "Juice" Andrews has been the starter at Oregon State for the last two years. He is most suited to be a guard with his play style and with his build. He has always been fairly consistent at his position and does not always stand out, but similar to Enger that is generally a positive for offensive linemen, as if they are getting noticed it is generally for a mistake.

Both Enger and Andrews are close in their abilities, but I give a slight nod to Andrews. It helps that he is in a position where he fits, where Enger might be in the wrong position. At 6' 6" and 290 lbs Enger is a little undersized for an ideal guard, where Andrews is 6' 3" and 305 lbs and still has the requisite quickness to pull and block when called. Andrews has had this slight advantage and that has helped him be right above Enger.