Share All sharing options for: Beaver Football: Top 25 Countdown - 22 and 21

Tyler Anderson is the top fullback and also doubled as a battering ram in short yardage situations. After supplanting Clayton York in camp last year Anderson did a solid job as the starting fullback, helping open up holes for all the various runningbacks that played for the Beavs. He also became a weapon when the Beavs needed to pound the ball for short yardage. Most of his 13 rushes were to convert short third downs or trying to smash through at the goal line, and they were generally successful. 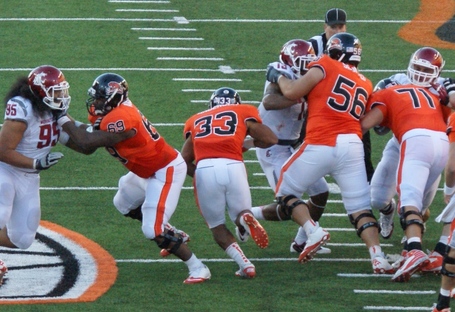 He is currently recovering from an ACL tear that occured in the California game last season, but the only replacement is sophomore Michael Balfour who got very little playing time, so Anderson's recovery will be important to the Beavers offense. There are not a lot of updates on his knee, but there are not any negative reports so he should hopefully be ready for the part of the season.

Anderson is down on this list because there is uncertainty about his knee and just because of his position. Just like Romaine he is actually quite good at his position, but the position does hold back his value a bit.

Kevin Cummings was the starting slot receiver for Oregon State last year and the majority of his targets was swallowed by the two headed receiving monster of Markus Wheaton and Brandin Cooks, which accounts for his real lack of receptions. He did seem to disappear over the season as well, his average receptions per game comes out to 1.38 and average yards per game were at 16. Not counting the Nicholls State game he only had 14 receptions, 144 yards, and no touchdowns on the season. For the starting slot receiver that is not nearly enough production. Now with Wheaton gone it will require Cummings to step up especially since no one receiver will be able to replace Wheaton's production at his specific position, although that is if Cummings holds onto his starting position.

It is disappointing to rank Cummings this low, watching him in fall camp last year I came away very impressed, but he failed to back that up over the season. He has an opportunity to play a bigger role this year and hopefully he takes full advantage of this chance.