This is the kick-off for a new series featuring the top 25 players for Beaver football. All the JUCO transfers were omitted from this list as they have not had enough opportunity to prove themselves yet. This rubric is less statistic based and is more based on the eye test, but the numbers were accounted for as well. That said discourse is encouraged.

Share All sharing options for: Beaver Football: Top 25 Countdown - 25 to 23

Starting the list at number 25 is the kicker, Trevor Romaine. He has proved himself with 36 touchbacks out of 82 kickoffs, and had a very accurate last season, with 16 out of 18 field goals, best in the Pac-12. He also had 51 out of 54 extra points, and has been named to preseason All Pac-12 teams, and yet Romaine still makes me extremely nervous. The memories of his misses in the Sac St. debacle are probably a major factor in this as well. He also had four out of bounds kick-offs for last season.

Romaine can probably never clear himself completely in my eyes, when he kicks I literally close my eyes and wait to hear cheers or boos to know if he made it. One part that concerns me about Romaine also is that I cannot recall any high pressure field goals that he had to convert last year, and as that was a problem against Sac. St. I would like to see him convert a game winning chance at some point to help restore some trust. 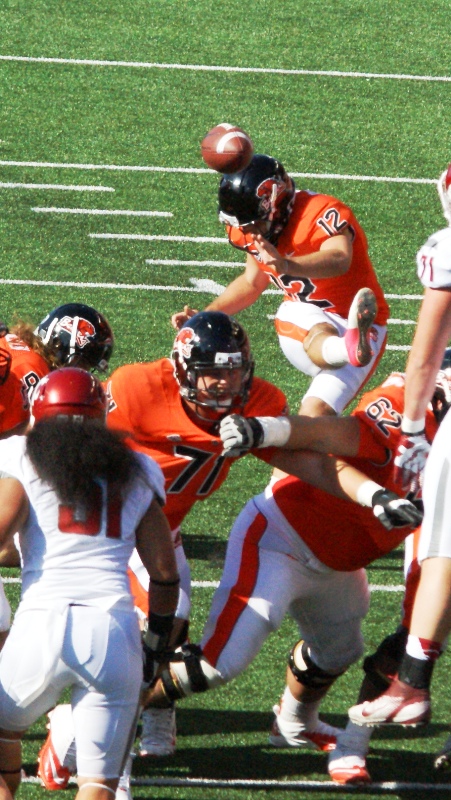 Now Romaine, above, never had much of a chance to climb this list as a kicker, but the fact that he still makes me so nervous made it impossible to move him higher than number 25 on this list.

I debated about breaking my JUCO rule and replacing Tyler Perry after going back over Perry's stats, or rather the lack of stats. He is in a leading position to start at tight end, but played only in four games last year, and only two games in the season before that. In all of those games, Perry did not have a reception. It reaches a point where its hard to just classify him as a blocker although even Connor Hamlett only had 32 receptions over the season, so there was not a lot of targets to go around anyways. The complete lack of production and playing time does not look great for Perry, but he now has his chance with Colby Prince moving on. Nothing stands out about Perry, but he should have a shot to get a bigger role in the offense now.

The sophomore out of Granite Bay is listed as 6' 5" and 320 pounds which is tied for heaviest on the team with Siale Hautau. This mammoth of a man is penciled in as the starter at right tackle and has been impressive in spring camp from multiple reports. Apparently his size has not had a negative impact on his quickness in speed, even beating everyone else to a fumble on one occasion.

There is not much tape on Andrews besides just camps, but I feel that by the end of the season he will climb this list. From all early reports Andrews seems to fit the mold of great right tackles, being a sort of mauler and frankly he should end up being an excellent replacement for Colin Kelly in the long run, maybe even this season.