After being moved to a midweek role despite being a weekend starter early on in the season, junior Dan Child hurled a pair of disappointing, 3.1 inning performances before going into Wednesday's game in Portland. That shaky pitcher was nowhere to be found on a partly sunny afternoon on the Bluff, with Child throwing eight innings and only giving up one run on four hits, on just 72 pitches. Cole Brocker efficiently closed the game in a non-save situation in the ninth.

The fifth ranked Beavers jumped out to a 1-0 advantage in the third when Danny Hayes led off the inning with a single, was sacrificed to second on a bunt, and two batters later came home on a Tyler Smith rope to left field. The Pilots showed the same resiliency we saw in the teams' lone meeting earlier in the year, coming back in the bottom half of the frame to tie the game on a Nick Armenta RBI single.

Oregon State got what proved to be the winning run on a beautifully executed suicide squeeze play in the fifth, with Pat Casey pulling the Max Gordon lever after a double and single to start the inning. Gordon laid down a perfect bunt and brought home Danny Hayes to make it 2-1.

Hayes had one of his best games of the season, going 4-for-4 and smashing two doubles, including one in the 6th. that was barely short of going out of the park that scored both Kavin Keyes and Jake Rodriguez. Hayes went on to score the last run of the game on a single by Andy Peterson.

Ryan Barnes also had a 2 hit day, including a double, to extend his hitting streak to 11 games.

The combination of Child and Hayes sent the overflow crowd of 1,007, 90% of which were dressed in orange and black, home happy, despite a light rain in the ninth inning to ruin a perfect weather day. It was the first capacity crowd at Joe Etzel since the Beavers and Pilots met on April 24, 2007, and the figure actually should have been more as multiple fans found ways to sneak in, whether being through fake hand stamps or side gates left unlocked. Law-abiding fans were left to view the game by constructing objects to stand on from beyond the outfield fence. The game lasted a tidy 2 hours and 14 minutes, which has become a trend for Oregon State in recent games.

Portland started freshman Zach Torson, who came into the game with an awful 0-4 record, and left with another notch in the loss column.

Dan Child improved to 4-1 on the 2013 campaign, with three of the victories coming away from Goss Stadium. He once again provided a vast skill set, throwing three different pitches solidly and fielding his position well. Child has increased his power and velocity by throwing on a more downhill plane, and his natural ability to hide the ball until the last possible second had Pilot hitters confused and spraying balls out of play. As these midweek games become more numerous and more important down the stretch, his performance will be magnified as OSU chases a National Seed. 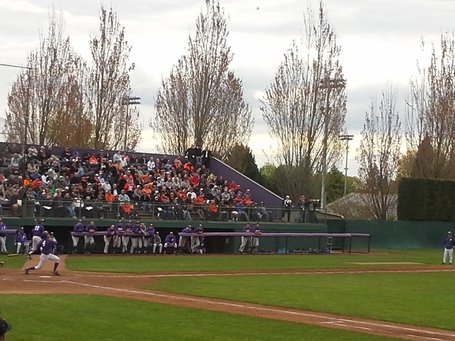