Halfway through the third week of spring football practice, Oregon St. is showing expected signs of evolution. During the first two weeks, it was easy to find examples of dramatic change, even day to day, as players and scheme both got up to speed.

Now, the emphasis is more on details, be it hand positioning for linemen, or repetition of route running to get precision. There's also the look of familiarity that makes one wish college teams could or would do as pro teams sometimes do in camp, and incorporate a scrimmage against another team, just to show players something different.

One thing the repetitions are doing is underscoring where Oregon St. can expect to succeed based on matchups, and where scheme will be more important.

Case in point, the secondary is as deep in terms of athleticism as it probably ever has been, but its also devoid of height. Big receivers are going to be impossible to consistently handle one on one, as Obum Gwacham's elevated grab, as well as a lot of productive work by Oregon St.'s big tight ends (recall the trouble the Beavers had with Stanford's run away rhinoceroses they call tight ends). Fortunately, defensive backs coach Rod Perry and linebackers coach Trent Bray are probably the most creative members of the staff, as it will take well-thought out schemes to deal with big receivers, while matching up with smaller ones will generally work, making run support easier.

That could be critical, as the defensive front has tended to alternate between being very effective against the run, and giving up some big plays, especially where Storm Woods, below, in involved. 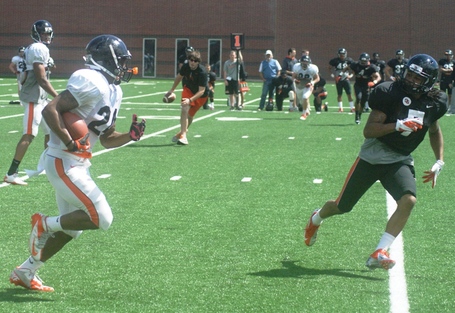 We've also seen reinforced the fact that taking a pass interference penalty and taking out Brandin Cooks is a relative choice tactically, but a better one than letting him get away for a touchdown.

Another thing the continual rotation is accomplishing is getting reps for a lot of linemen. A few injuries are cropping up, but that's reality come the fall, and a key to last year's dramatic turn-around was the depth of the defensive line. Even the loss of DT Siale Hautau, who broke his hand when his thumb was caught in an offensive lineman's shoulder pads hasn't phased defensive line coach Joe Seumalo.

"We are looking at eight in rotation, like last year," Seumalo said. "When we had the most success was with a front with eight starters, and other guys fighting to get into that eight."

Updating the injury front, tight end Tyler Perry was on crutches today, after having to be carted off yesterday in pain, due to a hip injury. Head coach Mike Riley didn't think the injury will persist into the fall, but Perry's spring activity could be over due to a deep bond bruise. 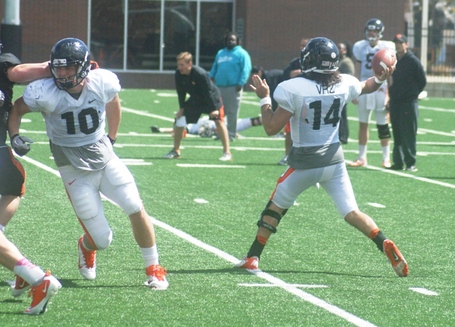 Caleb Smith, above blocking for Cody Vaz, has also progressed well this spring.

In better news, TE Connor Hamlett was back in action today, after having to leave Monday after tweaking his knee. Riley thought holding him out the reast of the day was an appropriate precautionary move at the time, and Hamlett didn't show residual signs today.

In other news, a couple of walkon offensive linemen, Garrett Southam, a redshirt freshman from Durham, CA, and Jake Hatcher, a junior from Astoria, who transferred from Western Oregon, have left the team.

Oregon St. will take Wednesday off from practice, before continuing Thursday, and will again scrimmage with both referees and a DJ providing music on Friday.