Eight consecutive made free throws by Josh Powell, Chasson Randle, Josh Huestis, and Gabriel Harris provided the final margin of victory for Stanford over Oregon St., but it was the Cardinal's 3 point shooting that shot down any chance of the Beavers escaping the Pac-12 cellar.

Stanford sank 14 of 25 3 pointers, 56%, with makes by a half dozen Cardinal, and including multiple runs of multiple consecutive 3s, obliterating a decent day by Oregon St. from behind the arc, in which the Beavers also shot 56%, but took only 9, and made just 5.

Oregon St. head coach Craig Robinson shook up the starting lineup, inserting Challe Barton in place of Jarmal Reid for matchup purposes, and the Beavers did jump out to an 8-0 lead, before a 3 pointer by Randall.

In what would be a glimpse of things to come, Rosco Allen, who had made 2 of 13 3 point attempts for the Cardinal all season, came in off the Stanford bench and promptly buried back to back 3 pointers. Randle added 2 more 3 pointers, and Stanford was back within 17-15.

Randle was already 14 points into his co-game high of 20, having shot 5 of 6 from the field, including 3 of 3 from 3 point range. Nelson's late surge had him at 10 points by the break.

Another Burton basket got the Oregon St. center to 14 points for the second consecutive game on the Bay Area trip, but Randle buried another 3 pointer, and then a pair of 3s by Stanford's John Gage overshadowed Burton's continuing efforts.

Oregon St. turned the game into a real battle, as an Ahmad Starks 3 pointer pulled the Beavers back within 48-45 just over 4 minutes into the second half. With Stanford flirting with foul trouble, a pair of offensive rebounds by Eric Moreland allowed Starks to sink the shot to tie the game at 51 apiece, and then a blocked shot by Moreland led to Starks' basket that put the Beavers ahead 53-51 with 11:50 to go.

Oregon St.'s defense was improved in the second half, as Stanford had hit only 6 of 17 shots after the break at that point.

Nelson would miss 3 consecutive free throws, but Langston Morris-Walker, making his homecoming to the Bay Area, hit a 3 pointer for a 56-56 tie with 9:25 to go, and the battle was on.

The next 4 scores, and 9 of the next 10, produced lead changes, but once again, it was Stanford's 3 point shooting that asserted itself, and took control of the game.

The last 2 of the Cardinal baskets in that run of lead changes had been 3 pointers, by Huestis and Bright, and then consecutive 3s by Powell opened a 71-66 Stanford lead with 3:23 to go. 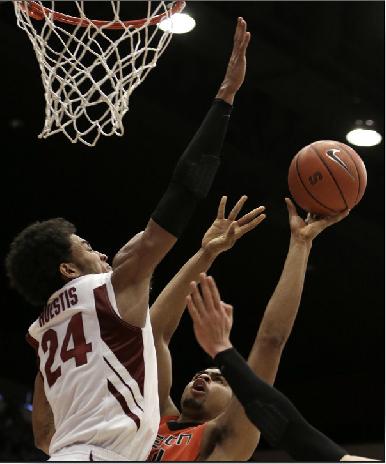 Moreland's tap-in pulled Oregon St. within 71-69 with 1:44 left to go, but a runner by Huestis, and then Huestis' block of a shot by the Beavers' Devon Coller, above, set up the stage for the 8 straight free throws, all of which went down, as Oregon St. had to foul to extend the game.

Nelson's inconsequential basket kept the margin from being double digits, and increased his total to a co-game high 20, matching Randle.

Burton was next in line, with a 17 point, 10 rebound double double, and Burton also had 5 assists.

Huestis also posted a double double, with 16 points and a game high 13 rebounds, to go with 4 assists, and 2 key blocks.

Moreland just missed a double double off the bench, with 8 points and 10 boards, to go with 3 assists and 3 blocks.

Starks finished with 15 points, and Collier was also in double digits, with 10, while Powell and Gage were in double figures for Stanford, with 14 and 12 points, respectively.

Turnovers were also a key in the competitive contest that a small crowd of 4,733 saw (with most folks already into Super Bowl party preparation). Oregon St. suffered 11 first half turnovers, but cleaned things up, giving the ball up only 3 times after the break. But Stanford turned the ball over only 4 times all day, and none in the second half.

"I know it sound disingeniouss," Robinson said, "but I was really proud of our guys, for the way they came out and battled. Stanford made some plays at the end, but we answered every time all day."

Barton's absence in the latter part of the game was due to a knee to his thigh. "He couldn't move it," Robinson said.

"We have some great, hard working guys who deserve better," Robinson felt.

What the Beavers once again did not have, however, was the ability to defend the 3 point shot, and it ultimately shot down their chance to win.

Stanford improved to 14-8, and 5-4 in the Pac-12, tied with California and Washington for 5th., after having swept the state of Oregon schools. The Cardinal, Golden Bears, who also swept the state, and Huskies, who upset Arizona St. Saturday night, are all just 2 games behind league leading Oregon and Arizona, with Arizona St. and UCLA in between.

The Beavers have a short turnaround, after the late in the weekend game today, with a visit from Utah on Wednesday night, not Thursday, at 7 PM. The Utes are 10-11, and tied with Washington St. for 10th, after upsetting Colorado 58-55 Saturday.