Share All sharing options for: Matt Boyd Pac-12 Pitcher Of The Week

Oregon St.'s senior left hander Matt Boyd has been named the Pac-12 Pitcher of the Week after his dominating performance in the Beavers' 2-0 win at San Diego St. last Friday night.

Boyd went a career long 8 1/3 innings in the shutout, and had a career high 9 strikeouts, against just 5 hits and a walk, in his second strong start of the season, which was only his 4th career start. Only 1 Aztec runner advanced as far as third base.

It was a good weekend overall on the diamonds for Oregon St., as in addition to the baseball team sweeping their series against San Diego St. to improve to 8-0, the softball team swept the Mary Nutter Collegiate Classic in that Beaver friendly town of Palm Springs (where the baseball team had swept the field the week before as well) to extend their current winning streak to 11 games, and improve to 13-3 for the season. 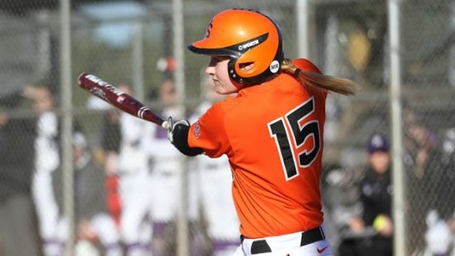 A big part of that was first baseman Natalie Hampton, above, who hit .400 (6-for-15), with 4 home runs and 7 RBIs. She has now homered in five of her last six games and six of her past eight, and as a result, was named the Pac-12 Softball Player of the Week.

It was the first time for either player to receive a conference weekly top performer award.