The Oregon State softball team started the season with a rough opening, going 3 and 3 in the Kajikawa/ASU Classic, including a 14 to 2 loss to #2 ranked Oklahoma, but since then have won their next eleven games to extend their overall record to 13 and 3.

With the struggling OSU basketball teams this year there is some good news so far on the diamond for both the men and women. Oregon State softball started out struggling in their opening play in Tempe, Arizona but since losing 5 to 3 to #21 Kentucky the Beavs have put the pedal to it winning their last eleven games for a current 13 and 3 overall record.

The Beavs have done it with some close games, such as a back and forth 11 inning win against Nevada that included a game-winning sacrifice fly by senior catcher Ally Kutz, to five inning blow out wins against Long Beach State (17 to 3) and Colorado State (11 to 0). After going 3 and 3 in the Kajikawa/ASU Classic, OSU swept through both the Easton Desert and Mary Nutter Collegiate Classics. 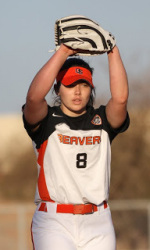 Currently the Beavs are sitting with eight "Others Receiving Votes" to be ranked and if they continue their excellent play they should find themselves in the top 25 sooner than later.

The softball team is on the road for the Easton Invitational where they will play Iowa, Northwestern, Cal Poly, Indiana, and CSU Bakersfield; and then the Fresno State Invitational to play Saint Mary's, Fresno State, Iowa State, and San Diego State. The team finally comes home to host their first games in Corvallis on March 14th with a two game series against New Mexico. OSU then goes back on the road again against UC Davis and CSU Bakersfield, and finally will get conference play started on March 28th at #3 Arizona State to then host #20 Stanford the next week in Corvallis.