Beaver Nation has seen glimpses of what may be the new logo (certainly its a good enough candidate to have had t-shirts made up) coming out of the re-imaging and uniform redesign effort done in conjunction with Nike, and reaction has been mixed, to put it mildly. Neither Oregon St. nor Nike have acknowledged the new samples are accurate, but notably, neither has denied that this is the Beaver of the Future either.

There's been little time for a redesign if the "leak" was strategic, in order to gauge the public's response, but possibilities include intentionally leaking something other than what's really coming, and leaking something that's indeed very similar, yet still different, than the ultimate image. 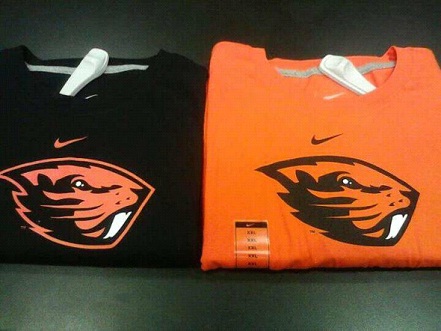 On Monday, March 4th., at 6:30 PM, the official unveiling of what the new image will really be will occur. The debut of the new logo and uniforms will occur at the CH2M HILL Alumni Center, which is across the street from Reser Stadium.

Several current student athletes will model new uniforms, and Benny Beaver will make his first appearance in the new attire. The new uniforms, which will extend to all sports, will debut in a competitive environment starting in August, beginning with soccer, football, and volleyball. Oregon St.'s football home opener, which will be when most see the new image in action in person, will be August 31, when the Beavers host Eastern Washington.

Osubeavers.com will stream the event (and it probably won't even be a "for fee" event!) live.