Hawaii Beaver won't be this colorful on game day.

Share All sharing options for: Sheraton Hawaii Bowl A Black And White Affair

"Hawaii Beaver" has made his appearance, but Oregon St. won't be this bright Tuesday for the Sheraton Aloha Bowl.

The Beavers will break the athletic department self-imposed "no mix and matching of the new uniforms rule" for the first time, wearing white pants under their black helmets and jerseys against the Boise St. Broncos.

This is what they will be playing for: 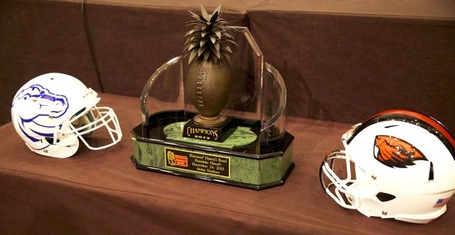 (Didn't realize they grew footballs in Hawaii previously, but it would look good on display in the Valley Football Center.)

Rumor has it that in 2014, we will start to see some games with more of the 27 combinations of uniforms possible, only 3 or which have previously been used.

Speaking of black and white, the officials in stripes assigned to the Sheraton Hawaii Bowl will be a crew from the ACC.