Huskies Take A Chainsaw To Beavers

Share All sharing options for: Huskies Take A Chainsaw To Beavers

I feel like writing about the Oregon St. band, which soldiered on through last night's debacle, and especially the seniors, who deserved better.

And it can't be lost in the shuffle that Brandin Cooks, in what increasingly looks like might have been his last game at Reser, set a new Oregon St. record for yards in a season, and moved into second place all time in the conference.

It would also be unfair, as well as irresponsible journalism, to not acknowledge a great game by a well-prepared Washington team. Kudos to the Huskies.

But when you have shivered through an unprecedented event like last night, its hard to get past what was documentably the single worst job of preparation in the long history of the program.

During the "Dark Ages" of 28 consecutive losing seasons, there were a lot of inept teams, which had very little talent and less depth. Some had incompetent coaching, and all had far less to work with, in terms of equipment and facilities.

Look way back in the Oregon St. media guide and you will also see many episodes of revolving door coaching assignments that amounted to little more than assigning someone to oversee a rec-sports program.

And in both eras, those teams played some absolute powerhoues. National Champions and teams that went undefeated, or to Rose Bowls.

And yet all of them did better than what happened last night.

No team HAS EVER run for as many yards as Washington did last night against Oregon St.

No team HAS EVER scored as many points as the Huskies did last night against the Beavers.

No team HAS EVER had 3 players all run for over 100 yards against an Oregon St. defense, be it a "Banker defense" or any other system, never mind 3 that all topped 140 yards.

Washington is a good team, but the Huskies are NOT on the same plane as some of the powerhouses the Beavers have faced. They had lost 4 of their last 6 games before heading into Reser. And they had a quarterback making his first ever collegiate start, with fully one half of experience in a contested game situation (vs. garbage time mop-up).

It's perplexing how, in the 11th game of the season, and the 13th week, Oregon St. continues to have total communication/assignment breakdowns between the safeties that result in no over the top help for corners in press coverage, a scheme that REQUIRES safety over the top help. 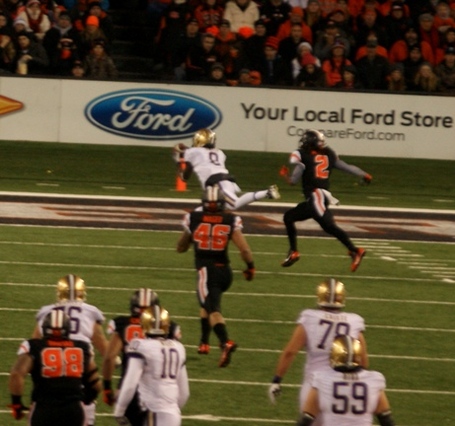 But since it happens several times each and every week, it wasn't that much of a surprise, and Kevin Smith gladly took advantage of it.

What was a surprise was the base defensive scheme Oregon St. defensive coordinator Mark Banker employed.

The Beavers went with an extremely wide-split defensive front, essentially selling out at all costs to contain the mobile Cyler Miles. And given the trouble Oregon St. under Banker consistently has with any form of mobile quarterback, on the surface, one can see where that idea came from.

But Washington was already starting an unproven backup in Miles, trying to preserve the health of Keith Price, who was clearly more than able to throw, as exhibited in pre-game warmups. Washington coach Steve Sarkisian's decision to not go with his best quarterback option in a must win road game was a clear indication that he was concerned about Price's durability.

With only another red-shirt freshman in Jeff Lindquist behind Miles, it was obvious that none of the Washington quarterbacks were going to run all over Reser as the Huskies first offensive option. Normally something Sarkisian tries to leverage, it was something he knew he couldn't afford to do last night, and had to use sparingly and selectively.

Compounding the problem was Bishop Sankey, one of the best running backs in the country. Sankey is a lane-cut type of runner of the top tier. He thrives on lanes, and is usually only controlled by defenses that clog up the middle AND bring a lot of active linebacker action. See the UCLA and Arizona St. games, Sankey's worst outings of the season.

The first adjustment attempt was to go to a 3 man front, with Scott Crichton at nose guard. And the defensive ends outside the Washington tackles. While still siting in nickel coverage against a quarterback that threw 24 passes all night.

Even once the game was out of hand, and Oregon St. reverted to base 4-3, the linebackers, by now the backups, tended to set behind the line, not filling gaps. And with the outside linebackers INSIDE the DEs, which made it easier for Dwayne Washington to have a career night.

I had written in multiple pre-game conversations about D.J. Alexander especially being one of the keys to watch in the game, and that was accurate; though in disastrous fashion for Oregon St.

Despite co-leading the Beavers in tackles, with 10, Alexander alternated between disappearing on key plays and appearing confused about his role all night.

What the thought process in any of these moves were is completely unclear, and Coach Mike Riley shed no light on the decision process afterward.

The offense also performed extremely poorly, and the decision process is equally as inexplicable there as well.

Oregon St. continues to not be able to run the ball, and unless there is a major break out against Oregon, or Chris Brown gets a LOT of garbage time carries, this will be the first season since 1990, at the end of the "Air-Kraigthorpe" era, that there won't be at least 1 game somewhere in the regular season where a Beaver running back has posted a 100 yard game.

Keep in mind, there are 3 soon to be departing seniors that start on this offensive line, plus a 4-star recruit with now 2 seasons under his belt, and since 1/3 of the way through the season, a very highly touted and recruited freshman.

That's not normally the resume of a group that's this inept at run blocking.

Sean Mannion was sacked only 3 times last night, but was regularly hurried, and flushed several times. This by a Washington defensive line that is the weakest of the 3 position groups. And they did it without more than a handful of blitzes.

So how did the Huskies do this? By gap rushing, rather than engaging the Beavers' zone blocks. This tactic has repeatedly worked against Oregon St. offensive lines not schooled AT ALL in lateral movement (recall a certain Washington STATE upset of a generally better Oregon St. team not so many Novembers ago).

An almost obstinate resistance to cross-over technique also has resulted in a offensive line that rarely pulls and almost never trap blocks, making it extremely difficult to open lanes if lock-up blocks can't be initiated.

Certainly not the tight ends.

After a career night against Arizona St. by Connor Hamlett, where the main criticism of the Oregon St. play calling was why Hamlett wasn't featured more, and the absence of Kevin Cummings, it seemed like the key to dealing with the Washington secondary was to over-muscle them. Using Hamlett and others in the Beavers' stable of tight ends.

Neither Hamlett nor Caleb Smith had a catch last night. Kellen Clute didn't either. Tyler Perry tallied only 1. Riley as the play caller, needed to ensure his tight ends were a factor in the game, and explain why they weren't. Neither happened.

And since Cummings' injury against Stanford, Oregon St. has repeatedly tried to force an obviously not ready Malik Gilmore into action. With increasingly worse results. Gilmore also had no catches last night.

Micah Hatfield finally did, for a 33 yard touchdown.

On a pass from Cody Vaz, with less than 2 1/2 minutes left (most of you who didn't stick it out, either in the stadium or on tv probably missed that), and Oregon St. down 7 touchdowns.

Obum Gwacham had his first catch of the season too. Possibly the least viewed catch in Oregon St. history.

There may be something positive to come from last night's embarrassment of lack of proper preparation. As some Washington fans who were apologizing for the embarrassment also noted, it took the worst defensive performance in Husky history in the Alamo Bowl to finally force a change of philosophy (and defensive staffing). Perhaps either Riley will decide its time to save his legacy, and maybe his job, by finally modernizing schemes on both sides of the line of scrimmage. Addressing special teams could be a bonus move to consider too.

Or perhaps Bob DeCarolis will finally be embarrassed enough to.