OSU vs. ASU: Beavers offense is stymied again for 30 to 17 loss

Even with a solid defensive performance, Oregon State's offense can never get fully off the ground and sputters to a 30 to 17 loss to the 19th ranked Arizona State Sun Devils.

Share All sharing options for: OSU vs. ASU: Beavers offense is stymied again for 30 to 17 loss

It was not a pretty first half for the OSU offense or the special teams, both of which basically let the Sun Devils control the game and as such left the defense in difficult recovery spots.   The defense had their own lapses, but also forced two Taylor Kelly interceptions, the first, below, by Rashaad Reynolds, and had some key stops when it looked like ASU would completely blow out the Beavs. 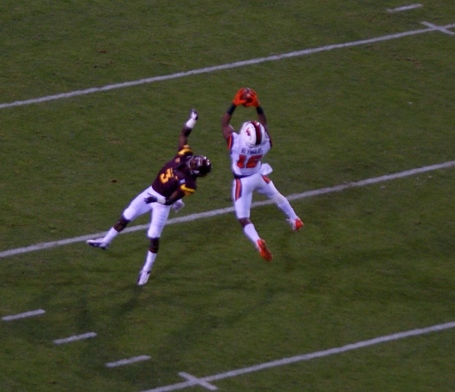 But the offense could not do anything with the ball after the ASU turnovers.   Additionally Brandin Cooks fumbled the ball on a punt fair catch to allow ASU a short field leading to an easy Marion Grice one yard touchdown run.

There was a sense in the first half that Oregon State at times looked ready to try and control more of the line of scrimmage with a little more of the rushing game. 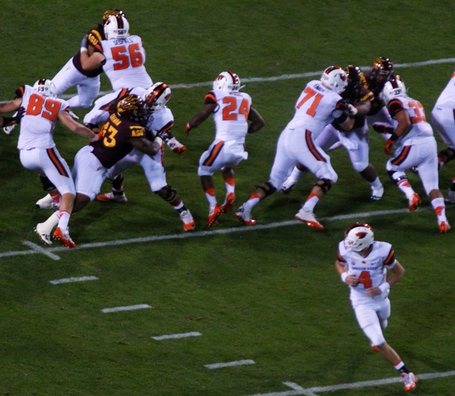 Storm Woods, above, went for 21 yards on 7 carries to mix things up a little, but the passing offense could not get going at all.   Sean Mannion went 12/21 for 114 yards and threw one interception.  A bit indicative of the first half issues, and strangeness was the third possession of the game.   Oregon State had wonderful field position at the 50 yard line after Jabral Johnson intercepted Kelly.   But on a 4th and 1 Mannion threw away the ball on an all or nothing pass down field that sailed over tight end Caleb Smith's head to be picked off by Robert Nelson, below, in what amounted to an unintended punt.  ASU was up only 7 to 0 at the time, but was able to seize upon that momentum swing and drive the field to go up 13 to 0. 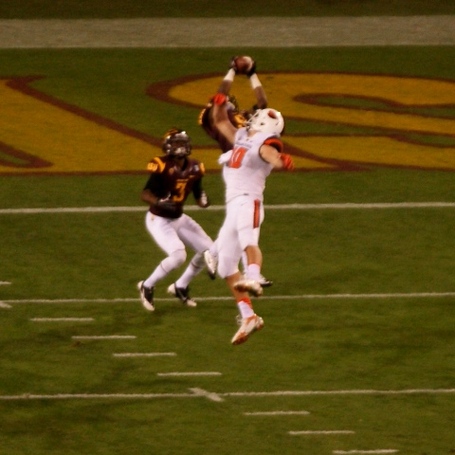 Cooks was mostly held in check in the first half, but in the second quarter Mannion finally connected with Cooks on a 42 yard play.  But the play was for not as Mannion turned the ball over on his second very poorly overthrown ball of the game 2 plays later.

The OSU defense stepped it up though, after what could have been a completely deflating OSU turnover.  The defense forced a ASU three and out to give the Beavs offense good field position at the 50 yard line with just over six minutes left in the half.  This drive set itself up as the most important in the first half, for to not come away with any points here felt like it could just hand the Sun Devils the game.  But some strange play calling with two run attempts put the Beavs in a long 4th and 5 yards situation, which led to an important ASU off-sides penalty giving the Beavs a rare conversion.   Oregon State though returned the favor and took away a possible first down into the redzone on a false start penalty.   The Beavs then finally turned a key conversion on their own with a nifty Cooks run after the catch on a 4th and 11.   Luckily OSU kept enough time on the clock to kick a 22 yard field goal.

The Beavs though did not light things up in the first half with only 127 total yards and three points. On the flip side the Sun Devils were able to control the game clock and field position early in the game to build a 20 to 0 lead.   Kelly went 14/25 for 122 yards in the first half.  Grice had 71 yards on 11 carries, and ASU had 216 total yards.

The Beavs at times would just start to seem to get things going on offense and did make some strides at the end of the half to actually end up with more time of possession and get some more yards on offense.   But for the first half it was too little too late allowing the #19 ranked Sun Devils to build up a comfortable 20 to 3 halftime lead.

The second half looked promising as the OSU defense held the ASU offense to 119 yards and only three points.  It took awhile but what looked to be an adjustment on offense to get the OSU tight ends more involved started to pay off as Connor Hamlett, below, sparked the team with a tough catch in traffic for 26 yards to convert a 3rd and 5. 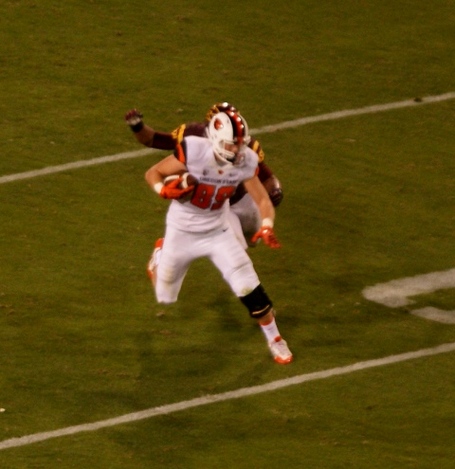 The Beavs were able to start getting Cooks and Richard Mullaney more involved in the offense, and drove the ball down for their first touchdown of the game.

Oregon State's defense kept up their solid play with a key sack by Scott Crichton to end the 3rd quarter.   This set up another solid looking Oregon State drive, which even included some solid run plays, but once too many times to the rushing well and a key personal foul penalty backed up the Beavs for a long field goal attempt that was blocked.  This then led to what looked like a game sealing drive by the Sun Devils, but the Oregon State defense held on three downs after the Sun Devils were able to get a 1st and goal at the 6 yard line, which ended up only leading to a ASU field goal.   13 points seemed like enough for ASU, but OSU seemed to have enough life in them to make things interesting.  Alas, like the rest of the game it then went the other way for interesting as Mannion threw a pick-six that was intended for Mullaney, but was badly underthrown, allowing Robert Nelson to put ASU up 30 to 10, below. 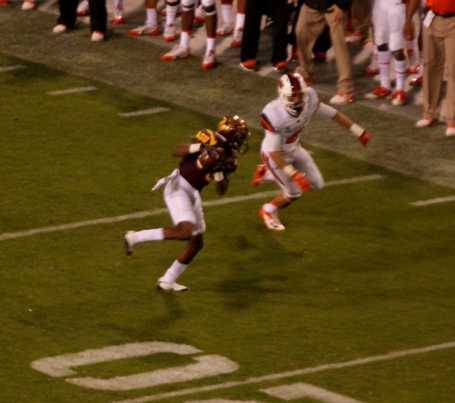 Oregon State took the ball down the field for a fast and impressive answer drive ending in a Mannion to Hamlett 29 yard touchdown.   But it was again too little too late for the Beavs, who cannot recover the on-sides kick and thus dropping their third in a row game.

OSU was able to finish with 390 total yards (actually out gaining ASU, who had 339 total yards), converted 2 for 3 4th downs.   Sean Mannion finished the game 31/46 for 320 yards and two TDs but also included four INTs.   Brandin Cooks caught 9 receptions for 99 yards, and Connor Hamlett led the team with 119 yards on 9 receptions. Cooks now has 100 catches this season, and became the all time leader in a single season, moving past Mike Haas and Markus Wheaton.

In many ways it was a bit of a strange game in that both teams did not look sharp.  But ASU played the better all-around game, made the plays when they needed to be made, and their defense flustered Mannion enough to keep his current streak of uneven play going.   In a twist of expectations though the OSU defense played a fairly decent game.   Indeed the defense was put in some bad spots by offensive and special teams turnovers in the first half, and in the second half only allowed one ASU field goal.  The game for the Beavs seemed ready for the taking in the second half, but the offensive play could not overcome miscues.

The loss drops the Beavs to 6 and 4 overall and 4 and 3 in Pac-12 play.   Oregon State plays next week for their final home game of the season against Washington.  Arizona State continues its impressive Pac-12 South run and goes to 6 and 1 in the conference and 8 and 2 overall, and play next for what looks to be the Pac-12 South championship against UCLA.