The Beavers made a late charge, but the Cardinal held off the Beavs en route to a 20-12 win.

Share All sharing options for: Beavers Can't Cut Down Cardinals

The 1st quarter was a scoreless affair, with both defenses taking over the game. For Oregon State, Scott Chrichton was an absolute animal, dominating the Cardinal offensive line. He scored a sack and recovered a fumble by Dallas Lloyd, below. 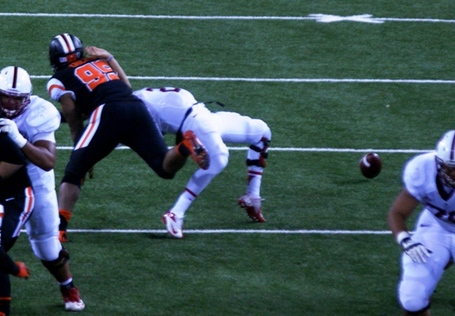 In the 2nd quarter the Beaver defense continued to shut down the Cardinal offense for the most part, and the Beaver offense managed to twice get into field goal range, but both times opted not to kick the field goal. This would come back to bite the Beavers later, and actually would bite them in the quarter. After trading drives back and forth, the Beavs had the ball at the Stanford 34 with about a minute left in the half. It was 4th and 1 and with the Cardinal defense continuing to beat up the OSU offensive line up front, Mike Riley opted for a qb sneak. 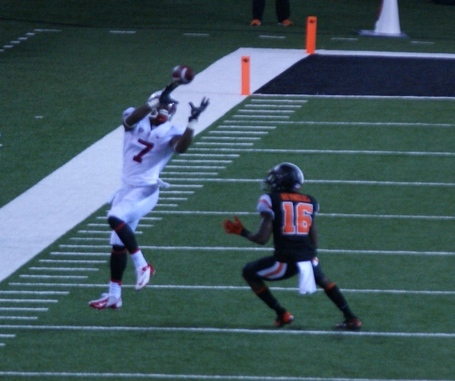 This seemed like the wrong decision at the time, and it came up short. Kevin Hogan converted a 3rd and 7 when they got the ball back and tossed a deep pass to Ty Montgomery, above, for the first down and then scrambled to take the ball to the end zone, where Tyler Gaffney would score a touchdown. Suddenly the Cardinal were up 7-3 when the Beavs had two opportunites to score field goals. 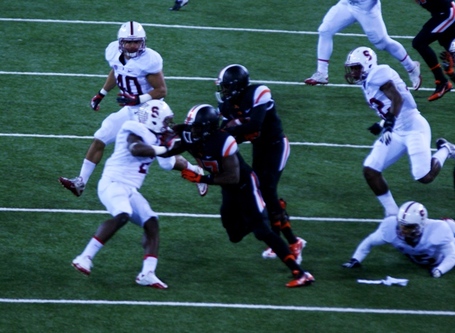 To kickoff the second half Victor Bolden fumbled when he ran into his own man, above, setting up another Gaffney touchdown run. Suddenly the Beavers were down 13-3 after a missed extra point by Stanford, and the Beavs had not played much worse than the Cardinal. The Beavs would drive for 6:23 and then had the drive stall on fourth down again. This would be a reoccurring theme for the night, as the Beavs failed 4 out of 5 fourth down conversions. After the Cardinal could not convert a third down, the Beavs got the ball back, and OSU managed to convert a touchdown drive with another Mannion to Cooks touchdown.

It set Oregon St. season and career records for touchdown passes for Mannion, and touchdown catches for Cooks, but was also the only time the Beavers previously prolific offense, which had by far its least productive night of the season, crossed the goal line.

The Cardinal would drive down the field in response to move up to 20-9, with Gaffney's career high third touchdown. The Beavs and Cardinal traded punts. The most troubling punt came for the Beavs with about 4 and a half minutes left, when they had really needed a score, but while Stanford had tried to run out the game, Gaffney had a Bolden-esque fumble of his own, where it was created with minimal contact.

The Beavs could not come up with more than a field goal though. On the ensuing series for Stanford they got down to 3rd and 1 where Ryan Murphy jumped the line like Troy Polamalu and stopped or at least disrupted the rush and the Beavs forced the punt, which Cooks returned and after busting several ankles was caught by the punter. 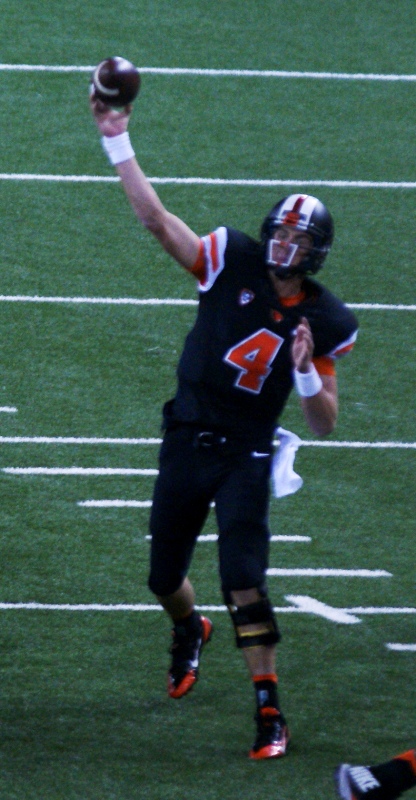 Mannion, above, Oregon State would drive down the field to the Stanford 7 with 20 seconds left. From there it was four consecutive shots to the end zone, all of which fell incomplete. The last one hit the hands of Kevin Cummings and was knocked loose by a Stanford defender.

Mannion finished having completed 41 of 57 passes, for 271 yards, the first time he's been below 350 yards this season. Mannion also again didn't throw an interception, but the 8 sacks lost 60 yards, exactly negating the combined rushing yards Storm Woods and Ward were able to accumulate.

Hogan's 8 of 18 for 88 yards effort, with only 10 net yards on 5 carries seems to pale in comparison, though his 23 yard run in the drive in the seconds before halftime was as integral to the outcome as any play all evening. But he is now 12-1 as a starter, and more importantly, now 8-0 against ranked opponents, plus a Rose Bowl win.

In the end the better team won, the Beavs did not play up to their potential, and Stanford played a game in which they made a single mistake which was only equal to the fumble by Bolden. The Beavers had a chance to win, but were stopped by a myriad of mistakes from the offensive line, which gave up a whopping eight sacks. Several of those were coverage sacks where Mannion did not just throw the ball away and paid for it. This will put a damper on the Heismannion campaign as well.

This game was not Riley's best effort as well; this game was a case of him being overly aggressive and not just taking the points against a sturdy defense like Stanford. He also called an interesting game on offense, with 24 rushes to 57 pass attempts, where the running game was actually beginning to open up for part of the second half. There were also few called deep shots, even when the safety had come up for a blitz and there was no one to cover the cornerback. 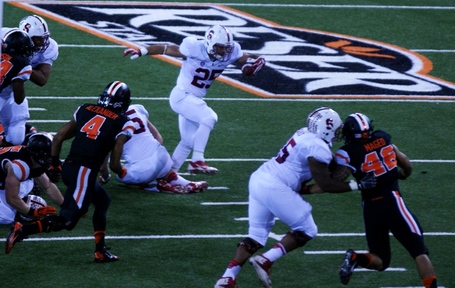 The defense struggled to stop Gaffney, above, in the second half as well, after stymieing him in the first half. He was routinely gaining 5 yards on first down, although also had several series where he could not earn the first down.

Gaffney finished with a game high (in any form) 145 yards on 22 carries, and all 3 of Stanford's touchdowns.

The defense played a good enough game to win, but for the first time this season came up short on offense, although even on his worst night of the season Brandin Cooks still had 9 catches for 80 yards and a touchdown. One catch was even worth negative seven yards, so he should have had even more.

The Beavs had a chance to win tonight but in the end Stanford executed a little bit better, and that was the difference in the game.

As a result, the Cardinal are 7-1, and 5-1 in the Pac-12, in second place in the Pac-12 North, as they enter a bye week in preparation for their showdown with division leading Oregon (8-0, 5-0). The Ducks broke open a 14-all halftime tie against UCLA with 4 unanswered touchdowns, enroute to a 42-14 win in the first half of the ESPN double header.

The Beavs dropped to 6-2, and 4-1 in the Pac-12 North, in third place. Oregon St. has a short week to prepare for USC, who will be in Reser Friday night for another night, but relatively early, 6 PM start. The Trojans rode a dominant defensive performance to a 19-3 win over Utah, in a game that featured 5 field goals (an offensive tool Coach Riley might want to consider utilizing).