The combination of assistant coach Brent Brennan (who hails from San Antonio), Oregon St.'s Alamo Bowl exposure, and maybe a little notoriety the program has received via Jacquizz Rodgers, a well-know former Beaver playing today for the NFC Championship with the Atlanta Falcons, continues to pay recruiting dividends.

Oregon St. has received another commit from Texas, this one from WR Hunter Jarmon, from Midway High in Waco, TX, who becomes the 4th Texas player to join the Beavers for next season.

Jarmon, shown above making a catch against in the Panthers' Dec. 1 41-34 win over Abilene in the Texas 5A playoffs, visited for the Oregon St. win over Arizona St., and decided to commit after Brennan paid him a home visit this past week. Jarmon announced his decision Friday night. 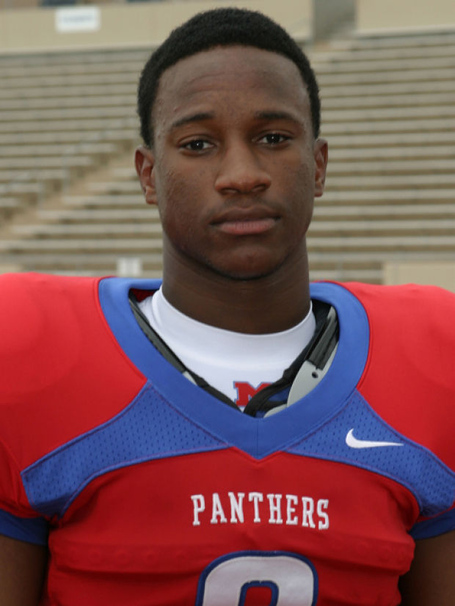 A better indicator of the significance of Oregon St.'s securing Jarmon are the 11 other FBS schools that had offers out to him. The Beavers beat out Bix XII schools Baylor, Texas Tech, Kansas St., Iowa St., and Kansas, as well as Missouri from the SEC, other home-state programs SMU and North Texas, plus Tulsa, Minnesota, and Pac-12 rival Washington St. (and this just a week after he visited Coach Mike Leach, architect of the Air Raid, in Pullman).

Jarmon appears in the season promo package for the 2010 season that Midway High produced:

Jarmon has also mentioned a desire to try to play baseball for Oregon St. as well.