Oregon St. overcame their own inability to finish off productive drives, a substantial size advantage, several shanked punts, and even a brutal piece of officiating late in the game to throttle #13 Wisconsin, and pull out a 10-7 win that was much more dominating than the score suggests.

A look at the stats that show the Beavers out passed, out rushed, and out-possessed (by over 11 minutes) the Badgers gives a clearer picture of how it happened, and the key partial stat of the game, that Wisconsin, with the top returning rusher in the country in Montee Ball, had 7 net rushing yards through 3 quarters.

But while dominating the stats and the game can help a team win games, it doesn't guarantee it will. And when the Beavers got only 3 points out of 4 first half drives deep into Badger country that all had the potential to put up the points that would have had the game put away by midway in the second half, it left the door open for the game to be decided by video review of the kickoff at the end of the 4th quarter.

But what did win the game for Oregon St. were out-hitting and out-coaching Wisconsin.

When Feti (don't call me Unga) Taumoepeau delivered a bone-jarring hit on Jared Abbrederis late in the second quarter, he didn't just break up the pass, he delivered the message that the Beavers who have faded badly often in the last couple of seasons were instead going to not only stand and fight today, they were going to carry the battle to their opponent.

Taumoepeau also redirected Abbbrederis, Wisconsin's best receiver, to the hospital. Not coincidentally, 3 plays earlier, is was Abbrederis that took advantage of the inexperienced Oregon St. safeties, Tyrequek Zimmerman, who was playing place of the injured Anthony Watkins, and Ryan Murphy for what was the biggest play to that point for Wisconsin, a 26 yard completion on a crossing route behind the Beaver linebackers.

When Wisconsin tried to bring Abbrederis across the middle again, but shallower, Taumoepeau was waiting. 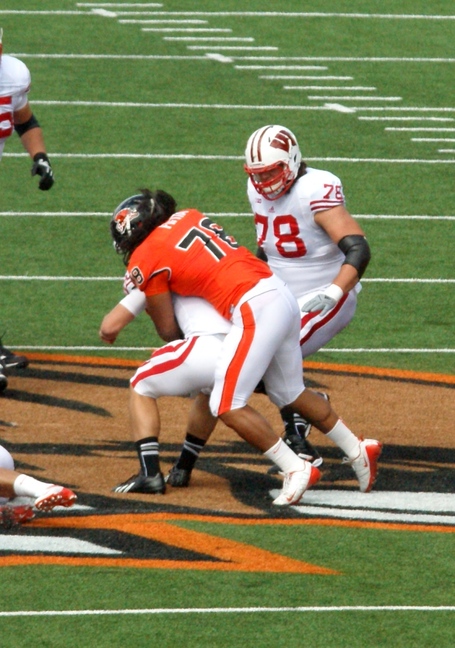 It wasn't the only big hit of the game, as Oregon St. three times sacked Wisconsin quarterback Danny O'Brien, including above, by Castro Masaniai, and below, by Jordan Poyer. 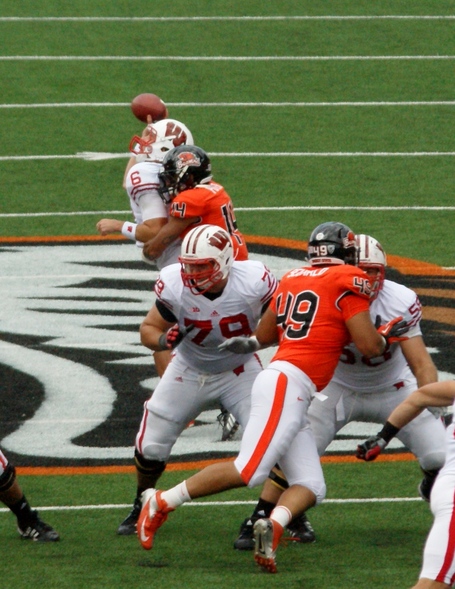 Credit for Oregon St.'s defensive success is in part due to an effort by the players not approached probably since the dominating win over California 2 years ago. But it was also in part due to a trio of defensive coaching decisions that set the stage.

Poyer's sack was possibly the best example of the effects of some creative defensive alignments that helped confuse O'Brien, who had completed 19 of 23 passes last week, but managed only 20 completions on 38 attempts against the Beavers, as well as getting sacked 3 times.

Poyer came unnoticed and unchallenged on an edge rush after Oregon St. had moved outside linebacker Michael Doctor into the middle, and put D.J. Welch down in a 3 point stance at the DT position. The result was confusion about what to do on Wisconsin's part. And it explains how Poyer, someone no opponent would ever want to lose track of, was able to do so. 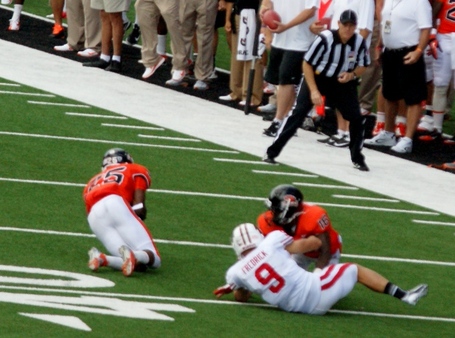 New defensive backs coach Rod Perry put defenders in position to make plays all day, and no one did a better job of taking advantage than Murphy, who undercut the route for the interception above, and had another chance for one later in the game.

The Beavers' dynamic defensive end duo also got into the act, when Dylan Wynn hit O'Brien, and forced a fumble, and Scott Crichton recovered the ball, putting a stop to a Wisconsin drive that had extended inside the Oregon St. 10 yard line midway in the third quarter.

And Welch had a brilliant overall game, co-leading the Beavers along with Zimmerman and Rashaad Reynolds with 7 tackles, including 2 for a loss. 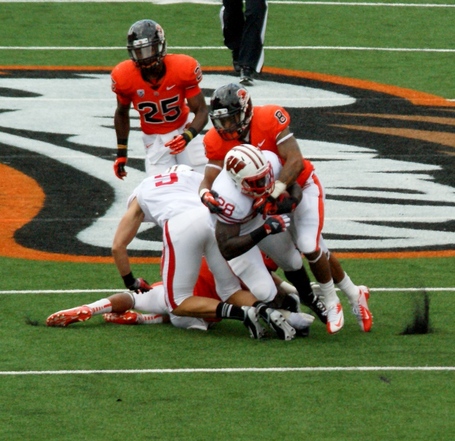 As a result, Ball frequently found himself bottled up, like above by Zimmerman.

Oregon St. also made multiple fourth down stops, including stopping ball cold behind the Wisconsin offensive line that averages 6'6", and 328 lbs., something that would seem impossible at first glance.

The stellar defensive performance was a product of both the significantly greater speed the Beavers fielded, but also the defensive decision of the game, to rotate 2 units on the d-line, as well as cycling extra linebackers, frequently and throughout the game.

Of course, it helps to have enough players that Banker trusts to get the job done.

Ball still finished as the game's leading rusher, with 61 yards on 15 carries, but this is the guy that ran for 1,923 yards last season, an average of over 137 yards per game.

The result was the biggest win at Reser, in front of 42,189 fans, since Oregon St. knocked off top ranked USC in 2008. It was also the first win at home against a ranked non-conference opponent for the Beavers since beating BYU, coincidentally also ranked #13 entering the game, in 1997. 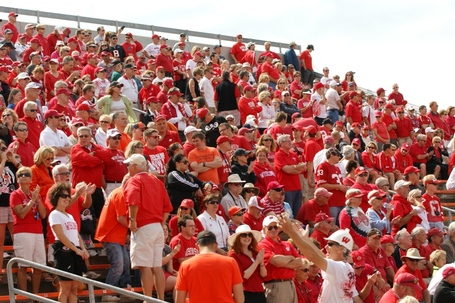 Oddly, the crowd wasn't even in the top 20 all time at Reser, in terms of size, given the profile of the opponent, and the substantial contingent of Badger fans on hand, above, larger than the visiting contingent of probably any game other than BYU last year, and some Washington games. (Civil Wars don't draw that many Oregon fans because many Beaver fans will resell any ticket except this one.)

Offense Still Not What Will Be Needed

Oregon St. only ran for 78 yards on 30 carries, though that included the 16 yard loss that resulted when punter Keith Kostol couldn't handle an off-line snap. Malcolm Agnew, below, wound up as Oregon St.'s leading rusher, with 45 yards on 11 carries, while starter Storm Woods went for 36 yards on 9 carries. This was an improvement compared with much of last season, and the Wisconsin defensive front is the strength of their team. But more improvement will be needed before the Beavers face UCLA in 2 weeks. The Bruins improved to 2-0 tonight with a 36-30 win over #16 Nebraska, in the other game today featuring a ranked Big 10 team visiting a Pac-12 squad.

Quarterback Sean Mannion completed 29 passes for 276 yards, and the Beavers' only touchdown, to Brandin Cooks, below, in the third quarter, but needed 47 tosses to do so. 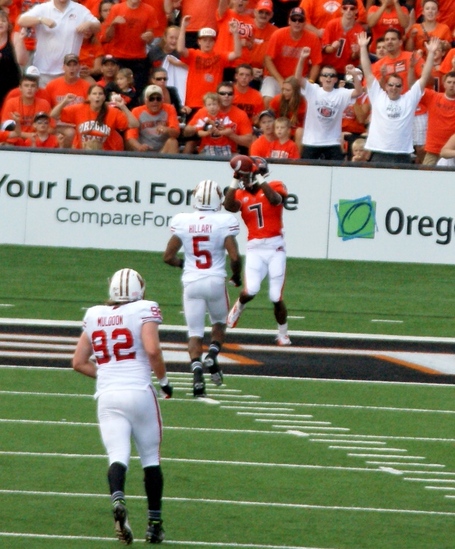 Some of those incompletions came when Mannion opted to throw the ball away earlier than he needed to, though it was much later in the play than Mannion ever experienced in many a game last season. The good new is it has been a while since Oregon St.'s pass protection has allowed the time to make as many reads and check-downs as happened today. 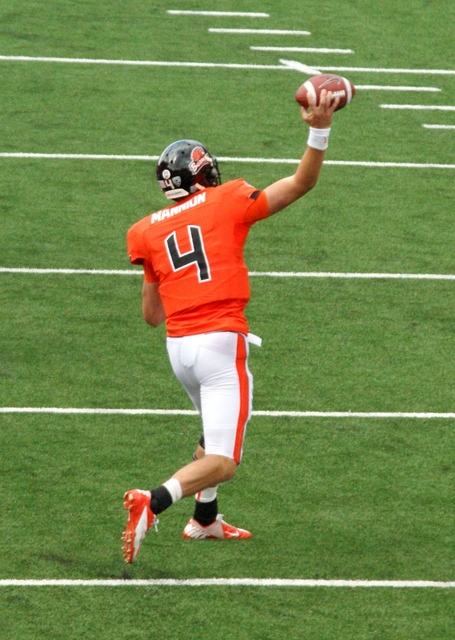 Mannion, above, started strong, but seemed to lose some confidence and accuracy at times, throwing behind receivers on several occasions. When tight end Colby Prince, known for being timed using a calendar, out-runs the pattern, you know the throw didn't have enough lead on it!

But considering this was Oregon St.'s first game, its reasonable to assume that adjustments will be made in the next 2 weeks. Woods even noted after the game that the extra week of preparation for Wisconsin was a help, and that the Beavers will go to work right away on plans for UCLA.

While Cooks was coming up with early catches, possibly aided by the lack of game tape to exchange, and the touchdown, and finishing with 80 yards on 6 catches, plus 13 yards on a pair of sweeps, it was actually Wheaton that was the receiver of the game, with 87 yards on 8 carries. 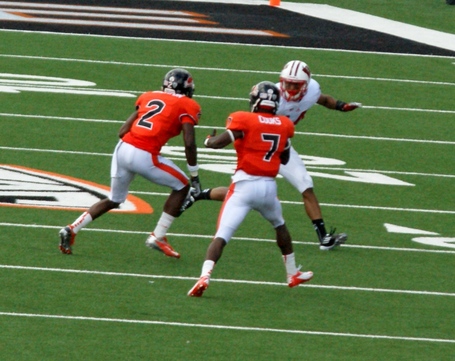 And Wheaton's blocking down-field, as above, had a huge amount to do with several of Cooks' more successful plays.

One of the unexpected moves Riley made coming out of fall camp was the announcement that walk-on Keith Kostol had beaten out Tim McMullen to be the punter. How long that lasts after a pair of very poorly shanked punts that caused serious shifts in field position, along with the mis-handled long snap, will be important to watch going forward.

A Few Words About Officiating

In non-conference games between the Pac-12 and most other major conferences, the visiting conference provides the officials, so the game was worked by a Big 10 crew.

That produced a dramatically differently officiated game than most Pac-12 observers and players are used to, ranging from play clock management to the definition of what constitutes holding, to the hot topic of the day, pass interference.

For much of the game, it was hard to fault the field crew, though its something Oregon St. could stand to work on. The first hotly debated situation, a non-call that stalled a Beaver drive, did look a lot like numerous plays seen before in Big 10 officiated games, where considerable contact continues to be allowed. It's just that Pac-12 observers are all used to that play not only being flagged by all 7 officials, it was one that 3 of them would have gone to the equipment bag to get an additional flag to throw as well. It also underscores that its a problem the Pac-12 needs to address more than it was a problem with the Big 10 crew.

But the pass interference call on Welch, below, that extended Wisconsin's touchdown producing drive, was simply brutal. 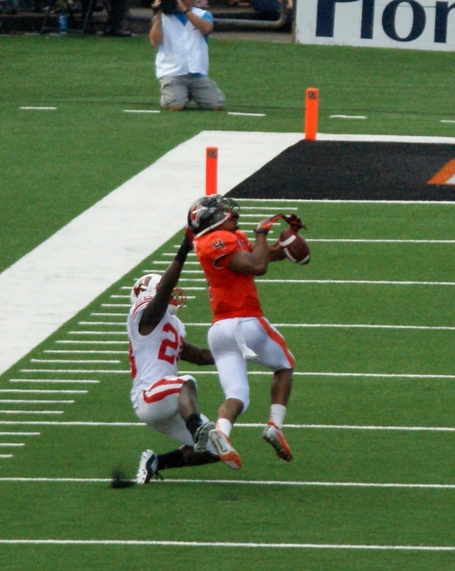 This is PI on the Oregon St. player, and not the Wisconsin player? As can be seen, Ball grabbed Welch by the helmet to prevent what could have been a game ending interception. With the contest on the line, Ball's action was perfectly reasonable. To not only miss that, but to penalize Welch, almost altered the outcome of the game, and in error. Its hard to argue visual evidence as anything but partisan officiating under the circumstances. Fortunately, it wound up only a footnote, but imagine what if.

Instead, the game still produced an opportunity for Beaver Nation to take to the field, but to celebrate instead of head-hunt. 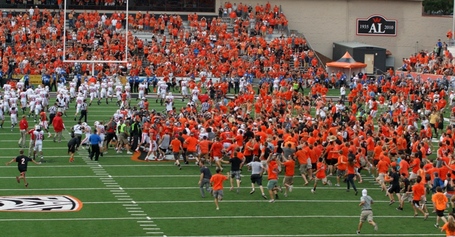 Changes To Pregame Program A Success

The move of Fan Fest for kids to the practice fields, and the relocation of Beaver Walk to approach the Valley Football Center from 30th. Avenue both have to be declared successful, but the opening of the Truax Indoor Practice Facility to all of Beaver Nation was a resounding success story.

And while that's both true, and long overdue, it was a big improvement to the pregame atmosphere, and will be even moreso once bad weather drives more fans in from tailgating, which was conducted in tremendous weather today.

It was actually the second consecutive solid win in home games for Oregon St., after the Beavers beat Washington in the last home game last season. A streak! A much needed win! And a LOT of fun! 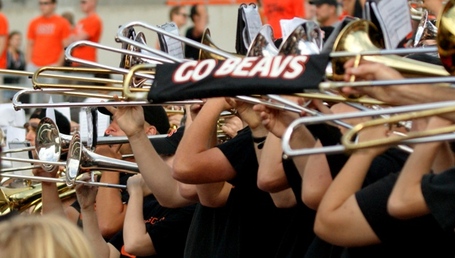