After dominating the first half without putting Arizona away, eighteenth ranked Oregon St. had to come from behind 3 times, including twice in the fourth quarter, before finally putting away the road win that established head coach Mike Riley as the winningest coach in Beaver history, as well as In-And-Out Burgers' best customer. 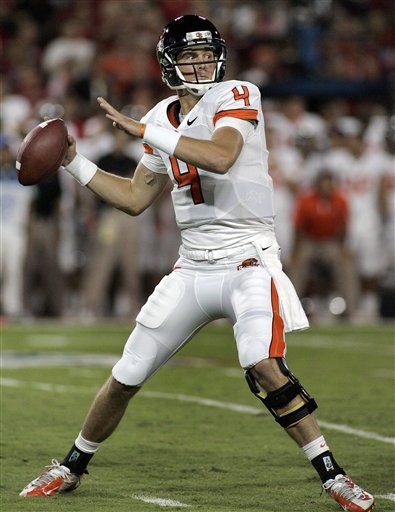 Oregon St.'s Sean Mannion had a career night in leading the Beavers

It took the second consecutive career best game from both quarterback Sean Mannion, who completed 29 of 45 passes, for 433 yards and 3 touchdowns (and with no interceptions), and wide receiver Markus Wheaton, who caught 10 of Mannion's passes, for 166 yards, and 2 of the touchdowns. 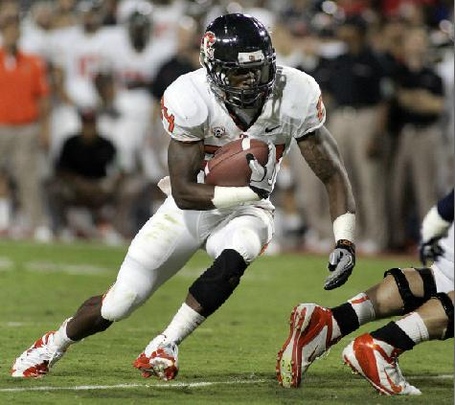 game by far on the ground since well before Jacquizz Rodgers finished his career.

And it took a break-out performance by Storm Woods, who ran for a game and career high 161 yards, and a touchdown, on 29 carries.

And it took an interception by Rashaad Reynolds, who had already recorded a team high 10 tackles, that allowed the Oregon St. defense that had dominated the first 2 1/2 games of the year, only to be torched by Arizona's Matt Scott in the second half, to re-establish itself, and finally save the night, the win, and the streaks over the 'Cats. The Beavers have now won 6 in a row in Tucson, 3 in a row over the 'Cats, and 12 of the last 14 meetings with Arizona.

It also took a tremendous job of play-calling by Riley, who earned his 75th win that moved him past Lon Stiner into first place in Oregon St. history.

A massive amount of resolve to not give up no matter what, which has been the hallmark of this year's Oregon St. team, again came to the forefront as well.

And it came despite a 403 yard passing night by Scott, who completed 31 of 53 passes, as well as a 115 yard rushing effort on 17 carries by Ka'Deem Carey, who also had 68 yards receiving.

Beaver fans as well as the 'Cat faithful will be talking about and yelling about this one for a while. 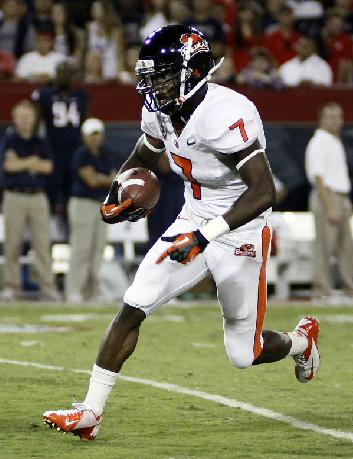 Wide Receivers Too Fast For Cats

It became apparent early that Wheaton and Brandin Cooks, who came up with 149 yards on 9 catches, were too fast for the Arizona secondary. Both ran out of what was often pretty good initial coverage again and again, for big play after big play. And when the 'Cats switched up their coverages in the second half, Wheaton and Cooks were still able to find openings, and extend plays.

It made it much easier for Mannion to direct long scoring drives, that covered 83, 84, 77, and in the fourth quarter, 86 and 75 yards, both of which when the Beavers were behind and needing a touchdown.

Early Drives Bogging Down Came Back To Bite The Beavs

The game could have been out of reach by halftime, but the Beavers bogged down three times in the red zone. A penalty bailed them out after one of Trevor Romaine's missed field goals, but another miss just before halftime, after Oregon St. had reached the Arizona 2 yard line, opened the door for Arizona's comeback, and also took Romaine out of the picture during both of the final scoring drives, when the Beavers needed a touchdown instead of a field goal to retake the lead.

Three different episodes of illegal procedure penalties immediately after a big play were a problem as well.

Both need to be corrected before they cost Oregon St. a game, something they unnecessarily came dangerously close to tonight.

It's hard to know how much was on the players, and what the Oregon St. coaching staff could or should have done differently, without being in the dressing room and on the sideline at the start of the second half. And Arizona and their coach Rich Rodriguez certainly deserve a ton of credit for both adjustments and their attitude.

But it was pretty clear that the Beavers were thinking they had this one in hand, and didn't come out of the locker room for the second half ready to play.

In front of a crowd of 44,153, most of which were 'Cat fans, Scott completed first down passes on the first 2 plays of the second half, and another 2 plays later, and Arizona was on its way to a 91 yard touchdown drive.

The Oregon St. offense was equally asleep at the switch, allowing a sack of Mannion on the fist snap, going 3 and punt, which set up Arizona for a relatively short 52 yard drive, which took only 3 plays, capped by a 24 yard run by Carey for the first of three go-ahead scores for the 'Cats.

It put the Beavers behind for the first time all season.

The perils of throwing at Jordan Poyer eventually became evident, however, as his acrobatic interception of a bouncing ball finally seemed to shake the Beavers awake.

Woods would carry 4 times in a row, and then for the touchdown as Oregon St. retook the lead, and the shoot out near the OK Coral was on.

It's always hard to fault extra effort, but Woods needs to know when to just go down once he has the first down. Had either that happened, or Pac-12 replay been competent to notice that Woods' knee was down before the fumble that resulted in a scrum, and ended with different officials indicating different teams had recovered the ball, Oregon St. might have sustained the drive instead of seeing Scott snatch the lead away from them again just before the third quarter ended.

However, Scott would have only one fourth quarter touchdown drive left in the tank, while Mannion had two.

Relative inexperience had a lot to do with it, but Oregon St.'s safeties made several mistakes that contributed considerably to giving up over 400 passing yards, and 545 total yards. It was Reynolds who, despite all his other heroics, got torched by the much bigger Dan Buckner for one of Scott's scoring strikes, but bad angles and being out of position by the safeties left the corners alone on islands they shouldn't have found themselves on.

Tyrequek Zimmerman in particular was a victim of his own inexperience, though Ryan Murphy's mistake opened the door to the deep out completion that set up Arizona's last scoring drive.

Fortunately, a number of the Oregon St. secondary's breakdowns are correctable.

Bubble screens and wide receiver check-downs were also a reoccurring problem for the Beaver defense, and the bubble screen in particular is an old nemesis (think BYU). Another issue to be concerned about with another passing mad scientist in Mike Leach coming to Reser next weekend, though the fightin, scrappin Cougs (2-3, 0-2) that put up a fight in the first half tonight in Seattle eventually were blown away by Oregon (5-0, 2-0) to the tune of 51-26.

Wheaton Much Of Why Beavers Won

The next to last touchdown Oregon St. scored was another blow by the defense job by Wheaton, but the two consecutive first down completions to Cooks earlier in the drive, both of which were extended by personal fouls, only worked, and created compromising conditions for the 'Cats, because of tremendous downfield blocks by Wheaton. And it was Wheaton's 28 yard reception that put Oregon St. in position for the game winning touchdown. 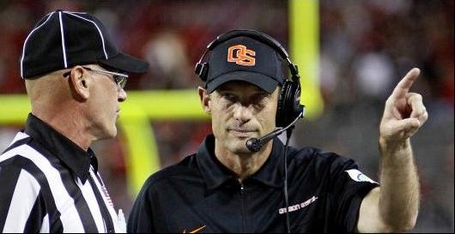 Oregon St. coach Mike Riley had his own opinions, sometimes differing from the officials,

about some of the night's calls. (AP Photo)

While it only brought him up to .500 in conference play for his career, Riley's record setting win did get Oregon St. (3-0, 2-0) off to their first unbeaten first month of the season since 2000, and the first ever under Riley's direction. The Beavers have 6 remaining home games, and only 2 remaining Pac-12 games on the road, setting them up for what could be a special season, in a year when most figured gaining bowl eligibility might be either a stretch, or a best case outcome.

And improved play calling, which punctuated the 4th quarter scoring drives, is the reason why. Makes one wonder why Riley ever gave it up, which resulted in giving up bowl trips the last couple of seasons. But credit where its due, the mistake has been corrected.

With 2 wins over at the time ranked opponents, and then this road win over once ranked, and still a 3 point favorite, Arizona, its arguably the best start to a season in Oregon St. history, when you factor in the quality of opponents.

At least for much of the evening, the Brewfest viewing experience was a disappointment, especially after the quality job done by the Beaver Dam last week at the Reser viewing party. An unprepared production crew that apparently never heard of doing a sound check couldn't get the sound working until well into the first quarter, and then it wasn't actually understandable until halftime corrections were implemented.

An apparently larger than expected turnout resulted in running out of some of the brewed offerings before kickoff, and others early in the game, and an HVAC system that was overwhelmed by midway in the first quarter.

A last minute decision to set up viewing for the Oregon-Washington St. game after the Oregon St.-Arizona game was underway wasn't a smooth move either.

With no useful sound system, the fact that the so-called flagship signal of the program from Corvallis is so under-powered at night that it wasn't receivable inside the arena once one got out of sight of the lobby windows became a problem. What it will take to get an FM carrier of the signal, and why it continues to not happen, defies all logic.

What was vs. what could be underscored that there is still a lot of work to be done.

The Pac-12 Channel, while a welcome addition, is not even a Fox Sports Network grade alternative either, and their color choices for the on-screen score/time/game status info. need rethought. Consistent use of replay and in-stadium production values both challenge the fledgling broadcast entity as well, though, like with freshmen football players, there is reason to believe/hope experience will lead to improvements there as well.

But despite some less than auspicious moments, at the end, it was a great night to be a Beaver! 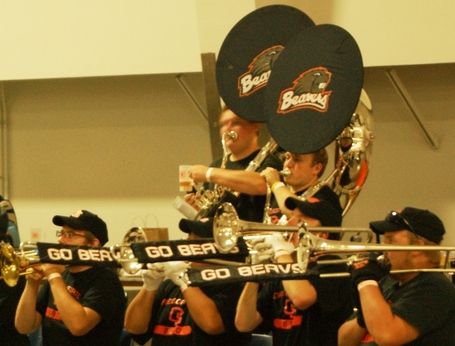