Share All sharing options for: Summing Up The Second Oregon St. Scrimmage

Last week's scrimmage was the sharper of the two, though the personnel deployments were different. Defensively, safety Anthony Watkins played today, including working at times with the 2s as well to get some reps in, but CB Jordan Poyer did not. And except for one 4th down and short package, Markus Wheaton was used only on punt returns.

The receiving group was fairly thin, as Obum Gwacham also sat out the scrimmage, with a tweaked ankle, and Micah Hatfield was also inactive, with concussion-like affects.

Malik Gilmore was the beneficiary, with 3 catches for 57 yards, and a touchdown, in his extra opportunities.

However, that doesn't account for at least 4 sacks, where the officials stopped play when the quarterbacks would have been downed had the defense not been under orders to not do that. There were also several completions where a defensive lineman peeled off, and in a real game, the ball never would have been thrown.

No interceptions are noted in the notes, but that's conveniently overlooking one, and there were a couple of near misses as well.

The summary also shows 1 field goal for Trevon Romaine, but after touchdowns Riley opted for longer place-kicks. A problem back at the office required me to leave a little earlier than planned, but I saw Romaine attempt 4 kicks from between 40 & 45 yards. All were easily long enough, but one missed wide right, and another wide left, and both by more than a little bit. 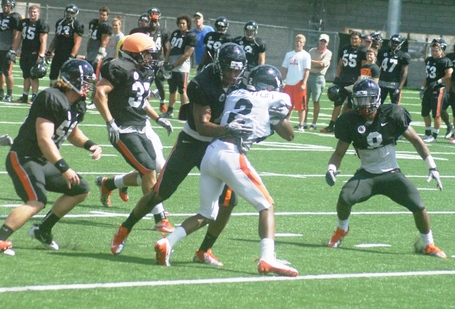 The good news in the kicking game is that punter Tim McMullen had good distance with great hang time, neutralizing Wheaton.

The running back battle still isn't settled, as Woods had the best day, but Malcolm Agnew also showed flashes of speed, and Jordan Jenkins is the best receiver out of the back field. Chris Brown, who has been a bright star some days, didn't get many touches today.

The pass to run ratio was a more balanced 3:2, but there were no big runs, and it looks like any big plays will have to come from the passing game this year. Both Woods and Terron Ward appear capable of picking up that one extra yard that might move the sticks instead of not, but despite not facing any blitz pressure, the offense struggled to generate many significant gains on first down.

The percentage of drives that resulted in scores has to be a concern for the defense, and until there is some creativity on display, patient offenses are going to be able to grind out drives. Given that Riley said "its all in", as far as the system goes, things still look awfully vanilla, though he was doubtless talking more about the offense than the defense. (I hope.)

So far, there has been no semblance of the defense throwing some (any?) of the different challenges that 3-4 and 3-3-5 looks present. Oregon St. has worked on some nickel, but still out of a 4 man front.

And at the same time, the defense hasn't had to deal with traps and counters, or any cut blocking schemes (like we know will be coming from BYU) that I've observed. These things are hard to adapt to just in game week preparation if you haven't seen much of it.

In other developments, fans searching for middle linebacker Feti Unga won't see "UNGA" on the back of a jersey this season. Oregon St.'s senior anchor in the middle will instead wear "TAUMOEPEA'' on above his number 41, in tribute to his mother. Taumoepea is her maiden name.

"If it wasn't for my mom ... pushing us, waking us every morning for games on Saturdays and after school, getting us ready to go to practice and stuff, I wouldn't be hear,'' 'Unga said. "She's been there throughout the whole journey, so one year out of all these years I've been playing, I'll use my mom's name.''

With the unexpected departure of Michael Beaton and Mana Tuivailala from the team for personal reasons last week, Riley announced today that scholarships will be awarded to senior cornerback Brian Watkins and junior defensive end Devon Kell. It's especially good to see for B. Watkins, who is in his 6th year at Oregon St. The Watkins have both earned their way up the ladder, going through both grey-shirt and red-shirt seasons, and working their way through special teams assignments on their way to getting on the field in the secondary.

Tomorrow will be the last double practice day of the year, with the usual 11 AM session, and one last evening, 6:30 practice.