Just a day after Penn St. removed the statue of deceased coach Joe Paterno from in front of Beaver Stadium, placing it in storage indefinitely, the NCAA has handed down penalties for the actions of former assistant coach and now convicted child abuser Jerry Sandusky, and the subsequent 14 year coverup that ultimately cost the school's Athletic Director Tim Curley, President Graham Spanier, Vice President Gary Schultz, and Paterno their jobs. 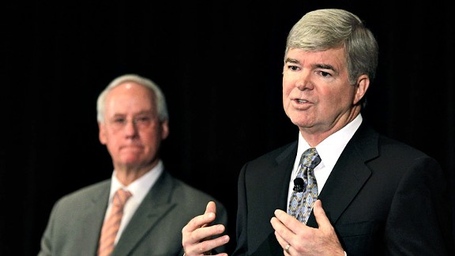 NCAA President Mark Emmert announced this morning in Indianapolis that Penn St. will be banned from post season, meaning both potential Big 10 Championship games, as well as bowl games, for 4 years. The Nittany Lions football program will also have a reduction of 10 new scholarships for 4 years.

Penn St. will also have to pay a $60 million fine, the approximate equivalent of 1 year's football generated revenue, which the NCAA will use to fund an endowed program for the treatment of child sexual abuse.

Penn St. will also be on NCAA probation for 5 years.

In addition, the NCAA vacated all 111 Penn St. wins from both the University and Paterno's records from 1998 thru 2011.

The University also must make several moves to beef up their compliance staff.

The NCAA did not issue a television ban, but reserved the rights to investigate further, and take additional actions against individuals, following the outcome of future criminal cases.

"In the Penn State case, the results were perverse and unconscionable," Emmert said. "No price the NCAA can levy with repair the damage inflicted by Jerry Sandusky on his victims."

Penn St. authorities have indicated that they will not appeal the rulings of the NCAA or the Big 10.

The biggest impacts will come from the scholarship reductions, which could, depending on how well the program does at retaining students, and how they have distributed their recruiting across recent classes, have moderate to fairly extreme impacts. Those impacts will extend beyond the end of the scholarship reduction period, as 4 years of reduced recruiting will take time to rebuild from.

The bowl ban will have an unpredictable impact on overall recruiting, as well as on donations and sales. How well the new staff does will be impacted by these moves, but will also interact with how serious these moves affect the program going forward.

The fine, while still, is managable. Penn St. has the money in the bank, so the check won't bounce. If the administration does their job, the impact can be spread across multiple projects and programs, and over time, preventing devastation in any particular area.

While some called for the "death penalty", where the football program would be suspended, the NCAA opted to not go in this direction. As Emmert noted, there would be numerous impacts on many who had nothing to do with the incidents or the ensuing coverup, ones that would do excessive damage.

Oregon St. President Ed Ray, who is also the chair of the NCAA Executive Committee, who was in Indianapolis for the announcement of sanctions, in support of Emmert, the former President of the University of Washington, issued the following statement:

"Does this send a message? The message is that the presidents and the chancellors are in charge. It is time for all universities to do a "gut check," and ensure that a proper balance is maintained between athletics and academics."

The moves by the NCAA are among the most severe ever handed down, but also repersent an unprecedentedly quick decision, in sharp contrast to the usual lengthy inquiry, investigation, and hearing process, followed by sometimes lengthy deliberations, and then sometimes an appeals process, after sanctions are handed out. The nature and severity of the criminal events, being personal assaults, never mind involving children, are obviously of a completely different nature than the rules violations and [relatively] low level transgressions the NCAA is normally dealing with, warranting a swifter, as well as more severe, response.

The NCAA Division I Board of Directors and the NCAA Executive Committee granted Emmert the authority to punish through the nontraditional methods.

"It was a unanimous act," Ray explained. "We needed to act."

It will, however, be important to see if the NCAA will act faster in the future on other matters, behaving more like the professional sports sometimes do. Lacking staff to do investigations when there isn't one done by others, like the Freeh report in this case, this would seem unlikely, though we could be seeing a landmark development that starts the wheels turning toward both a more proactive, and faster to react NCAA.

Given the alignment of the Big 12, Wisconsin would seem to benefit the most from these moves, as the Badgers become easily the premier program that is eligible for the post-season in the Leaders Division, opposite the more stacked Legends Division, where the conference's other marquis programs, Michigan, Michigan St., Iowa, and Nebraska, all reside.

The Big 10 Conference has announced that it will withhold Penn St.'s share of bowl revenue (the Big 10 has a bowl revenue sharing policy in place) for 4 years as well, which is estimated to be an additional $13 Million.

The financial impact is beginning to spread across the university, as Moody's Bond Rating Service has notified Penn St., who currently has the second highest rating possible, that they are considering downgrading the university's rating, citing concerns about the ability to raise and sustain funding.

The concerns are legitimate, as State Farm Insurance has announced they are cancelling advertising on Penn St.'s broadcasts.

The bond rating impacts the cost of capital projects as well as their scale and timing, and that in turn impacts the university's ability to deliver quality, outside as well as inside the athletic department, as well as affecting local contractors and businesses. This can in turn impact recruiting and retention campus wide, just at a time when applications and enrollment are at an all-time high.