Share All sharing options for: Former Beaver Great Passes Away

Former Oregon St. offensive lineman and assistant coach Rich Koeper passed away las Saturday from complications and effects of a heart attack. Koeper was a native of Redwood City, California, but lived in Corvallis once his professional football career ended. Koeper was 66. 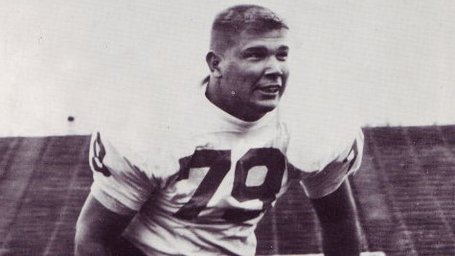 Koeper, shown above with the old north side of then Parker Stadium in the background, starred during one of the great eras in Oregon St. football, from 1962-1965. Koeper, after a highly successful stint for Sequoia High, undefeated in 1959 & 1960, blocked for Terry Baker during Baker's Heisman trophy run in 1962, and played in the 1962 Liberty Bowl, the 1964 Hula Bowl, and was also a member of Oregon State's last Rose Bowl team, in 1965.

Koeper was selected first team All-Coast as a sophomore, All-Pac-8 pick as a senior, and was named a Second-Team All-American by the Associated Press his senior year.

Koeper went on to play professionally with the Green Bay Packers and the Atlanta Falcons in the NFL, and with the British Columbia Lions of the Canadian Football League.

Koeper returned to Corvallis to served as a full-time assistant coach for coach Dee Andros and the Beavers from 1973-75, and later worked for Hewlett-Packard.

Koeper was inducted into the Oregon State Hall of Fame in 1991.

RIP Rich, and sincere condolences and best wishes to your family.