Share All sharing options for: Best Heisman Winner To Add To Your EA Sports Football 2013 Team

EA Sports NCAA Football 2013 is out, and one of its cool features gives players the opportunity to import any Heisman Trophy winner onto your team. A number of us were asked who we would choose, and its easy to be a "Pac" homer on this one, with 10(*) Heisman winners from the conference in the last 50 years, starting with Oregon St.'s own Terry Baker, the first winner from the west in 1962, and I've seen 8 of them. (Unfortunately, I've only seen historic film of Baker, and only saw USC's Mike Garrett, the 1965 winner as a pro.)

USC of course provides most of the candidates, with 7(**) winners, along with UCLA's Gary Beban in 1967, the first one I saw as a collegian, and Stanford's Jim Plunkett in 1970.

(*) I'm not counting Colorado's Rashaan Salaam in 1994, because while the Buffs are now a member of the Pac-12, they were far from it in those days.

In addition to Garrett, the Trojans also had O.J. Simpson (1968), who might have been the first repeat winner that year had the Beavers not contained Simpson and upset USC 3-0 in 1967, Charles White in 1979, Marcus Allen in 1981, (both excellent choices as well if you are looking for a "franchise" RB), and then QBs Carson Palmer in 2002 and Matt Leinhart in 2004.

(**) Some purists will note that the Trojans' Reggie Bush eventually vacated the 2005 Heisman. They are the same ones that will also note how USC had to vacate 2 wins from their undefeated 2004 Championship season. And while that's true on paper, it doesn't change what happened for real on the field, including on a foggy November 6 night in Corvallis in 2004.

Bush is my choice for the Heisman winner, never mind one from the Pac, that I would add.

The reason is the magic factor Bush brought to the field, including that night. You would be hard pressed to find ANY team that wouldn't be better with the addition of ANY Heisman winner in history; they are on the list because of what they could do. Further, the list of those deserving to be on that list that were left off is long too, but we'll discuss that across SB Nation next week.

But while some players have posted numbers making them worthy of accolades such as the Heisman, occasionally one comes along that makes the difference even on the nights when they don't post big numbers. Bush was one of them, and what he did that foggy November night was one of those nights.

The Beavers had bolted to a 13-0 lead early in the second quarter, as Derek Anderson got off to a good start on what would eventually be a 330 yard passing night, and still held a 13-7 lead at halftime, after Leinhart had found Dominic Byrd for USC's first score of the night.

USC had taken a 14-13 lead early in the second half, when Leinhart hit Byrd for another score, but with the fog (and even a possum) rolling across Reser Stadium, the sense in the crowd was that the undefeated Trojans were in trouble after the Beavers forced USC to settle for a 45 yard field goal that faded into the fog early in the 4th quarter. The feeling was that Oregon St. was a big pass play by "'Poose" away from taking back control of the game.

At least until Bush had his highlight moment of the night. The Beaver defense did a solid job of shutting down Bush that night, allowing him only 88 rushing yards. 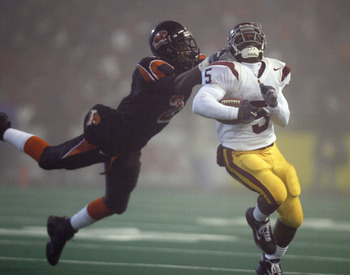 But Bush was also the Trojans' ultimate weapon as a punt returner, and when Anderson's first drive of the final period stalled, Bush delivered what some have listed as one of the top 50 or so plays in college football history.

"We've been in this position before," Bush said. "There was no doubt in our minds we were going to come back."

Sam Paulescu's punt sailed into the dark sky, almost disappearing in the fog, but down in came on the USC 35.

Bush took the ball to the left side, but Bush rarely wound up where he first headed, and his cutting ability led to a diagonal route across Reser that actually covered probably closer to 90 yards before he was done. Nearly every member of the Oregon St. punt team had a look at Bush, but none laid even a finger on him, and he could have run on up the ramp, out the west side parking lot, and gone all the way to Philomath, and Beaver Nation would never have caught up.

"That guy is incredible," Oregon St. wide receiver Mike Hass said afterwards. "You've got to give him credit on that, he kind of made it happen all by himself. That's why he's a Heisman Trophy candidate, and he showed that tonight."

The Trojans would go on to pull out a 28-20 win, the only game the Beavers lost after mid-October that year, when they won 6 of 7 games, culminating with a 50-21 Civil War win over Oregon, and a second bowl game beat down of Notre Dame, a 38-21 triumph in the Insight Bowl.

And USC, of course rolled undefeated the rest of the season, including a 55-19 rout of Oklahoma in the Orange Bowl. A win that the Trojans wouldn't have had a chance to get had the Beavers been able to upset them as happened the next two time the teams met in Reser. But also a possibility that effectively ended with Bush's magic.

"All of a sudden, we got Reggie Bushed," Oregon St. coach Mike Riley said, summing up what happened to a number of opponents in Bush's spectacular career.

This post was sponsored by EA Sports NCAA Football 13. Check out the video for the game below.