Washington Too Strong For Oregon St. In WNIT

Share All sharing options for: Washington Too Strong For Oregon St. In WNIT

The third time was the charm for Washington, as the bigger, more physical Huskies prevailed over Oregon St. for a 55-49 win in the third round of the WNIT Tuesday night at Gill Coliseum. After losing both regular season contests, both by 5 points, Washington, and especially Regina Rogers, were able to overpower Oregon St. inside, and this time the Beavers weren't able to generate the outside scoring to overcome it.

Oregon St. led most of the first half, but neither team ever established control in the close, low-scoring affair, though the Beavers did take the largest lead of the game, 14-5, on a Thais Pinto basket a little over 6 minutes into the game.

And after the Beavers turned the ball over on both of their last possessions before the break, Washington's Mollie Williams made 2 free throws with 1 second left to tie the game at 25 apiece. It was a indicator of things to come. 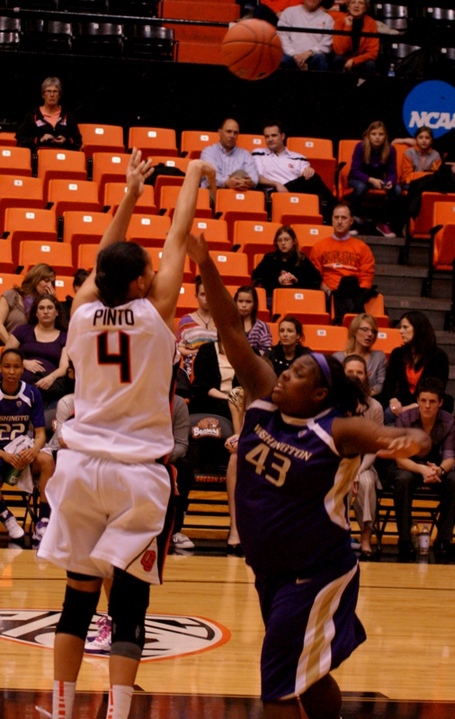 Thais Pinto gives Oregon St. their largest lead of the game in the first half.

Oregon St. became tentative offensively in the second half, and Washington went on a 15-2 run to move from down 34-28 to up 43-36 in a little over 6 minutes.

But Oregon St. missed 4 3 pointers, and suffered a turnover, in their final 6 possessions, scoring only on an uncontested Marchbanks layin.

Meanwhile, Williams made 5 of 6 free throws in the final half minute, and it was the Huskies who moved on to the WNIT quarterfinals, and the Beavers whose' season came to a close. 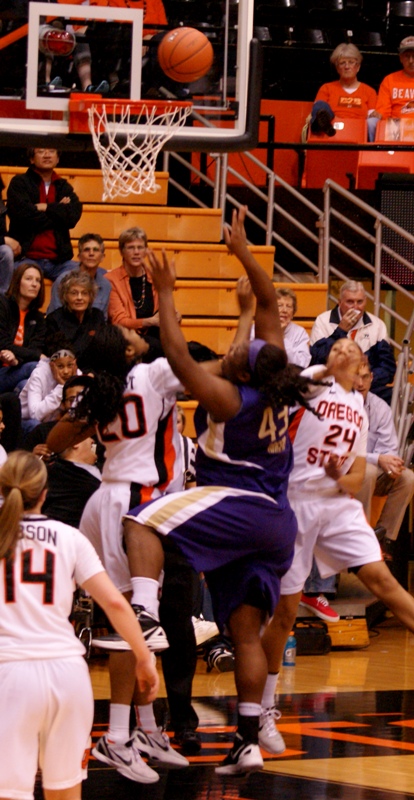 Rogers, above, muscled her way to a double double, including a game high 23 points, and 11 rebounds, but also largely neutralized the Oregon St. post game. Though Patricia Bright still managed to be effective defensively, with 7 blocked shots, which gave her 115 for the season, second most ever by any Pac-10/12 player, she only scored 2 points, got 0 rebounds, and fouled out with nearly 5 minutes left.

Pinto finished with only 4 points and 6 rebounds, slowed with 4 fouls for the last 7 1/2 minutes of the game.

Marchbanks went out battling, with 20 points and a game high 12 rebounds, her 7th double double of the season, but she didn't get enough help. 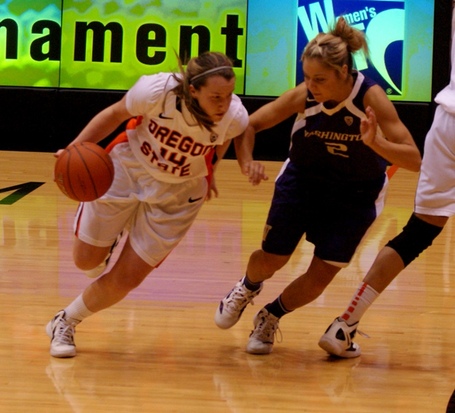 Ali Gibson, above driving against Washington's Kellie McCann-Smith, posted 11 points, and Sage Indendi 10, but Alyssa Martin was shut out. The 3 starting guards in the Oregon St. 3 guard offense collectively made only 7 of 31 shots, and just 3 of 20 3 pointers.

Williams added 12 points for the Huskies, including 7 of 8 at the free throw line.

The inside game advantage Washington leaned hard on resulted in their getting to the free throw line 26 times, where they were successful 17 times. Though Oregon St. shot 86% at the line, they only got there 14 times, making 12.

Washington improved to 20-13 for the season, and will next play the winner of the San Diego at Texas Tech game on Thursday.

1,150 fans, easily the largest crowd of the 3 WNIT games played this year at Gill, turned out to see Oregon St. finish the season with a 20-13 record, only the 4th time in the last 20 years the Beavers have reached that milestone.

"It is incredible what this group has done," head coach Scott Rueck said. "We didn't have a team two years ago."

(There were only 2 players left in the program when Rueck came on board.)

"And here we are with only the fourth season in the last 20 years where Oregon State has achieved 20 wins. This team broke records all year long; for example we have the second-best shot blocker in the history of the Pac-12 conference (Bright), and, we have a first team All-Conference, and All-Freshman, and a top defensive player (Gibson). What this team did was incredible this year, which cannot be understated. I am most proud of the way we did it, and what it does to our future. The legacy of this team will live on here, and they have moved us a couple steps ahead in the rebuilding process."

Marchbanks finished her 2 year career at Oregon St. with 675 points, 417 rebounds and 186 assists.

"I couldn't be more proud," Marchbanks said. "Coming here was definitely a good decision. Looking back at last season and this one shows a complete turnaround. I am so proud of the team, and of everything we have worked for. We come into the gym, and we are ready to learn and work hard. We have done that all year and proven it on the court. To lose now hurts, but to get to the WNIT and into the Sweet 16 is more than a lot of other teams can say that they have done. Overall, I am very proud of us."