The Beavers lost a heartbreaker in the continuation of Saturday's nightcap; trailing by as much as 6, but clawing back and having the lead twice, only to lose in extras. Thankfully the final game of the series was better, the Beavers coming from behind to win 8-6.

Had the last run of game three been scored by the Beavers, it would've created an early candidate for game of the year; despite its early season sloppiness, and according to assistant coach Pat Bailey, terrible home plate umpiring. Unearned runs were a theme of the day, between the two teams, 10 were score, and 7 of those went on OSU starter Dan Child's line. Other than that, Child gave up just one run, while scattering 9 hits over 6 innings.

The Gaucho's started off the scoring in the 2nd, pushing across 3 unearned runs after a play in which 2nd basemen John Tommasini and Tyler Smith both made an error.

In the third, Jake Rodriguez caught yet another man stealing, adding to his up-and-down weekend. Although his .222 batting average isn't absolutely horrid when considering sample size, he struck out a crazy 9 times over 4 games, many of which were with RISP, when putting the ball in play is key. But, he still managed a respectable 3 RBI's. He also showed off his great arm, picking a man off second, and stopping many Gauchos from stealing a base. One can only figure (and hope) his offense will pick up, after he performed well last year, but was injured for a chunk of the season.


The Beavers scored their first runs of the game, unearned of course, in the 4th, Dunn struck out with two outs, but a passed ball allowed him to reach first. Dylan Davis walked, which Sam Montgomery and J-Rod both followed up with RBI singles, pulling the Beavers within one.

UCSB anwered back in the bottom of the frame, scoring 5 runs, the first of which was the lone earned run of Dan Child's day. After a leadoff double, Child fielded a sacrifice bunt, but misfired to first, scoring one run, and advancing the batter to third. A sacrifice groundout scored him, and after two more men reached base, Brandon Trinkwon hit a three-run homer, extending the UCSB lead to 8-2.

In the 7th inning of a now 8-3 game, Joey Matthews and John Tommasini walked to leadoff the inning, followed by a Ryan Barnes bunt single with two errors added, and the game was 8-5. After another walk, and a 2-RBI single by another Beaver who struggled overall, cleanup hitter Ryan Dunn, it was 8-7. Dunn went 1-16 (.062) on the series, and unlike J-Rod, who was dropped way down in the lineup, senior captain Dunn stayed in the 3 or 4 spot.

The 8th started the same way as the previous inning, and once again Barnes was batting with Matthews and Tommasini on first and second. Barnes AB also created another run-scoring error, and pinch-hitter Jordan Dunatov followed that up by hitting a 2-run single. The Beavers continued to threaten, but couldn't score any more runs, and the inning ended with the Beavers leading 10-8.

Again the Gaucho's answered back in the bottom of the inning, against Scott Schultz, who relieved Carlos Rodriguez after he went one scoreless inning in his Beaver debut. Schultz wasn't as fortunate, as he surrendered 2 runs (1 earned), while recording just one out. With one out and runners on 2nd and third, 5'9" freshman Matt Fielding entered his first game for the Beavers, with similar results as Schultz. He got nobody out, while giving up one run (earned), and seeing both inherited runners score. Tony Bryant relieved him, and ended the inning with a strikeout and flyout.

The Beavers went into the 9th down by one, and come out up by one. The rally started with a John Tommasini single, and he was a bright spot on this Beaver team. After starting nearly the whole season in his sophomore season, Tommasini injured his arm early into his junior year, knocking him out for all of that season. He redshirted last year, and is fully healthy to start his 5th year as a Beaver. He was 4-12 (.333) on the series, and walked 6 times. He also scored 6 runs, and had 3 RBI's, although his defense was shaky at times. Ryan Barnes walked, and Danny Hayes came up big for the Beavs, hitting a 2-run double, giving the Beavers a one run lead.

Unfortunately, in the bottom of the 9th, with two outs, Ryan Palermo hit a solo home run, which has a story behind it, which was told by Pat Baylis. Leftfielder Ryan Barnes had the ball in his glove, but his glove hit or got caught up in the "net" (unclear on where exactly this net is), which propelled the ball over the fence. Tony Bryant finished the game after pitching 2 and a third innings, giving up one run on three hits.

After a 17 hour, 50 minute break, the game continued, and OSU sent Taylor Starr out to the mound. He pitched well, but couldn't hold off the Gauchos forever, which is what it appeared Pat Casey had planned. In the 12th, a hit batsmen followed by two singles ended the game, 13-12 Gauchos.

The series finale saw a new face for the Beavers on the mound in freshman Riley Wilkerson. The 6'4" righty pitched well, going 4.2 innings while allowing 2 runs on 4 hits. Despite Wilkerson's good performance, he wouldn't be the Beaver freshman to remember from this game. That honor would go to Michael Conforto. The two runs Wilkerson surrendered in the third would be the only runs in the game until the top half of the 6th. 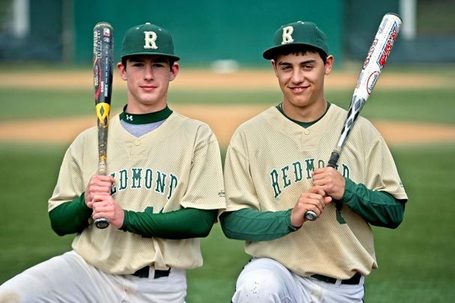 Barnes was once again the beneficiary of a fielding miscue, as his flyball was lost in the sun and wind. Ryan Dettman walked, Keyes bunted them over, and Dunn was hit by a pitch. Danny Hayes worked a full count before walking, and Dylan Davis hit what looked like an inning-ending double play ball, but he legged it out, scoring a run and ultimately being a huge play in the game. Davis was the only Beaver freshmen to start all 4 games, and he didn't dissapoint, going 6-17 (.352) on the weekend.

Conforto outshines Davis too, however, as he belted Gaucho pitcher Jeremy Peterson's delivery an estimated 375 feet down the right field line, giving the Beavers a 5-2 lead.

Matt Boyd was on the mound in the bottom of the 6th, and he surrendered two runs in the inning, one of which was earned. His weekend stats include 5.2 innings, a 1.80 ERA, a win, and one strikeout.

With OSU's lead shrunk down to one, they added insurance in the 8th. After Hayes leadoff the inning with a single, Conforto was there once again, this time hitting an RBI double, giving him 4 RBI's on the game. The wheels started to come off for the Gauchos, as they made another error later in the inning, and also balked in a run. By the time we headed to the bottom of the 8th, the Beavers had scored 3, and were up 8-4.

Cole Brocker was pitching to start the 8th, but after giving up one run and recording one out in the inning, Tony Bryant came on to lock things down. Another Beaver error and unearned run later, Bryant ended the inning, and eventually the game, the score remaining 8-6 Beavers. Bryant's stats after the weekend are as follows: 4.2 innings, 6 strikouts, 2.14 ERA, 1 save, and 0-1 with a K at the plate.