Earlysia Marchbanks, Oregon St.'s lone senior, posted an 18 point, 10 rebound double double, leading the Beavers in both categories, and also had 4 steals and 4 assists, on senior day, but it wasn't enough, as California held off a late rally to complete a weekend sweep of the Willamette Valley, and a season sweep of Oregon St.

After getting trounced 78-45 by Stanford on Thursday night, Oregon St. coach Scott Rueck's message to his team was to "Let it go. There can be no hangover."

The team listened, and the first half was one of the more competitive and enjoyable games of the season. California led most of the first half, but never by more than 7 points, and Oregon St. rallied to tie the game on Marchbank's jumper with just over 6 minutes left before halftime.

California's Layshia Clarendon sparked a 6-0 run to open the second half, and then nailed a 3 pointer to push the Golden Bears ahead 41-35 5 minutes into the second half. Clarendon, below, would go on to post a game high 22 points. 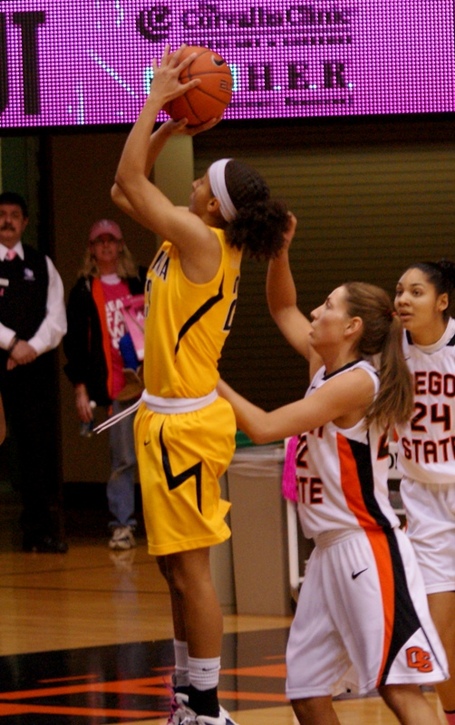 The "Pink Out" crowd of 2,330 saw Oregon St. respond with a 7-0 run of their own, and the Beavers took a 42-41 lead on another Marchbanks basket less than 2 minutes later. But that was their last lead of the day.

Marchbanks answered with back to back baskets, and it sparked an 18-7 Oregon St. rally. Consecutive 3 pointers by Indendi and Ali Gibson had the Beavers back within 5 points with 46 seconds left.

Another 3 pointer by Gibson got Oregon St. within 4 points with 25 seconds left, but the Beavers got no closer. California made 10 of 12 free throws in the last 1:18 of the game, and the Beavers missed their last 3 3 pointers, causing the generally well executed comeback to come up 7 points short. 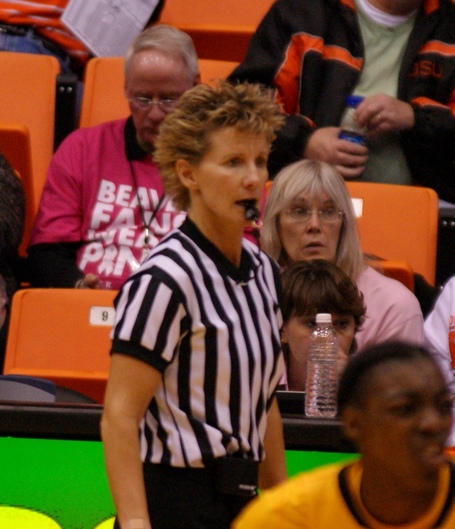 "Since I'm (obviously) having a bad hair day, everyone else is going to have one too."

The disparity in free throws more than made up the difference in the game, and though the margin was enlarged when Oregon St. strategically used a half dozen fouls at the end to extend the game, California already had been to the line 21 times, making 14 of them, while the Beavers only took 6 free throws all afternoon, making 4 of them. 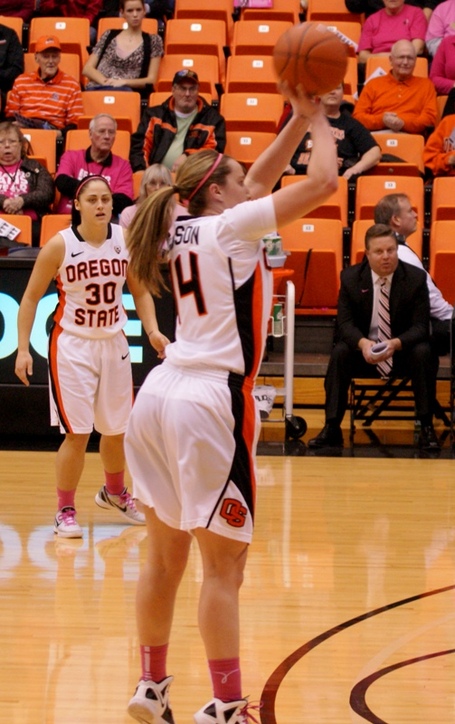 California got double figure performances from 3 players off their bench, with Afure Jemerigby scoring 12 points, and 10 each from both Eliza Pierre and Gennifer Brandon.

Production by Oregon St.'s post players against more physical opposition remained a problem, as Patricia Bright was held to only 4 points, after scoring only 2 against Stanford. Thais Pinto had 7 points off the bench in relief of Bright. California also out-rebounded Oregon St. 42-34, with the difference all coming on the offensive glass.

The Beavers finish the regular season on the road, with a trip to Matt Court to face the Ducks next Saturday next on their agenda. A trip to Utah and Colorado will then wind up the conference campaign. Though Oregon St. is ahead of all 3 remaining opponents, and has already defeated all of them, the fact that the games are on the road will make it difficult to reach the 20 win level before the Pac-12 Tournament. But 20 wins and a post season bid of some kind, which would be a significant boost going forward, and milestone for the program Rueck has rebuilt from scratch in less than 2 years, remain realistic goals for a team unanimously picked prior to the season to finish last in the Pac-12.