Oregon St. women's basketball coach Scott Rueck was concerned something like this might happen after his Beavers almost beat Stanford in the team's first meeting, losing only by 7 points at Maples Pavilion, after leading most of the game, and as late as 3/4 thru the game.

"We made them mad," Rueck noted.

Getting the Cardinal's Hall of Fame coach Tara Van Derveer's attention rarely ends well unless you have a final four quality club, and the rematch at GIll Coliseum was no exception. The biggest game for the Oregon St. women in years was over almost before the crowd of 2,474 even got settled in.

Van Derveer had third ranked Stanford's triangle offense tuned up, and Oregon St. had trouble controlling the baseline generally, and Nnemkadi Ogwumike in particular. N. Ogwumike had 16 of her game high 27 points by halftime.

Meanwhile, the Cardinal's switching defense that kept at least 2 players in the paint at all times, yet still pressured the ball on the perimeter frustrated the Beavers both inside and outside.

The result was a 22 point Stanford lead before Oregon St. ever broke into double digits in scoring, which didn't come until 4:16 before halftime. The Beavers never got the deficit under 20 points the rest of the night, trailing 36-16 at the half, and by as many as 38 points on a couple of occasions, before falling by 33, 78-45. It was the 25th straight win by Stanford over Oregon St., and the Cardinal's 71st. in a row in the Pac-10/12. 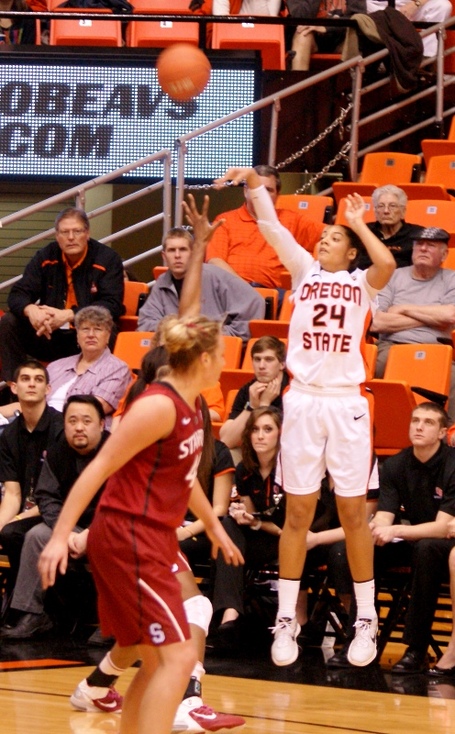 This despite Stanford going into clock-ball mode before even reaching halftime, and Van Derveer calling off the dogs in the last 5 minutes.

Alyssa Martin, left, was the only Oregon St. player to find any kind of offensive consistency, and finished with 11 points, but made only 5 of 16 shots.

Beavers' center Patricia Bright was totally shut down, with only one basket. Ali Gibson, Oregon St.'s leading scorer, was held to 4 points, while Sage Indendi had only 2, and that didn't come until midway in the second half.

The one adjustment Rueck did make that was effective was the insertion of Thais Pinto, though it came too late, 4 1/2 minutes before halftime. The 6'7" Pinto took Stanford somewhat by surprise, and scored a quick 7 points that prevented the Cardinal from extending their lead before the break.

After halftime, the Stanford defense tightened up on Pinto, and she only scored once more, after the Cardinal had emptied the bench. Pinto finished with 9 points, second most for Oregon St.

Stanford buried 3 consecutive 3 pointers, and 5 in 7 possessions, by 3 different players, midway in the second half to turn the game, already out of reach, into a complete blowout.

Chiney Ogwumike finished with 10 points for Stanford, and both Toni Kokenis and Bonnie Samuelson connected on 3 3 pointers. In all, Stanford was 10 of 22 on 3 pointers, while Oregon St. made only 2 of 16.

Overall, Stanford outshot Oregon St. 48% to 33%, after the Beavers made on 24% of their shots in the first half, and the Cardinal shot 52% after halftime, and 60% on 3 pointers, as their ball movement found numerous wide open shooters.

Stanford's Joslyn Tinkle was the game's leading rebounder, with 14, and N. Ogwumike just missed a double double, with 9 boards.

The Beavers host California Saturday at 2 PM, in the annual "Pink Out" game to raise awareness for breast cancer research and treatment.