It's official, per Oregon St. head coach Mike Riley; Cody Vaz will start the Alamo Bowl for the Beavers against Texas.

Vaz, who filled in for Sean Mannion in multiple games after Mannion, the starter in the first 4 games this year, and also the starter at the end of the regular season, suffered a knee injury, won his first two starts ever, at BYU and against Utah, and almost brought the Beavers from behind against Washington.

Vaz played in half or Oregon St.'s games, completing 94 of 157 passes, for 1,286 yards, and 11 touchdowns against only 1 interception, and an efficiency rating of 150.5. Vaz also only fumbled once, though that unforced error at Stanford probably cost the Beavers that game.

While Texas made their decision on a starter early on in bowl preparations, Riley waited until the last day before leaving for San Antonio to settle on a starter, splitting reps close to evenly between his pair of quarterbacks, both of whom have proven they can win. 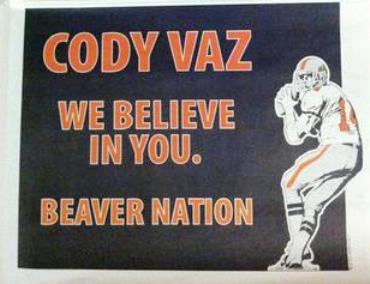 Both quarterbacks played in multiple games this season, and its by no means assured that Mannion won't play as well.