It wasn't pretty again but it was a fairly easy win: Oregon State defeats Howard 69 to 53

It was a faster start as opposed to the last two games, but the Beavs go flat again on both sides of the ball to win another game that should have not been quite as close as it was but still ended up not all that close anyway. A win is a win and Oregon State defeats the Howard Bison 69 to 53.

Share All sharing options for: It wasn't pretty again but it was a fairly easy win: Oregon State defeats Howard 69 to 53

Oregon started out strong taking a 14 to 2 lead with Eric Moreland and Devon Collier scoring the first fourteen points. Moreland scored eight out of the first OSU ten points and had ten total points and nine rebounds at half. Coach Robinson mixed up the starting line up a bit with Collier starting for Joe Burton. Burton came in for Jamal Reid at the 15:11 mark and was able to contribute three important points at the free-throw line to help extend some leads after Howard was able to close the gap at various times to three points (16 to 13 and 20 to 17).

The Oregon State fast start slowed down though and as noted above the Bison were able to close the gap with the Beavs at one point going 1 for 12 after their 5 for 8 start from the field. One important moment was Ahmad Starks hitting a three point basket at the 1:48 mark left in the half for his first field-goal since the Grambling State game on December 8th. The Beavs though were able to stretch out the lead to 33 to 23 at the half in which Howard shot 32% from the field (even with some lackluster OSU defense) and OSU shot 42%.

The start of the second half did not bode well as Devon Collier went the floor and took a little time to get up with what looked like a possible knee type of injury. But Jamal Reid answered a Howard hoop with a spectacular tip-in three point play. The really good news was seeing Collier return to the bench from the locker room looking ready to get back into the game, which he did at the 16:19 mark. Another positive note was seeing Freshman Reid step it up with some aggressive play and scoring after Collier went out of the game to help the Beavs slowly extend the lead to fourteen points.

Still though the Beavs just seemed to posed make a bigger move to then give up inside hoops and easy fast break drives, all to another team that should have been out matched by the Oregon State players across the line-up and rotations. Also seeing Burton throw a ball off the side of the backboard for the Beavs 11th turnover one just wonders about the mental focus of this OSU team against the recent level of opponents during the holiday break. As noted during the TV broadcast Oregon State's non-conference games rank at 315 out of 347 for strength of schedule (which ironically was shown at the time I was writing about this possible lack of focus against weaker opponents).

A bit indicative of the play of late Langston Morris-Walker does come in to hit an important (and a rare) three-point shot to open up a fifteen point lead to then see Howard score on an easy basket after a breakdown in the defense, but then to have Starks hit another three to put the lead to sixteen at the 9:27 mark in the second half. The Beavs though pull away enough to get more of the younger guys into the game (even seeing a Daniel Jones basket off a C.J. Mitchell assist), but in the end it was not a pretty game for either team. 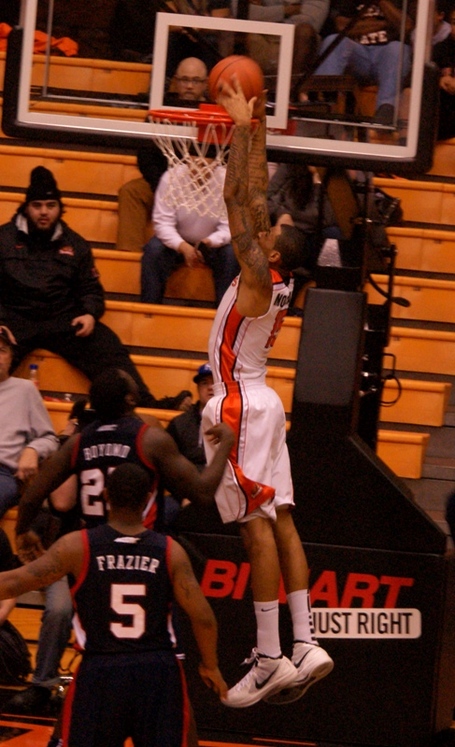 Eric Moreland posted a double double, with a game high 10 rebounds to go with his 14 points. (Photo by Andy Wooldridge)

Oregon State ended at 44% from the field (hitting 5 of 11 three pointers) and out rebounded the Bison by 32 to 26, and Howard ended at 39% from the field. Eric Moreland and Roberto Nelson lead the Beavs with 14 points each followed by Devon Collier's 12 points. Jamal Reid contributed a season high 7 points with Joe Burton adding in 8 points, and Ahmad Starks had 9 points off of 3 for 4 three pointers.

Overall there were some highlights such as Moreland strong opening play and Reid's aggressive play on both sides of the ball in the second half. Reid has his best game to date as a Beaver, and played a large part defensively in Oregon St. shutting out Howard's Calvin Thompson, the Bison's leading scorer.

Additionally it was nice to see Starks break out of his slump of late even if he didn't quite light it up like we have come to expect, but right now the Beavs have a little luxury to get him back into the flow of things before it will be important to have his outside touch against tougher competition.

A crowd of 3,879 turned out on Wells Fargo Toy Drive night, where a new toy for a child and $1 was all you needed to get in.

The Beavs return to the court in Las Vegas against the 6 and 6 San Diego Toreros this Saturday evening at 6:00pm. The game will be again broadcasted on the Pac-12 Networks.