Overall record (9-3 vs. 8-4) and BCS ranking (#13 vs. #23) suggest Oregon St. should beat Texas in the Valero Alamo Bowl, even given that its a true road game for the Beavers, with the Longhorns being only 80 miles from home, despite being the "official" road team. Average point differential (+13.2 vs. +6.7) supports that theory too.

But overall records and season-long rankings are just that; season-long, overall indicators of how teams have done, and are likely to do, against competition overall. They are not necessarily good indicators of how a particular matchup might turn out. So to get a better feel of how Oregon St. will match up with Texas, some deeper digging is necessary.

In assessing the Texas defense, most of the opposing offenses that gave the Longhorns the most trouble, in losses to West Virginia, TCU, and Kansas St., and even their win over Baylor, a game in which Texas gave up 50 points, mobile quarterbacks were a major factor. Clearly not relevant to what Oregon St. will confront them with, especially if Sean Mannion gets the start.

However, there are things to be gleaned from the outcome of the Red River Rivalry, where Oklahoma routed Texas 63-21. The Sooners have a traditional quarterback in Landry Jones, who will usually be found throwing from the pocket. Additionally, while Jones put the ball in the air 37 times against Texas, throwing for 321 yards and a pair of touchdowns, Oklahoma ran the ball, and ran it a lot, and effectively. And while Damien Williams did more damage than anyone, piling up 167 yards on 22 carries, 95 of those and his only touchdown came on 1 play, and 4 others had multiple carries.

Sound like a game plan Oregon St. head coach Mike Riley might be more than likely to try?

It's unlikely the Oregon St. offense can amass 353 rushing yards on 50 carries like Oklahoma (who is ranked 11th in the BCS, very close to the Beavers) did against Texas (excluding one 10 yard loss Jones suffered), but you can bet Riley will work to establish the run, and he won't hesitate to utilize more than one from his stable of backs, and include some fly sweep action at some point as well.

And when the Beavers are able to run to any marginal degree, it forces opponents to commit someone from the linebacking and safety groups to run support. Which means space for Markus Wheaton and Brandin Cooks to run.

Those well-balanced offensive numbers Oklahoma put up against Texas also came from an offense that normally got more than 2/3 of their yards through the air. Sounds a lot like Oregon St., doesn't it.

Texas has the 39th best pass defense in the country, having surrendered only 213.5 yards per game, and that in the somewhat pass-happy Big XII. But the Longhorns have never seen the likes of Oregon St.'s pair of 1,000 yard plus receivers, and not many with the speed to daylight both Wheaton and Cooks bring.

It's also worth noting than opponents didn't necessarily focus on throwing on Texas when running the ball can be so productive. The huge numbers the Sooners rolled up weren't an aberration; the Longhorn defense allowed just inches shy of 200 yards per game, 101st in the country.

So Texas' defense is a prime candidate for a dose of play-action, which just happens to be what Mannion is best at.

What about the defense, though?

Still somewhat comparable, and as such, relevant, at least if the Beavers can similarly get ahead of Texas early, and make the Longhorns somewhat one dimensional, even if they can't get sacks, something Oklahoma wasn't particularly able to get against Texas, though their defense posted only 2 fewer for the season than Oregon St., 24 vs 26.

Oregon St. hasn't tended to blow opponents out, however, at least exclusive of California and Nicholls St. A better indication might be found in TCU's 20-13 win over the Longhorns, and that came in Austin, where Texas had a pronounced home-field advantage.

While the TCU 4-2 5 base defense isn't exactly what Oregon St. runs, the greatly increased use of the nickel that the Beavers have made this season, even against the run, does make how the Horned Frogs did informative.

The TCU defense was almost exactly as effective as Oregon St.'s against the pass, less than 5 yards per game different, and the Horned Frogs were just more than 20 yards per game better against the run, and therefore overall than the Beavers. However, Oregon St. was a better scoring defense, and that's with a game against Oregon inflating their number. Still, just under 20 points per game and TCU's just over 23 points per game put both defense in the same area code.

So how did a similar scheme that was similarly effective overall do against Texas? TCU held Texas to 86 rushing yards, on 33 carries, and limited a Longhorn offense that used both David Ash and Case McCoy at length (another similarity to Oregon St.'s duo of Mannion and Cody Vaz, which the Beaver defense is in turn used to dealing with in practice) to a combined 214 yards on 21 completions, out of 38 attempts, only 55%.

More importantly, the Horned Frogs allowed no touchdowns through the air, and intercepted 3 passes, 2 by Ash (which contributed to his being benched), and 1 by McCoy. 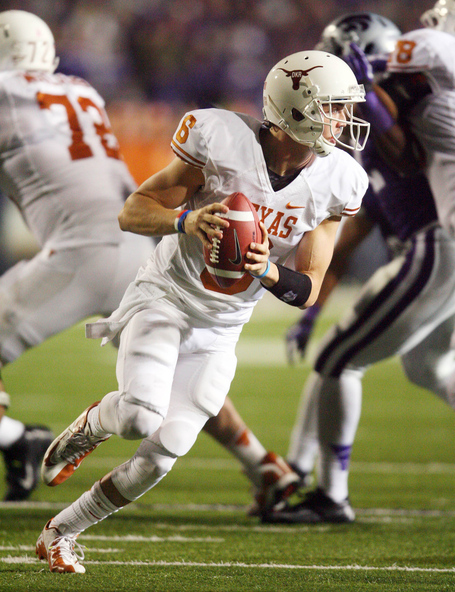 Case McCoy took over for David Ash at quarterback for Texas on several occasions this season, and started against Kansas St., the last game of the regular season. Texas coach Mack Brown and new offensive coordinator Major Applewhite haven't decided on which one to start against Oregon St., and the Beavers could well see both. (Photo by Scott Sewell, US Presswire)

And TCU doesn't have the likes of All-American cornerback Jordan Poyer in their secondary. Ash threw 7 interceptions this year, and 15 in the last 2 seasons, while McCoy threw 3, and 7 over the last 2 years. The complex, NFL grade defense that Oregon St. secondary coach Rod Perry will throw at Texas, especially with Poyer, who has 7 interceptions alone, lining up in multiple places, stands a good chance of picking up a pick or two.

It's certainly easy to slip on the orange-tinted glasses when assessing Oregon St.'s chances in the Alamo Bowl, but based on outcomes against teams that are comparable, both in terms of scheme and effectiveness, it appears to be reasonable to expect a favorable outcome in San Antonio for the Beavers.