Share All sharing options for: Oregon St. Runs Past USC

Oregon St. and Jared Cunningham did former Beaver great Gary Payton proud Saturday night, running past USC for a 78-59 win. Payton, who played for Oregon St. from 1986 thru 1990, was making his first return visit to Gill Coliseum in years, and he saw Cunningham, who hails from the same east bay area Payton is from, deliver a game high 18 points, a game high 5 assists, a pair of steals, and of course a couple of patented Cunningham highlight video dunks.

Cunningham's first steal moved him to 4th place all time in Oregon St. history, and he now has 186 in his 2 and 2/3 seasons. Payton, by comparison, snagged 321 steals in 4 years. So Jared still has some work to do.

A 13-0 Oregon St. run opened an early 18-8 Beaver lead, and forced USC coach Kevin O'Neil to burn a pair of timeouts less than 7 minutes into the game. The Beavers didn't relent, and a blocked shot by Devon Collier led to a 3 on 1 break, where Roberto Nelson hit Cunningham, who fed Collier for a dunk that made it 27-14, and forced O'Neil into another time out with 6:25 still to go in the first half.

The Trojans had missed all 6 of the 3 pointers they had attempted before the back to back ones right before the break. USC shot only 36% from the field against the Beavers' defense in the first half, and Oregon St.'s 8 first half steals caused most of USC's 12 first half turnovers.

The Beavers' ball handling was humming as well, with 12 assists on their 16 made baskets in the first half. Cunningham had 12 of his points before the break, on 5 of 7 shooting, including a pair of 3 pointers, and all of his assists came early, when they really mattered to Oregon St.'s taking control of the game.

Joe Burton and Challe Barton added 5 points each off the bench for Oregon St. in the early going, while USC's Byron Wesley kept the Trojans at least within sight of the Beavers, with 8 points. 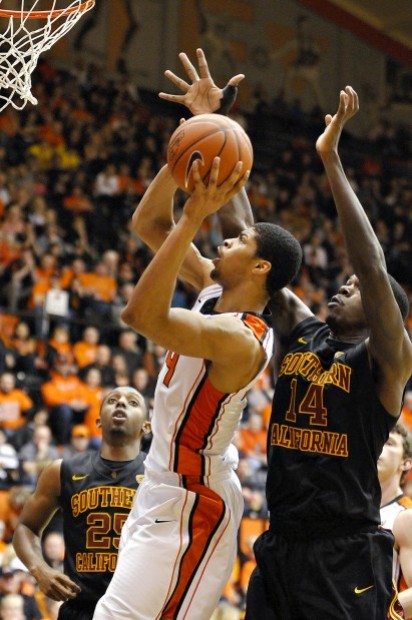 Collier's layin, above (Gazette-Times photo) capped a 6-2 spurt coming out of the locker room that reopened the lead to 18 points, putting Oregon St. up 42-24, and forcing O'Neil into yet another time out only 2:40 into the second half.

Oregon St.'s ability to force the pace, and force opponents into timeouts, was a factor in the Beavers' win on Thursday. UCLA rallied, but ultimately lost by 3 points, with their options curtailed by running out of timeouts.

It didn't help USC though, as the Trojans never got closer than 13 points the rest of the way.

Ahmad Starks adjusted for a leaping defender to step into a 2 point basket, and when Cunningham's free throw completed a 3 point play 30 seconds later, Oregon St. had opened a 21 point, 47-26 lead, as large as any of the game.

USC rallied briefly with a 7-0 run, but Starks answered with an apparent 3 pointer that was only credited for 2 points, and then Cunningham's steal and dunk reopened the lead to 18 points, as the Beavers went up 51-33. With 13:23 still to go, Oregon St. had 21 points off 16 of the 18 turnovers USC would eventually suffer.

The key to the game for the Beavers was to score, and score a lot, and out-distance the Trojans, who average only 54 points per game. Burton's basket with 11:34 to go matched USC's average point production per game, and Angus Brandt's 3 pointer made it 57-39, equaling the Trojans' season average of points allowed with 11 minutes to go.

Starks' 3 pointer with just under 5 minutes left made it 66-47 Oregon St., which equaled the most points USC had given up in any game all year, and prompted O'Neil into one last time out to try to stem the tide.

But the Beavers were easily in position to trade points, and wound up rolling up a dozen more points than the Trojans had allowed in any game this season.

"It was a great, great weekend," Oregon St. coach Craig Robinson said. "It started out with the win over UCLA, which was, given all the circumstances, the most important single win we have had since I have been here. And then to get this sweep of the LA schools, with Gary here, after all that our fans went through this week with the flooding in the area, was really special."

It was the first sweep of a series at Gill of the Los Angeles schools for Oregon St. since 2005, when Lamar Hurd, who called the game for ROOT Sports Northwest, was playing for the Beavers. It was also Oregon St.'s largest margin of victory over USC in 24 years. 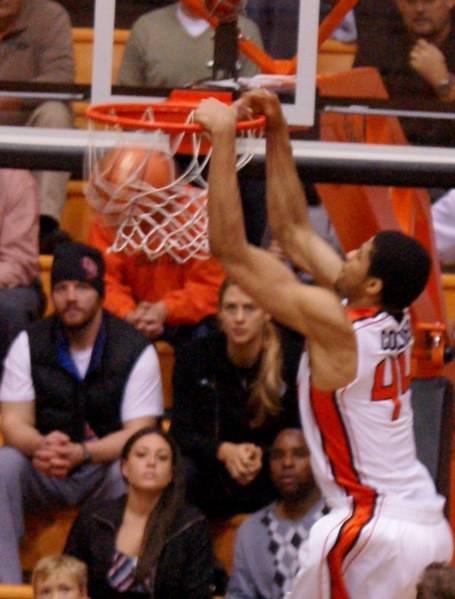 Collier, who had 20 points against UCLA, added 12 more against USC, including a couple of dunks, after celebrating his birthday in between the games. Burton finished with 11 points, and just missed a double double, with 9 rebounds. Eric Moreland led everyone with 11 rebounds, and also had 3 steals, 2 assists, and a pair of blocked shots, as well as a couple that were ruled goaltending, but which had a shot-altering affect on USC. Starks also reached double figures, with 10 points.

Wesley, who led USC with 16 points, was the only Trojan that shot well, hitting 7 of 10 shots. Maurice Jones added 13, but connected on only 5 of 14 shots, and missed all 4 of his 3 pointers. Jackson was the only other Trojan in double figures, with 12 points.

Seven foot USC center Dewayne Dedmon, in only his second year of playing basketball, had 8 points, including a couple of dunks and a blocked shot that showed everyone the tremendous potential he has.

"We'll be watching him play in the NBA soon enough," Robinson said.

Dedmon was raised in a very sheltered manor in a Jehovah's Witness family, and had never even heard of the Pac-12 Conference until he arrived at junior college.

It was Oregon St.'s best defensive effort in some time, though there were still some instances of losing open shooters. USC shot 50% for the game, but their percentage only climbed that high late in the game, after the Beavers let up defensively, interested more in running out the clock.

The Beavers played more zone, and mostly the 1-3-1, than they did man defense against the Trojans, and by at least a 2 to 1 ratio.

"Our base defense is man to man, and we have been playing predominantly man to man the entire season," Robinson said. "The reason why we stayed with the 1-3-1 was because we got like six steals in a row, and built a good lead, so we just kept doing it."

As it was against UCLA, free throw shooting was critical to Oregon St.'s success against USC. The Beavers didn't shoot well at the line this time, making only 12 of 21 shots, 57%, but got to the line 17 times in the second half, while the Trojans only took 10 free throws the entire game, making 6.

It's a stat that Oregon St. (13-7, 3-5) will need to improve on next Sunday afternoon, when the Beavers next take the court, against Oregon (15-5, 6-2). The Ducks, who are tied for the Pac-12 lead, made 28 of 32 free throws in beating UCLA 75-68 this afternoon. The Ducks win completed a weekend sweep of the LA schools by the Oregon schools in the only regular season games between them this season.

USC (5-15, 0-7) remains in last place in the conference. Oregon St. is in 9th. place in the Pac-12, but trails Oregon and co-leader California by only 3 games with 10 to play. And the Beavers have the tie-breaker over the Bears, who lost 77-75 at Washington St. this afternoon. 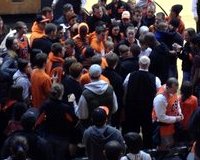 Many of the crowd of 7,537 lingered to celebrate the win with Payton, who clearly enjoyed his return.

"It was great to see Gary come back," Cunningham said. "He was one of the best players to ever come through here at Oregon State. It was good talking to him earlier before the game and hearing what he had to say. He has a lot of confidence in the team so it was great seeing him on the side of the court cheering for us."

Payton's return, at Robinson's invitation, was possibly as big for the program as was the win.

"Most of you know that when I first got here, I thought that it was important to reconnect with all of the former players from the past, and Gary was one of those," Robinson said. "I reached out to him, and after about a season he called back and we have kind of stayed in touch via phone and texting. Then when he got inducted into the Oregon Hall of Fame two years ago, he came out to our open gym, and he met the guys. You could tell he was really following what we were doing, and I had always invited him to come to the games. He lives in Los Angeles or Las Vegas depending on what he was doing, so he would come to the games when we were in Los Angeles or at the Pac-10 tournament."

"We would say 'Gary you got to come to a game in Gill, people would love it,' and it had been a long time. So that was really what really precipitated it, and what got him here. Just because you guys are seeing him for the first time doesn't mean that he hasn't been following what we are doing. He has really been paying attention, and you'd be surprised how many texts I get from him saying 'hang in there' or 'nice game.'"

"He stays in touch with Jared and his family, so it was really exciting to have him here. He came to the shoot-around and it was just fantastic, and I am sure he got mobbed by the fans."

"But to be completely honest, other than Jared, I think that the staff was more excited about it because we know him as a player. I am kind of saying that tongue and cheek because the players know who Gary Payton is, but a lot of them weren't born when he was playing. I mean these kids were born in the 1990s, and he just started playing in the league (the NBA) in 1990-1991. It was exciting enough for them, and it was great having a Hall of Famer give them a little pep talk and to share with them how confident he was in them, but I think the staff had a lot more fun with it. I know that I did."

Payton recognized the importance to the future of the program of the involvement of the former players like him.

"It's important for recruiting. These kids, they like to see the "stars" come by. Hopefully, this can help get some more players to come here," Payton added.

Despite floods, cold bugs, and campus closures, it was a great week to be a Beaver. Cue the Fight Song!