Oregon St.'s ball handling and free throw shooting allowed the Beavers to break a 13 game losing streak against UCLA, and hand the Bruins a 3 point loss in front of just over 6,000 fans at Gill Coliseum Thursday night.

Oregon St. also broke a recent habit of starting slow, jumping out to an 8-0 lead. However, UCLA answered with a 10-1 run, and the battle was on. The Beavers never trailed by more than 3 points, but despite taking an 11 point lead 3 different times midway in the second half, it wasn't until Oregon St. made consecutive stops with under 3 minutes left, the centerpiece of a defensive effort that caused the Bruins to suffer a 3 minute, 35 second scoring drought, that the Beavers finally took control of what had been a close, classic Pac-12 game.

Oregon St. fans suffered a scare 7 minutes into the game, when the Beavers' Jared Cunningham and Roberto Nelson collided chasing a loose ball, and Cunningham went to the floor, and had to sit for over 2 minutes before returning to the fray. It might have contributed to a slow start for Cunningham, who had only 5 points at the half. But after the break, Cunningham, the Pac-12's leading scorer, came alive. His 16 second half points pushed him past Devon Collier for the honor of being the game's leading scorer, in a contest that saw 5 players for each team reach double digits.

Collier, who carried Oregon St. offensively for much of the game, especially in the first half, finished with 20 points.

The Beavers opened a 5 point, 26-21 lead on an Angus Brandt basket with a second more than 8 minutes left, prompting Bruins coach Ben Howland to use his second time out of the game, despite having a media timeout looming with the next dead ball. It would prove pivotal later, and also a harbinger of things to come.

Lazeric Jones, who finished as the Bruins' leading scorer, with 17 points, hit a 3 pointer, and UCLA pulled back into a 28-28 tie in less than 2 minutes, but the pattern of burning time outs would come back to haunt Howland's troops later.

Brandt's 3 pointer pushed Oregon St. ahead 39-38 at the break, but the game remained a back and forth affair, with 3 more lead changes, and a pair of ties in the first 3 minutes of the second half. Eric Moreland's jumper tied the game at 44-44, only to see Jones jack up another successful 3 pointer. But after the Beavers took a 48-47 lead on back to back baskets by Brandt and Ahmad Starks, Howland took another time out, with the clock under the 16 minute mark, and another media timeout looming.

UCLA couldn't get the ball inbounded against Oregon St. pressure, and had to use their 4th. timeout to avoid a turnover. That turned out to be expensive and ineffective, when Josh Smith turned the ball over after the Bruins finally got the ball inbounded.

UCLA's Tyler Lamb was shut out until the 14:50 point of the second half, when he finally got a couple of free throws down, and eventually finished with only 8 points, a key accomplishment by the Oregon St. defense.

Smith's layup tied the game for the 7th and last time, 51-51 with 14:14 remaining, but Cunningham responded by burying a 3 pointer to put Oregon St. ahead for good.

Cunningham's steal, one of his game high 4, and subsequent dunk extended the lead to 62-54 with 11:39 left, prompting Howland into using the Bruins' last time out, once again with a media timeout due as soon as a deadball occurred.

The Beavers built the lead to 11 points for the first time on a pair of Cunningham free throws with 10 minutes left, and again on a pair of free throws by Nelson less than a minute later. Collier's layup with 8:38 left opened the third and final 11 point lead of the game, putting the Beavers up 70-59, and allowing them to trade points for minutes.

And while Howland was out of time management options, Oregon St. coach Craig Robinson made good use of one going down the stretch. Inattentive officiating overlooked a couple of muggings by UCLA players, and the Bruins had cut the deficit to 8 points, when Robinson decided it was time to take the time to settle things down.

Robinson has come in for considerable criticism for questionable clock management in the games the Beavers lost in overtime, but also deserves the credit for superior time and game management in this instance.

"We needed this win badly," Collier added. "We were on a losing streak so we needed to get a win. This one was good for us."

Oregon St.'s last points from the field came on Starks' 3 pointer with 4 and a half minutes left. 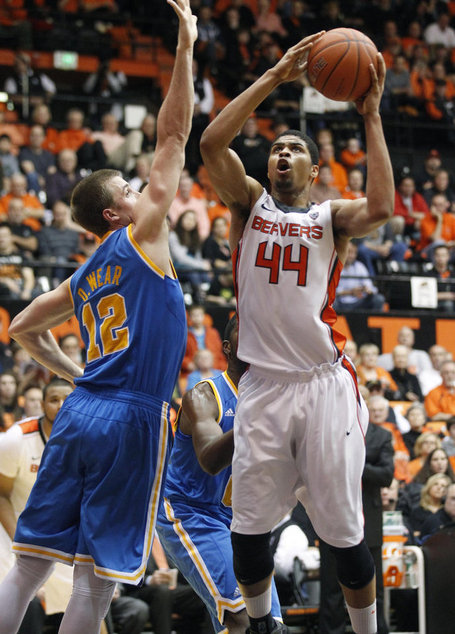 Oregon St.'s Devon Collier, playing with his dad in attendance, scores 2 of his 20

points against UCLA's David Wear, who had 16 himself in the contest.

The Wear twins, Travis and David, both finished with 16 points for UCLA, but David Wear had 10 points in the first half, and both had a basket in the final half minute, inconsequential to the final outcome. Oregon St.'s ability to slow down the twins for significant stretches of the second half was another key to the win.

Jerime Anderson added 11 points for UCLA, and Smith came off the bench for 10 points.

Both Starks and Brandt booked 13 points for the Beavers. Brandt shot 67% from the field, making 6 of 9 shots. Nelson rounded out Oregon St.'s double figure figures, with 10 points. Joe Burton came off the bench to add 6 points, but also had a pair of assists, a pair of steals, and 4 rebounds.

Both teams shot well and consistently, with UCLA hitting 58% from the field in both halves, and Oregon St. connecting on 58% of their shots as well, after a 59% first half.

As predicted in the game preview, the turnover battle would be key, as Oregon St., the conference leader in takeaways, met UCLA, the best team in the Pac-12 at taking care of the ball. As it turns out, the teams did meet in the middle, with the Bruins suffering 13 turnovers, and the Beavers 12. But the difference was what happened as a result of those turnovers. Oregon St. got 20 points off turnovers, while UCLA got only 5.

The Ducks downed the Trojans 65-62 tonight, as Garrett Sim and Devoe Joseph combined to hit 6 of 6 free throws in the final 1:40 to pull out the win.