For the second year in a row, UCLA beat Oregon St. up in the trenches, and Bruin quarterback Richard Brehaut did just enough, and nothing to lose the game, putting his team in position to benefit from others mistakes, and deal the Beavers a season damaging blow.

Brehaut only threw 11 passes, but completed 7 of them, including a pair on a 3 play drive that quickly erased any early momentum the Beavers might have had after a 17 play, 82 yard first drive, as well as the only lead Oregon St. has had in regulation this season. Brehaut also ran for a touchdown.

Sean Mannion, making his first start for Oregon St., completed 24 of 40 passes, for 287 yards, and the 45 yard touchdown to Jordan Bishop that capped a run of 16 straight points, and pulled the Beavers within 2 points of tieing the game at the end of the third quarter. But Mannion also threw an interception early in the second quarter that not only took the Beavers out of scoring position, but also set up the Bruins with a short field that produced a 14-3 lead. 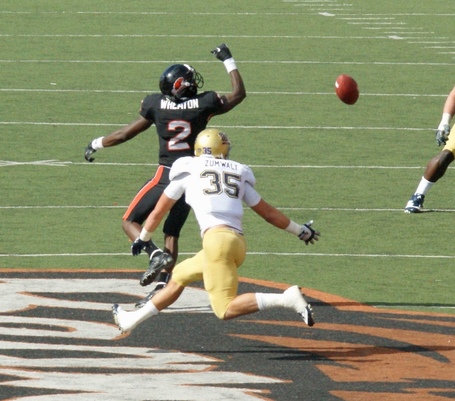 Mannion also threw behind receivers on crossing routes on several occasions, including Marcus Wheaton, above, and also missed receivers with errant throws multiple times. Such was to be expected from a first time starter. Mannion also lost control of the ball on a pass that neither the Pac-12 officials on the field nor the replay crew were able to accurately rule correctly, which led directly to UCLA's third touchdown of the first half.

The officials' incompetence was one of several key developments that cost Oregon St. the win, but it wouldn't have happened had Mannion not mis-handled the ball. And like in last year's 17-14 loss in Los Angeles, while an officials' mistake can be directly linked to Oregon St. losing a game they were in position to win, there were plenty of other mistakes that put the Beavers in that position as well.

Meanwhile, UCLA played turnover free ball, and dominated the line of scrimmage on both sides of the ball. Despite losing starting running back Johnathan Franklin to an apparently twisted ankle in the second quarter, after he had picked up only 36 yards, the Bruins still rolled up 211 yards rushing, as Derrick Coleman, below, came off the bench for a 100 yard rushing afternoon.

In contrast, Oregon St. could not get an effective running game going against a UCLA defense that hadn't stopped anyone on the ground previously. The Beavers managed only 88 yards rushing on 29 carries, which included only one sack of Mannion.

Jovan Stevenson had 47 of the yards, on just 7 carries, to lead Oregon St. Freshman Terron Ward got only 26 yards, and it took him 13 carries to do so. Why Stevenson, who was much more effective, got far fewer touches was unclear. 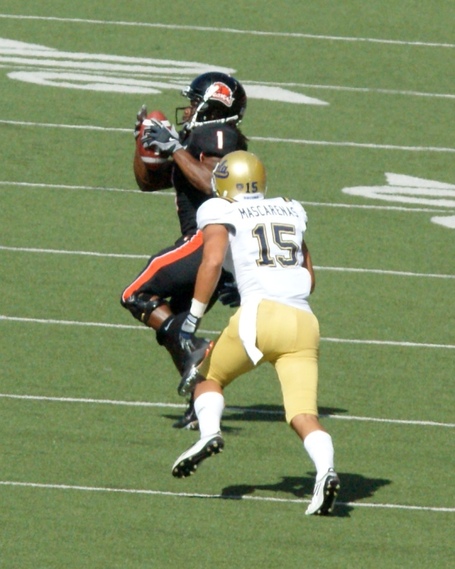 "The Calvary", as Oregon St. head coach had referred to WR James Rodgers, above, and TE Joe Halahuni as, both returned from rehabbing off-season surgeries, and both made an impact. Rodgers got a rousing reception from the crowd, and had 5 catches for 76 yards. Halahuni, below, had 5 catches for 26 yards. 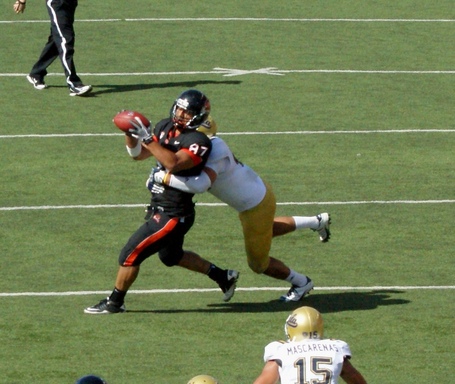 Rodgers also saved the first drive, and 3 points for the Beavers, when he dove under the pile to pull out the ball after a Ward fumble on the lengthy first drive, and delivered several solid blocks.

Wheaton led Oregon St. with 7 catches for 83 yards, plus 4 fly sweeps for an additional 31 yards. 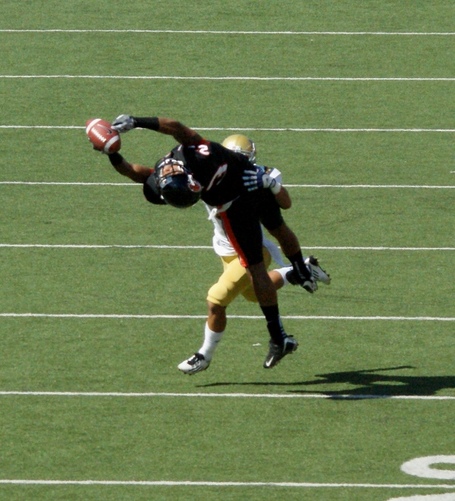 Bishop had 3 catches for 69 yards, and almost managed another Sportscenter grade grab, above, that bounced free when he hit the ground. 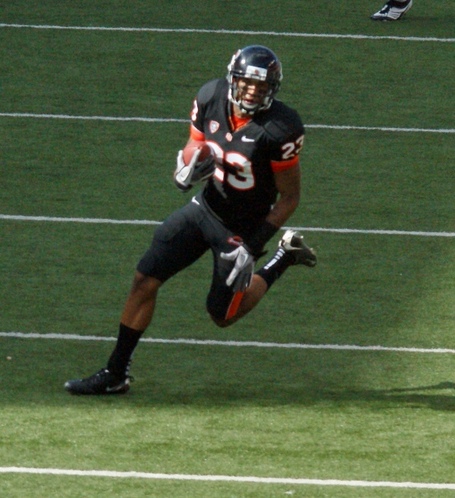 But his scoring catch and run, above, the first (and so far only) passing touchdown of the season for the Beavers, was spectacular as well, including diving the last 4/5 yards. 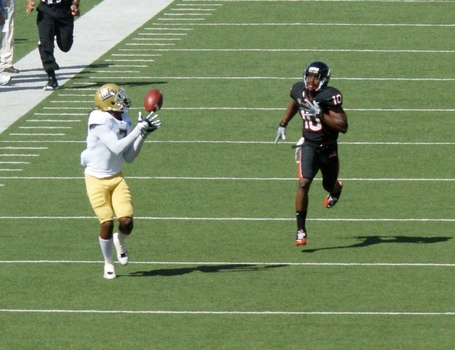 Josh Smith led UCLA in receiving, with 76 yards, including a 62 yard catch, above, that set up the Bruins' first score. 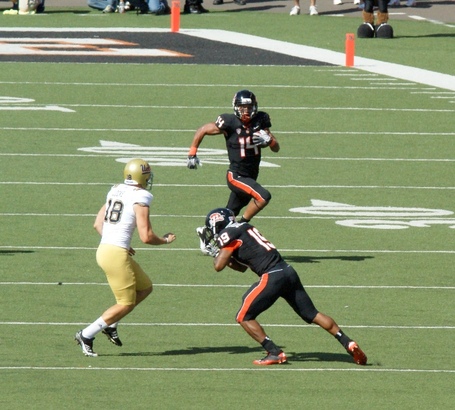 Special teams was a mixed bag for the Beavers. Jordan Poyer capped the second quarter with an 85 yard punt return for a touchdown seconds before the break. It was the second longest punt return in Oregon St. history, trailing only Dwayne Owens' 97 yarder, which also was at the Bruins' expense, in 1992. Interestingly, UCLA survived that long score as well, winning that contest 26-14.

Poyer produced 156 return yards on 5 opportunities, and Oregon St.'s Andrew Seumalo, 49 below, also blocked both a field goal and an extra point, by UCLA's do everything kicker Jeff Locke, who is normally just the punter, but is filling in for the injured Kip Smith. 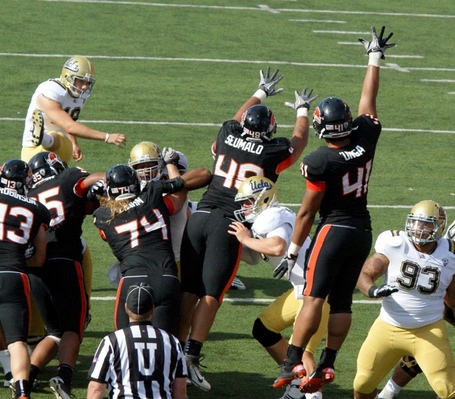 But freshman Trevor Romaine, who other wise kicked well, making both of his field goal attempts, had one kickoff go out of bounds 2 yards short of the pylon, costing Oregon St. 20 yards of field position. And on the kickoff that followed Bishop's score that made it a two point game, Romaine had to make the tackle after Josh Smith's 42 yard return. And, by the way, it remained a 2 point game, after an illegal procedure penalty on the two point conversion attempt forced it into an 8 yard play, which ended in an interception.

Also, though punter Johnny Hekker had a 53 yard punt, he also sent one 62 yards, and into the end zone before Poyer could down it, costing nearly 20 yards of field position as well.

"Trevor just can't kick the ball out of bounds," Riley said. "And I told Johnny ‘Your too good of a punter to be kicking the ball into the end zone in situations like that.'"

44,352 fans turned out on a sunny and warm Saturday that saw temperatures in the low 80s, the 13th. largest crowd in Reser Stadium history, and most of them booed the play calling on a couple of occasions, when third and fourth down situations saw plays run that didn't have any opportunity to pick up a first down.

Problems on earlier downs were at least as large a factor in Oregon St. failing on 10 of 18 3rd and 4th down plays, though. Coupled with the turnovers, the failure to convert first downs became too much for Oregon St. to overcome.

"There were a lot of good things to build on," Riley summarized, "But the turnovers were the difference in the game. We just can't have them."

Turnovers, and the mismatch in the trenches. The size and caliber of recruits a few seasons ago simply isn't sufficient to compete against many opponents Oregon St. is encountering, and its wasting the effort being made, and negating most other aspects of the game.

Poyer's punt return sparked the Beavers' third quarter rally, but while the effort wasn't lacking, the results were. Oregon St. has now lost 5 games in a row, for the first time in 14 years, since the end of Riley's first year in his first stint as head coach. The Beavers have also lost 7 of their last 8, and their first three games of a season, neither of which has happened since the end of the Jerry Pettibone debacle.