Beavers Break Through At ‘Cats Expense

Share All sharing options for: Beavers Break Through At ‘Cats Expense

Oregon St. used an explosive second quarter, in which they scored 5 times, to build a 3 touchdown lead, and held off an Arizona rally for a 37-27 win that ended the Beavers' 6 game losing streak.

This year's Oregon St. team is the youngest to ever take the field, but it was actions of several of the Beavers' seniors that sent the Wildcats to their 10th consecutive loss to FBS foes dating to last season.

TE Joe "The Tank" Halahuni had a pair of touchdown catches, including the game-icing 2 yarder with 5:22 left. In addition to his pass defense and tackling chores, safety Lance Mitchell had a fumble recovery, an interception, and even caught a pass on a fake field goal play to keep what would become a scoring drive alive. The pass came from punter Johnny Hekker. 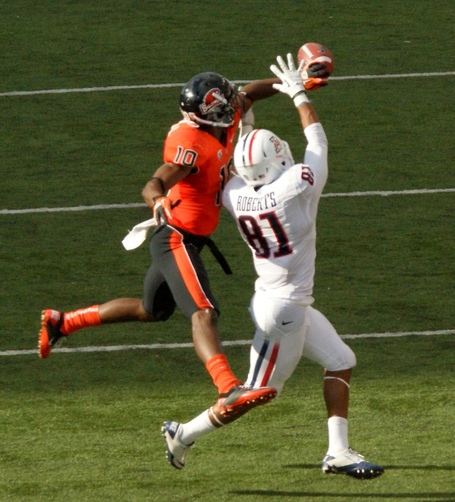 Lance Mitchell (10), breaks up a pass intended for David Roberts (81).

Initially, it looked like it would be Arizona that would jump ahead, when Oregon St.'s freshman quarterback Sean Mannion, in only his third start, overthrew Halahuni on the third play of the game, and Arizona's Shaquille Richardson intercepted the errant pass, setting the ‘Cats up on the Beavers' 28 yard line.

But the Oregon St. defense dug in, and persisting problems with their kicking game prompted Arizona head coach Mike Stoops to eschew the field goal on fourth and three at the 21. ‘Cats quarterback Nick Foles couldn't hook up with Juron Criner, and the Beavers had held.

Surprisingly, the first quarter ended in a scoreless tie.

But it was just a matter of time. Oregon St. was in the midst of what would eventually be a 17 play, 92 yard drive that kept the ball out of Foles' paws for 8 minutes and 48 seconds. Jovan Stevenson, who would go on to be the game's leading rusher, with 99 yards on 17 carries, capped the drive with a pair of runs for the last 9 yards. 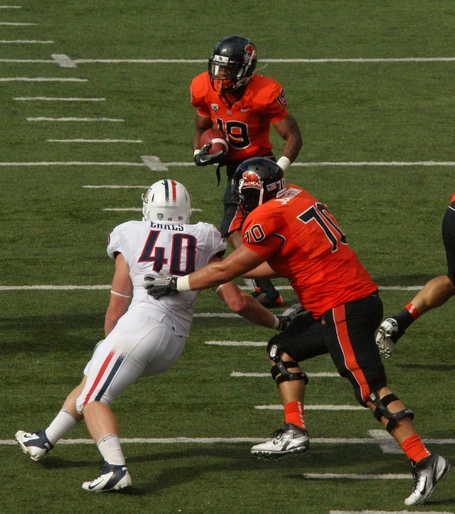 Jovan Stevenson (19) led all rushers, with 99 yards, but missed the 4th. quarter,

Oregon St. forced Arizona into a three and punt possession, and then Clayton York doubled the Oregon St. advantage to 14-0, blocking Kyle Dugandzic's punt, recovering it, and returning it for the touchdown.

Foles found Dan Buckner, who was the game's leading receiver, with 8 catches for 144 yards, for his only touchdown of the afternoon, which cut the Oregon St. lead to 14-6. But Alex Zendejas missed the conversion, the fourth time already this season he has done that.

Oregon St.'s response drive appeared to stall, at the Arizona 49, when Mannion completed a 13 yard pass to Halahuni on 3rd and 16, as the problem from previous weeks of running plays on third down that fail even if they succeed, due to not being deep enough, persisted. 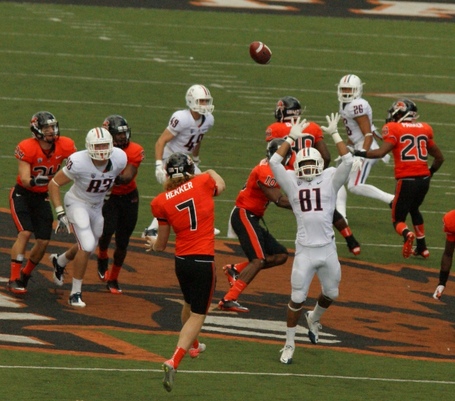 But Hekkar, who was a high school quarterback, found Mitchell, a gunner on punt coverage, for a 13 yard gain, above, and a first down. It would lead to the first of his 3 field goals on the day, and a 17-3 Beaver lead.

After a controversial pass interference penalty, one that Oregon St. head coach Mike Riley described later as a "terrible call", the Beaver defense made it a moot point. Red shirt freshman DE Scott Crichton got a hand on Foles' arm as he threw, and Michael Doctor, below, pulled down the first of two interceptions Foles, who didn't throw any Arizona's first 4 games of the season, served up Saturday afternoon. 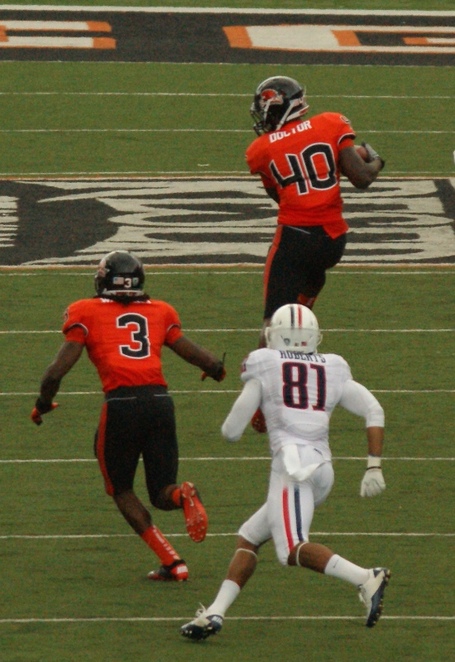 Mannion had completions for 16 yards to Stevenson, and 15 to Marcus Wheaton, and then, after the Beavers had to burn two timeouts in the same stoppage of play, with 16 seconds left before halftime, found Halahuni for the touchdown that put Oregon St. up 24-6.

But the Beavers' special teams weren't ready to call it a half. The ‘Cats' Jack Baucus fumbled Romaine's squib kick, and freshman DE Dylan Wynn covered the loose ball.

Mannion's 13 yard completion to Jordan Jenkins, his 19th out of 24 first half throws, set up Romaine for the 40 yard field goal that made it a 21 point, 27-6 halftime lad for the Beavers.

Mitchell ended Arizona's first two drives of the third quarter, covering Daniel Jenkins' fumbled exchange from Foles, and then on the first play of the ‘Cats' next drive, picking off Foles' deep pass down the right hash seam.

Mannion completed passes to Jordan Bishop for 23 yards and James Rodgers for 21, and got a 17 yard run from Stevenson that set Oregon St. up with first and goal at the Arizona 6 yard line. But the Beavers couldn't push the ball in, when Mannion completed his third down pass to Benny the Beaver, who wasn't an eligible receiver, and Oregon St. had to settle for Romaine's third field goal of the game, and a 30-6 lead midway in the third quarter.

Foles, never out of a game, found Gino Crump behind Oregon St.'s sophomore corner Rashaad Reynolds, who had played his best game as a Beaver up to that point, for a 47 yard completion, and then the stunned Beaver defense essentially stood and watched Keola Antolin (2) walk in, below, for an uncontested 13 yard touchdown. 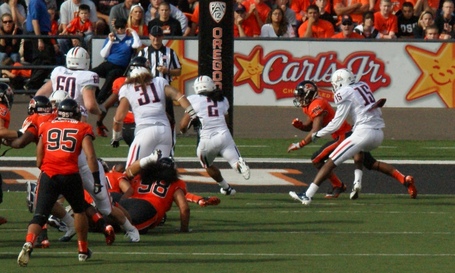 Faced with an unreliable kicker, and the possibility of making it a 2 possession game, Stoops sent Foles and the offense back onto the field, and Foles found David Douglas for the two point conversion.

Mannion immediately contributed to the ‘Cats comeback, finding an open Derek Earls, who tipped the ball to Richardson for a pick six, below, on the first play of the ensuing drive. Fortunately, Foles' pass on the conversion fell incomplete, and Oregon St.'s lead remained 10 points, 30-20, but with 4:37 still left in the third quarter. 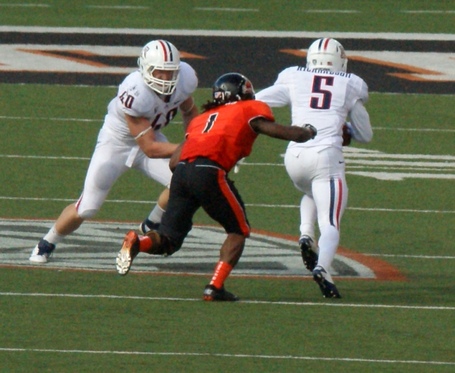 Stevenson's 21 yard run sparked an Oregon St. drive that quickly reached the Arizona 14 yard line. But an apparent touchdown pass to Rodgers was nullified by a holding penalty on Collin Kelly, and then Mannion missed a wide open Wheaton in the end zone. Romaine missed a 42 yard field goal wide left, and the Beavers had missed an opportunity to make it a 2 touchdown margin through no fault of the ‘Cats. 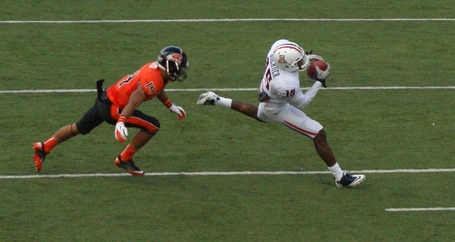 Foles completed 6 of 6 passes on the next drive, and a pair of Ka'Deem Carey carries cut the deficit to just a field goal, with just under 12 minutes left, and the once insurmountably looking Oregon St. lead looked like it might be completely blown.

Stevenson left the game for good, with concussion-like symptoms, and a scrambling Mannion came up a yard short on third and 7, and it looked like the Oregon St. collapse would be completed.

But Hekker uncorked an rolling 63 yard punt, pinning Arizona at their own 5 yard line. Jordan Poyer broke up Foles' third down pass, and Dugandzic attempted to run for a first down from punt formation. Seeing he would be stopped short, Dugandzic attempted a running kick, and got only 30 yards out of it.

Mannion completed 5 passes to 5 receivers, and got a 10 yard fly sweep run from Rodgers as well, capped by Halahuni's second scoring catch of the day, below, on a fourth down and 2 situation, to reopen the lead to 10 points, 37-27, but with still over 5 minutes to go. 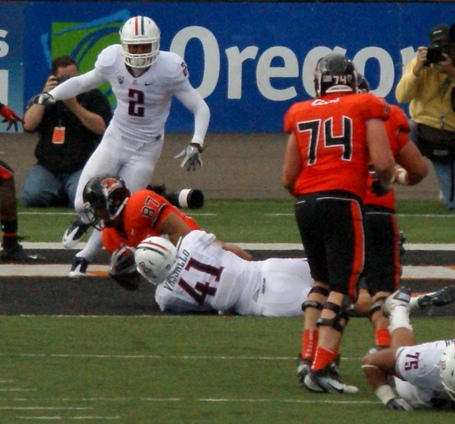 Foles immediately found Buckner for a 39 yard gain, and a 23 yard completion to Douglas had the ‘Cats in the red zone, at the Oregon St. 19 yard line.

Pac-12 officiating then struck again, as the back judge flagged Poyer for pass interference from more than 30 yards away. The same crew that had earlier marched off 16 yards for a 15 yard penalty, and stopped the clock after a completion that did not pick up a first down, and the receiver was tackled inside the numbers, ruling the receiver had gotten out of bounds, marched off 15 yards for a penalty that should have been half the distance to the goal line. That put the ‘Cats on the Beaver's 4 yard line, instead of outside the 8.

However, the Beaver defense dug in yet again. Poyer broke up a pass for Buckner, and then Anthony Watkins and Cameron Collins stopped Foles at the one yard line. Wynn and Feti Unga stuffed Antolin for a one yard loss, and Buckner dropped the ball on fourth down.

Oregon St. (1-4, 1-2) ran most of the clock out, and the Beaver defense made one last stop, ending their 6 game losing streak, and avoiding what would have been the longest losing streak the Beavers would have suffered since the 15 game one in the 1995 & '96 seasons, at the end of the Jerry Pettibone debacle.

The Beavers will look to put having lost 9 of their preceding 11 games further in their rear view mirror next week when they host BYU (4-2) in the last non-conference contest of the Oregon St. season. The Cougars, who embarrassed the Beavers 44-20 in the 2009 Las Vegas Bowl, have won 3 games in a row, after posting a 29-16 win over San Jose St. today in Provo. 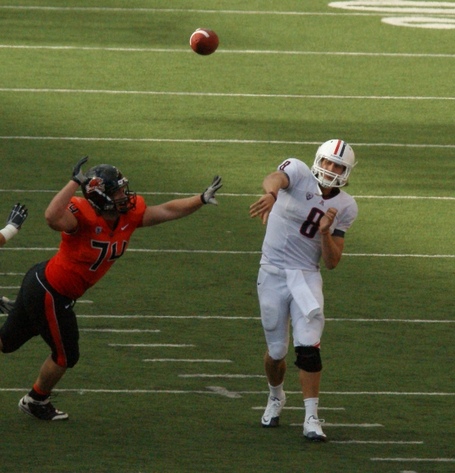 Foles, above, finished with 31 completions on 45 attempts, for 378 yards, but only 1 touchdown, and the 2 interceptions. Mannion, below, completed 32 of 41 passes, not counting the one Benny caught, for 267 yards, and 2 scores, but he also suffered 2 interceptions. 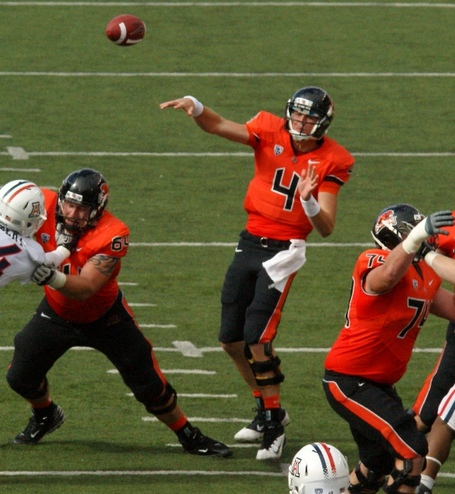 Arizona's inability to run the ball, amassing only 53 yards on 19 carries, more than offset their passing advantage. The Wildcats also were without their best receiver, Juron Criner, for much of the game. What befell Criner wasn't immediately apparent. Oregon St. managed 128 rushing yards, on 35 runs, not great, but better than they have managed since Malcolm Agnew went down after the season opener with a pulled hamstring.

6 different Beavers ran the ball, and 9 had catches, besides Mitchell's special teams catch. 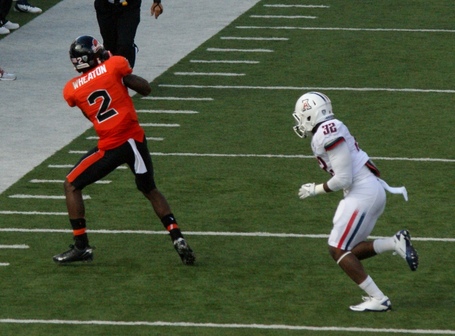 Wheaton, above, led Oregon St., with 54 yards on 6 catches, while Bishop was right behind, with 52 yards, and on only 3 catches. Rodgers had 56 total yards on 4 catches and 2 carries, having had the touchdown catch taken off the books by the penalty. Stevenson, Jenkins, and Halahuni all had 5 catches, as the Beavers did a good job of spreading the ball around.

Oregon St. was also 14 seconds from possessing the ball 12 minutes more than Arizona, an important factor in limiting the dangerous Foles' opportunities to do further damage.

"Sometimes, at the end, it comes down to some guys just stepping up and making plays," Riley said. "That's one thing we have been lacking, but today, when we had to have them, guys made plays."

But while the team put pieces together, and responded to adversity, a good sign, this isn't a good team yet.

Good teams don't throw pick 6s when protecting double digit leads in the second half. Or need to take a second timeout after already using one.

And while penalties were greatly reduced from the 13 that were a major contributor to blowing last week's game, down to just 5, and including the bogus one on Poyer on the last drive, good teams don't take a touchdown off the scoreboard with a holding penalty away from the play. 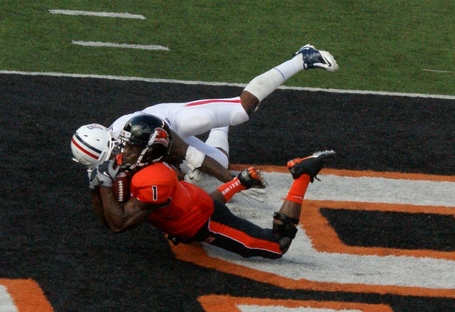 Also, there were still too many third downs where the play run couldn't produce a first down. It would be better to at least try to throw beyond the first down stick.

But the special teams blunders that have negated some good special teams plays in prior games were largely eliminated, a credit to special teams assistant coach Bruce Read.
And the crowd of 40,403, one of the smallest in several years, which included a very small Arizona contingent, got to enjoy what turned out to be a good day to be a Beaver for the first time in some time.