Ducks Dig Out Win Over Beavers

Share All sharing options for: Ducks Dig Out Win Over Beavers

In a game where both teams took turns playing well and poorly, Oregon executed best at the end, and claimed a four point road win in the 334th. Civil War. FSN, which carried the game nationally, got good tv, if not necessarily good basketball.

A competitive first five minutes turned into Duck domination, as a 9-0 run capped a 22-5 stretch that produced the game's largest lead, a 17 point, 33-14 Oregon advantage 4 minutes before halftime.

Fortunately for the Beavers, Oregon then did what Oregon has done on multiple occasions this season, and gave back a big lead.

Oregon St. came back to life with an 8-0 run to the break that cut the deficit in half, fueled by three straight baskets by Lathen Wallace, and a switch to man to man defense. The rally extended into the second half, and would eventually be a 28-7 Beaver streak that gave Oregon St. their largest lead of the game, when a pair of Devon Collier free throws opened a 44-40 lead with 9 minutes left.

The Ducks responded again, and Jay R Strowbridge produced three straight Oregon baskets, including driving layins on both sides of the key that got behind the Oregon St. defense. E. J. Singler answered a pair of Wallace free throws with his fourth three pointer of the game, giving Oregon a 51-48 lead as the clock wound down to the five minute mark.

The highly partisan Oregon St. crowd of 9,836 thought they were going to see their Beavers take control of the see-sawing momentum when Calvin Haynes found Jared Cunningham crossing on the baseline with a lob pass for a rim twisting dunk at the 4:39 mark that pulled the Beavers within 51-50. But it was as close as Oregon St. would get. 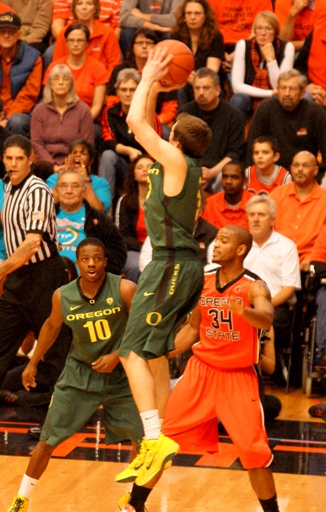 Garrett Sim (above) sank his third three pointer of the game to answer, and Strowbridge stroked another three pointer on the Ducks' next flight down court, as Oregon built the lead to 7 points three times going down the stretch.

A three pointer by Cunningham and put-back by Roberto Nelson pulled Oregon St. back within one possession with 9 seconds left, but Strowbridge closed the game out with a pair of free throws that gave Oregon the 63-59 win.

Oregon St. coach Craig Robinson characterized the Beavers' inability to execute the plays necessary to pull out the win as "pathetic", and Wallace admitted "We had some plays down the stretch that we didn't finish. And we had some turnovers and that pretty much killed us." 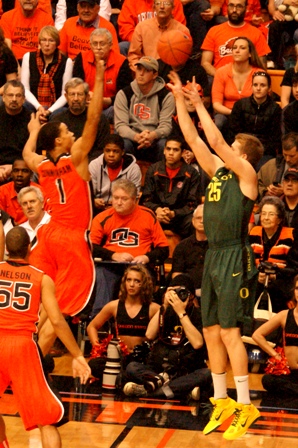 Singler, a Medford, OR, native (above) finished with a game high 16 points to lead Oregon, while Sim and Strowbridge both were right behind, with 15 apiece. Strowbridge had 13 of his points in the second half, and was an unexpected Beaver killer.

Nelson was the only Oregon St. starter to reach double figures, and he only booked 11 points. Wallace, shown below shooting over Oregon's Malcolm Armstead, came off the bench to score 15 points to lead the Beavers. 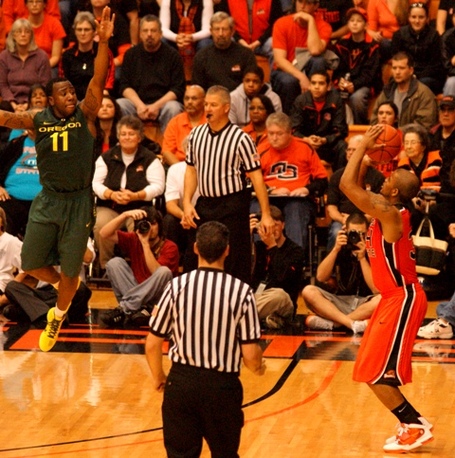 "Lathen was big," Robinson said. "He was due. He's been working in practice, as hard and as seriously as anybody on the team, but it hasn't been transferring to the games. Today, it did. Every time he shoots the ball, we think it's going in."

Oregon jumped out to their early lead with a combination of attacking the ball on both ends of the floor, and capitalizing on Oregon St.'s getting out of position. Burton in particular was late to the party several times, as a result of stepping too far out at the expense of leaving the base line area open.

Several shots were taken without the Beavers being in position to rebound, and not all outside shots are going to fall. Burton on a couple of possessions took a couple steps above the block in order to better meet possible incoming passes, and when shots were lofted without accounting for whether Oregon St. was prepared to rebound, it didn't matter that Omari Johnson was in great position. Up against as many as three Ducks, it was an easy matter to wall Johnson off, and have someone clean up the lose board with Burton behind them.

A similar problem arose on the other end of the floor. One requirement of playing a zone defense is that everyone actually be in their zone. Against a team like Oregon that moves the ball well on the perimeter, it's always tempting to step out to help. Which is what Burton did. That let Jovan Catron, who was back in action after missing both of Oregon's games a week ago with a calf bruise, get loose behind the defense, and while Catron isn't a game changer per se, you can't chase him after he has the ball.

Robinson corrected the problem, but the learning moment contributed to Oregon St. having to expend a huge amount of physical and mental energy to overcome the hole inexperience contributed to digging.

During the middle half of the game, the apparent criticism of Robinson's game management centers around two key points. Number one, why didn't Oregon St. return to the man to man defense that keyed their rally late in the first half? 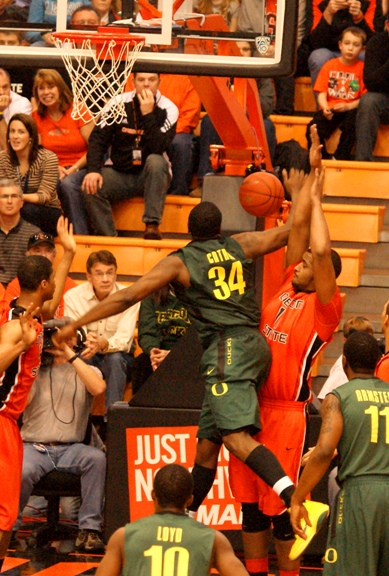 Oregon's Joevan Catron (34) was held to 8 points by the Oregon St. defense,

once the Beavers tightened up inside.

Robinson said afterwards that "It was hard, and it was tough. But we matched their intensity, and that was good. I thought we did a great job on the boards. So there were a couple things out there that were positive."

So why not stay with it more of the time?

The other had to do with using Angus Brandt and Kevin McShane too little, and too late. Brandt demonstrated better discipline about playing in position, and McShane as usual brought great energy to both the Oregon St. defense, and in the passing game offensively. As close as the game was at the end, a couple of baskets made or prevented would have been enough to make up for even all the missed opportunities that ultimately cost the game.

Robinson is correct about the Beavers (still) needing to learn to play 40 good minutes, but it seems that a good start would be more of Brandt's self discipline (despite his having less total experience on the floor), and McShane's energy. Enthusiasm and desire aren't lacking in the rest of the squad (this speaks to concerns about how much Oregon St. seems to "want to win"), but McShane has shown the experience that comes with being a senior to be able to apply energy without losing track of his assignment.

It should be noted, however, that game management down the stretch was good, as Robinson's use of time outs and substitutions still put Oregon St. in position to have a chance to pull the game out. Unfortunately, execution was lacking, while Oregon coach Dana Altman's squad, to their credit, didn't fold under pressure, and didn't repeat their mid-game breakdowns. 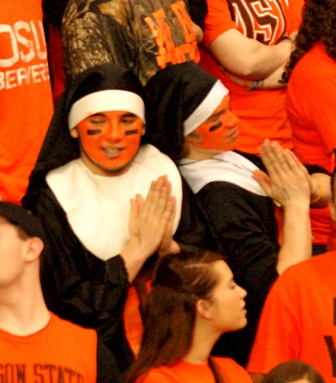 Even 'Divine Intervention' wasn't enough to put Oregon St. over

the top against Oregon.

The crowd was the largest in Gill in some time, and notably, the number of Oregon fans that showed up was the smallest in some time. Even women's Civil War games, traditionally much more lightly attended, even in "good" times, have drawn significantly more Oregon fans than were apparent today. This was a big surprise, and only makes what the Duck team pulled off more impressive.

The loss was especially inconvenient for Oregon St. (8-10, 3-4), who dropped into a rat race in the second tier of the Pac-10, with only four home games remaining in the conference race. The Beavers visit the Bay Area next, for games Thursday at Cal at 8 PM, and Saturday at Stanford, at 7 PM.

Oregon (9-10, 2-5) climbed out of the Pac-10 cellar with the win, and the games in the Bay Area have the potential to move any of the four teams as high as third in the conference scrum, or almost to the bottom of the pack.