Share All sharing options for: Oregon St. Makes A Statement

Oregon St. said farewell to USC Saturday night, in the last meeting of the two teams in Corvallis for a few years. The Beavers also said "We aren't done yet.", in reference to their recent slump, of back to back losses, and three of four in the loss column.

The game changed as soon as the teams switched directions to start the second quarter. With a stiff wind blowing in from the ramp on the north corner of the stadium, the Beavers had none the less taken a 3-0 lead despite going into the teeth of that wind, on the first of three Justin Kahut field goals.

With the wind finally at the Beavers' back, everything changed as Jordan Poyer picked off a Matt Barkley pass, and was off to the races for a 65 yard touchdown.

It was the beginning of what would be a 17 point quarter, which launched the second largest Oregon St. win over USC in the history of the series. Only the 38-6 win in 1914 was larger.

Things got worse just before halftime, when the Trojans lost starting quarterback Matt Barkley to a high ankle sprain, as Mitch Mustain was only able to mount one second half scoring drive. Barkley and Mustain combined to complete only half of their passes. 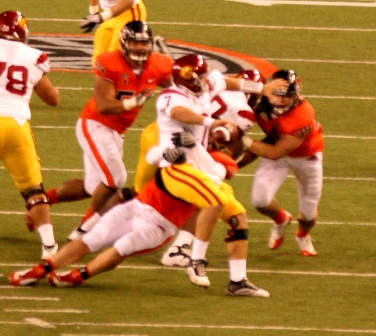 The win was a complete one, as Oregon St. out rushed, out passed, and out possessed USC. The Beavers also forced two turnovers, as well as forcing the Trojans to turn the ball over on downs four times, while playing turnover free ball themselves.

Special teams contributed as well, as Kahut, who had missed more field goals than he had made this season, was perfect. No small feat, considering the Trojans, who had won a couple of games recently essentially because they were able to block kicks, forcing Kahut to put extra elevation, and there fore less distance, on kicks, in the tricky wind. Kahut also made a crowd pleasing tackle on a kick return.

Punter Johnny Hekker had a big hand in the win as well, with a 74 yard field position changing punt, the second longest in Oregon St. history, as well as a pass for Jordan Poyer that forced a pass interference call, keeping the drive that led to the Beavers' first offensive touchdown alive. Hekker pinned USC inside their own 20 three other times, twice inside their own 7, with punts Oregon St. coverage was able to down.

"Contain 'Quizz, Wheaton and Katz and we should be fine."

ConquestChronicles.com summed up the USC game plan quite well. That proved to be easier said than done, though.

Jacquizz Rodgers had 26 carries, for 128 yards and a touchdown, and added 7 catches for 43 more yards, bringing his total offensive production to 171 yards, making him the game's leading rusher and receiver. USC will not mind missing 'Quizz's senior season, after his third 100 yard plus rushing performance against them. 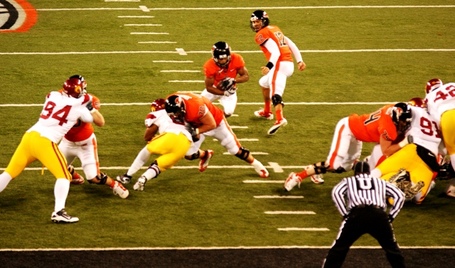 Jacquizz Rodgers (1) heads for the endzone, after Oregon St. gets everyone but the Umpire blocked. 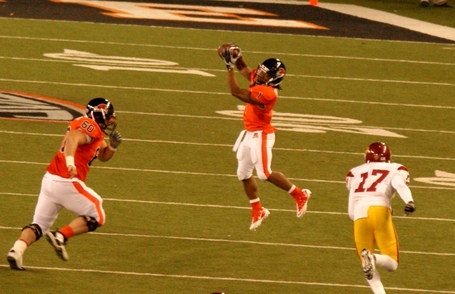 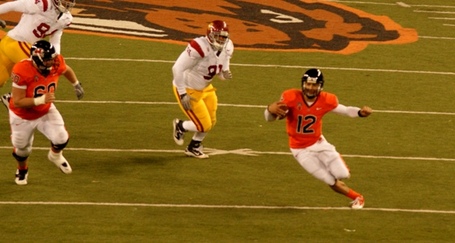 Ryan Katz, above escaping pressure from Jurrell Casey, moved the pocket as necessary, and completed 17 of 24 passes, 71%, for 2 touchdowns, and 154 yards. This despite an "official" incompletion that the Pac-10 crew didn't deem to be pass interference, which resulted in a 15 yard penalty when normally mild manner Oregon St. coach MIke Riley threw his headset. That "competition enhancing" call may have proven to hurt the Trojans even more than allowing the touchdown would have, as the deafing boos raining down from the Reser crowd only served to further fire up the Oregon St. team. 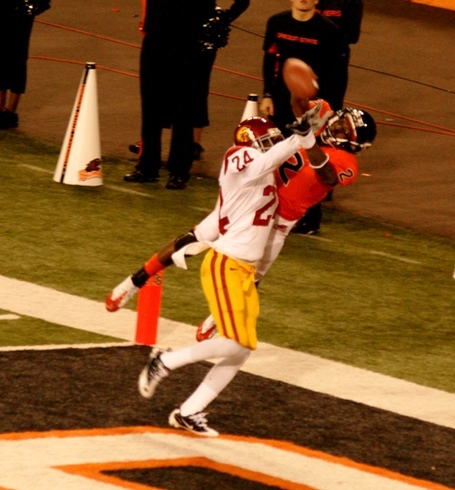 USC's Shareece Wright (24) was ruled to not have interferred with Oregon St.'s Marcus Wheaton (2).

It might be that the embarrasing 31-14 loss to Washington St. was the best thing that could have happened. Oregon St. could and possibly should have won both the one point double overtime loss at Washington, and the UCLA game that was won on a field goal as time ran out. Coming close can allow problems to be under-appreciated, or overlooked all together. But there was no missing things in the Cougar contest, and doubtless there were some private minutes of self reflection when 'Quizz issued a public apology, for issues largely on others.

Against USC, Oregon St. came alive defensively. But while increased energy helped, so did some scheme changes that actually allowed for success. Poyer's pick looked different than so many images of edge defense this season. There were actually two Oregon St. defenders in the play, allowing Poyer to jump the route without worrying about giving up a sure score if he didn't get there, because there actually was help coming from Keith Pankey.

For all the Brandon Hardin bashers, consider the following sequence. 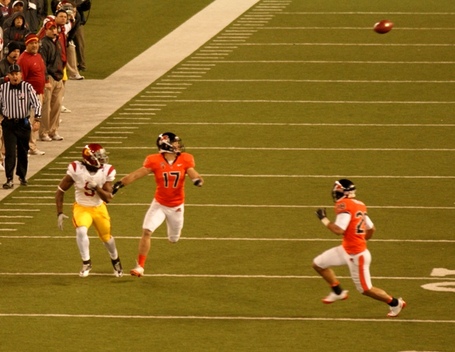 We see Hardin has good inside position, preventing David Ausberry from breaking the route inside. But Hardin would be hard pressed to also contain the play deep. Again, unlike so many plays all season, when Hardin (or others) was hung out in such a situation, we can see safety Suasei Tuimaunei (28) darting into coverage. 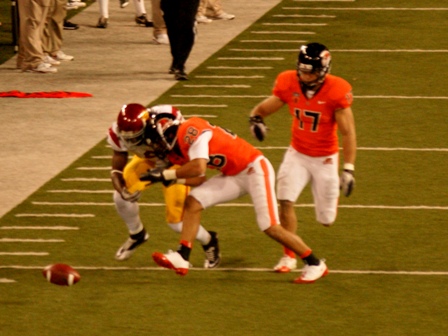 The result was a successfully defended deep out pass, where all of Ausberry's options were addressed.

Oregon St. also turned to Anthony Watkins for an expanded role in the secondary, and the sophomore, who brings substantial speed to the table, produced. 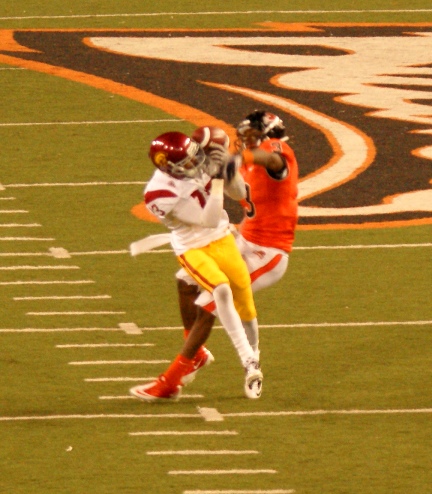 Anthony Watkins gets a hand on the ball, preventing a USC seam route from going the distance.

Even Lance Mitchell's would have been interception below that was wisely dropped to the ground (it was a fourth down, so holding the ball would have cost the Beavers the yardage from the point of the play back to the line of scrimmage) shows a second defender, James Dockery (4), in the area. USC's Ronald Johnson (83), the Trojans leading receiver, had no chance to get to the ball. 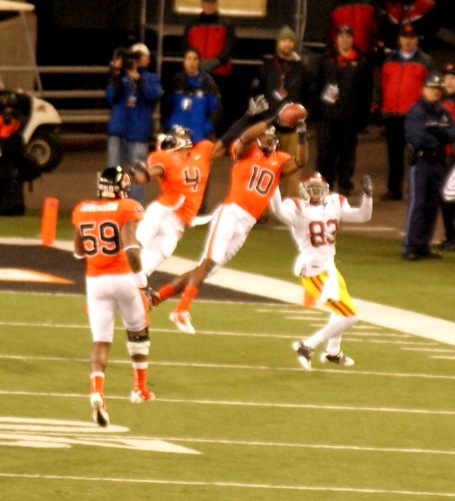 The offensive line that had trouble all day against Washington St. with moves to their sides, did a much better job of engaging the rush. In considering the sequence of the touchdown pass to Jordan Bishop,

notice how many Oregon St. blockers' numbers can be read on their backs. Because they are pretty well squared up. The result opened the lead to 22 points. 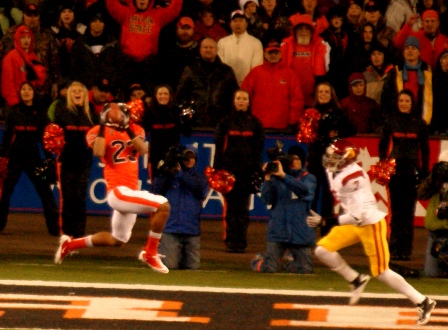 Bishop also had a key 29 yard catch that contributed to Oregon St. having a 5 minute edge in time of possession. 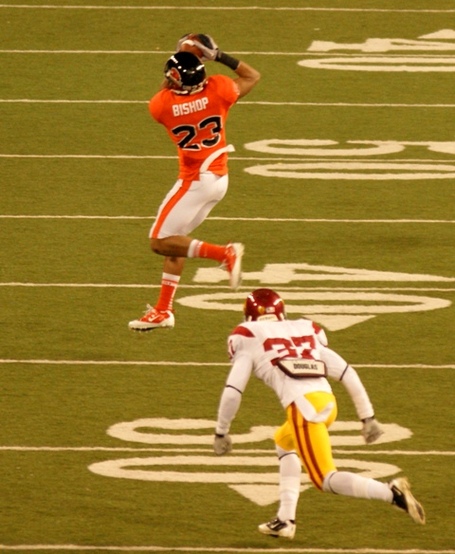 Stephen Paea was uncontrollable in the middle, and the fumble he forced in the fourth quarter made him the all-time leader at Oregon St. in fumbles forced. And the edge rush was also a factor, as Gabe Miller's sack of Barkley evidenced. 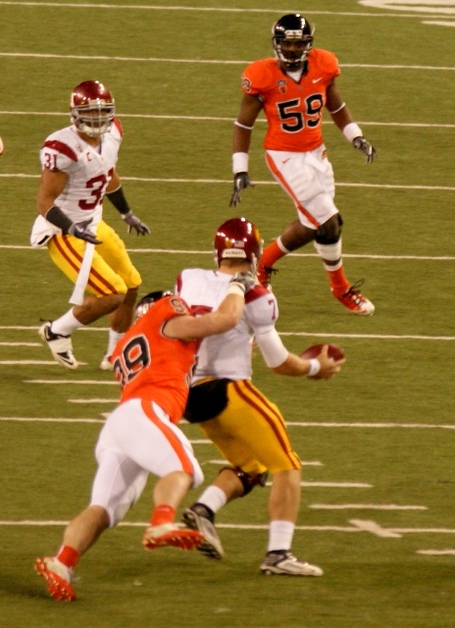 Though the season's smallest crowd, 44,969, turned out on a cold night, the atmosphere was unlike any since the last USC visit, exceeding even the 2008 Civil War. And while Oregon St. fans heard plenty of playing of "Fight On!" 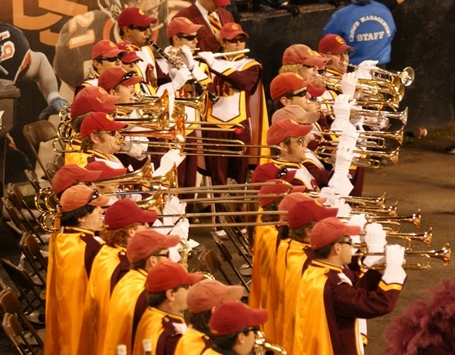 the Trojans did not get to play "Conquest", and Beaver nation enjoyed "Hail To OSU" 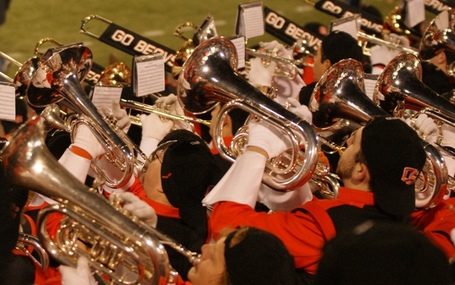 while storming the field to celebrate. 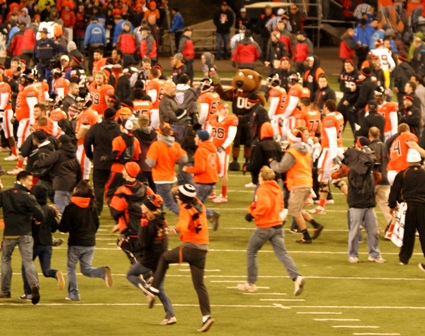