Share All sharing options for: Practice Begins For Beavers

Oregon St. kicked off pre-season preparations under hot sunny skies today, and no, no announcement has been made about who will be the starting quarterback on Aug. 31 when the Beavers begin the season against Eastern Washington.

Sean Mannion got the work with the 1s, while Cody Vaz ran with the 2s, except in drills where all 4 qbs were rotating. Both looked good, but to quote Chip Kelly, it appeared Mannion "won the day".

Mannion said post-practice he felt his biggest improvement over the offseason is his accuracy.

"I feel like I don't have to really think about putting the ball in a certain spot."

Yesterday, the team got ahold of new gear, and today, they got to put it to work.

NCAA rules preclude the use of full pads until the end of the week, but the various position groups wasted no time getting to work. 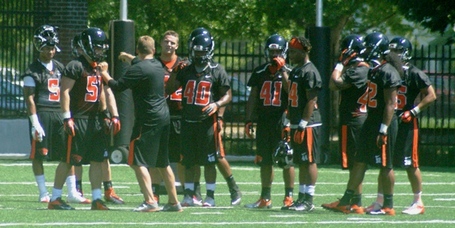 Trent Bray working "hands on" with the linebacker group.

And it was the first look at the new look numerals on practice jerseys as well. 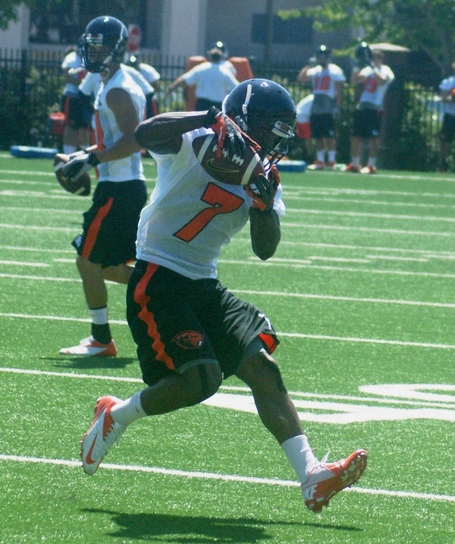 Brandin Cooks, above, looks season ready already, to no one's surprise. Kevin Cummings seems established as well, but the competition is on for the third WR spot. Richard Mullaney got some reps with the 1s, but Malik Gilmore is getting a chance to earn the job. It could be that Riley uses a committee at the position this year.

Some times the biggest news is what you don't see at practice, and JC DTs Charles Tuaau & Kyle Peko were both missing, as both are still working on eligibility. Riley is still hoping to be able to add them to the roster later in the week. It's created an opportunity for Edwin Delva, below working alongside Dylan Wynn. 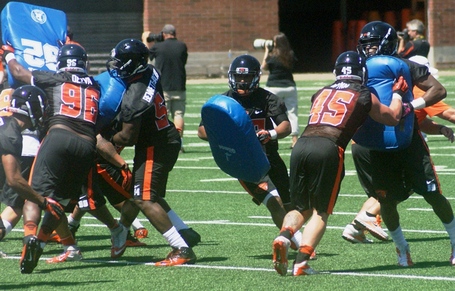 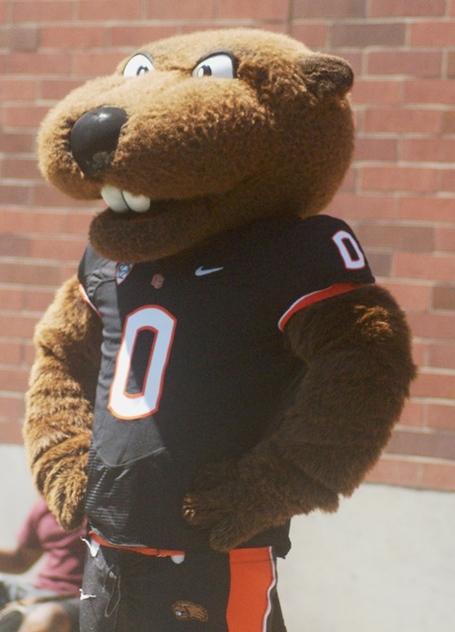 Even Benny was suited up, and ready to get to work!

A small crowd turned out on a hot day to watch. Practices continue daily at 11 AM, with the first double day on Saturday, when a second session will occur at 6:30 PM.