Share All sharing options for: OSU Draft Pick - What You'll Get - Jordan Poyer

The NFL draft begins tonight, and continues the next couple of days. Oregon St. has a couple of prospects that various analysts project to go somewhere in the top 4 rounds, wide receiver Marcus Wheaton, and cornerback Jordan Poyer.

Oregon St., and Pac-12, fans are well aware of what these players bring to the table, but visitors from NFL teams and around the country might be interested in a scouting report, so many SB Nation Blogs, Buildingthedam.com included, are sharing some insights. Today, we take a look at Poyer.

Strengths: Jordan Poyer is close to being the "complete" defensive back. Poyer became an All-American cornerback at Oregon St., but he has the ability to play multiple positions in the secondary. Lots of corners get converted to safety, often because they are decent backs, but can't cover 1 on 1 against the best receivers. Few go the other way. 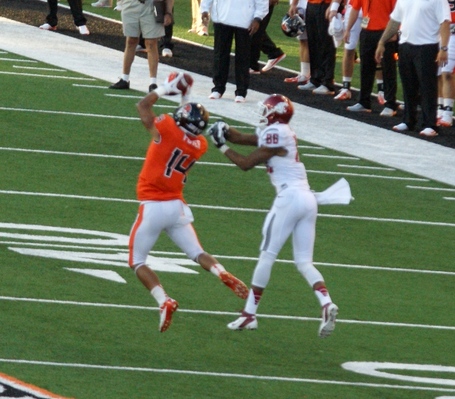 Poyer did, converting from safety to corner in his sophomore season, as Oregon St. head coach Mike Riley recognized a way to get more out of Poyer. And it's worth noting that Poyer had never played a down at the position, even in high school.

And an added benefit the Beavers enjoyed this past season, when they shifted to much greater use of nickel packages, and even a fair amount of dime coverage, was Poyer could take a corner assignment, or easily slide into the middle, back into a safety role. And opposing quarterbacks had to make that read, or be at peril of being picked off, something Poyer did 7 times in 2012, and 13 in his career at Oregon St.

Poyer, who was an all-state quarterback in high school as well as at safety, has a tremendous mental command of all aspects and positions in the game, which combined with his work ethic, makes him capable and valuable beyond his pure athletic ability, not that that isn't substantial. His decision making made him Riley's choice to be the Beavers' punt returner despite having faster candidates. As a sophomore, he was second on the team in all-purpose yards despite not playing on the offensive side of the ball.

Weaknesses: Poyer does lack the pure speed that makes some people sure-fire first round picks. He ran only a 4.54 at the NFL Combine, and a 4.5 is about as good as it will get. Poyer is also only 6'0" and 191 lbs., and so while he is good in run support, he's not a substitute for a linebacker.

If a team doesn't take that into account with their schemes, the result will be the disappointing outcome that usually ensues when a tool is misused.

Poyer can certainly compensate on occasion with his knowledge of the game, but there are situations where he wouldn't be best utilized in.

Intangibles: We already discussed Poyer's knowledge and decision making, but the reason those are strengths stem from him being a student of the game. That shows up in preparation, but also on the field, in terms of Poyer's ability to adjust on the fly.

Everyone gets burned from time to time, and Poyer is no exception, especially given that he's consistently drawn the toughest matchup the opponent has to offer. But with Poyer, mistakes don't get repeated, be they his or some one else in the secondary. They get corrected, and opponents that go back to the well frequently find Poyer waiting.

Poyer is also a natural leader. Despite coming from a small school in a small town (relatively speaking) both in high school and college, Poyer is the kind of player that others look to for both tactical and emotional leadership, and it never takes long for that to happen. 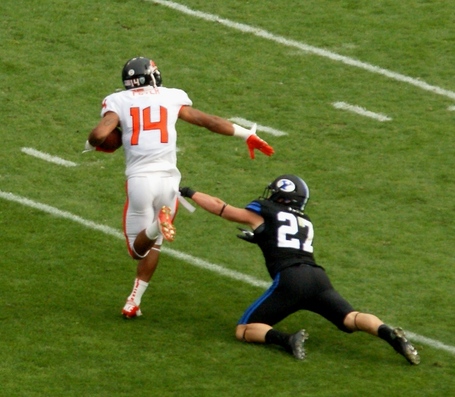