After an embarrassing and unacceptable 7-6 loss on Monday, Dylan Davis and Zack Reser gave the Beavs some stability on the mound, and the offense did plenty to beat the Hornets just as they should.

Share All sharing options for: Beavers Bounce Back, Cruise Past Sacramento State 8-1

Dylan Davis started the game for the Beavs, but he helped his own cause before he even stepped on the mound, hitting his 4th home run of the season, plating Michael Conforto and giving Oregon State a 2-0 lead. On the mound, as usual for Davis, the only issue was his control. He issued 4 walks and 2 hit batsmen, but struck out 3 and gave up just 1 hit. 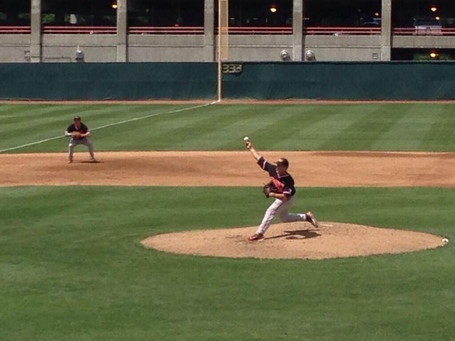 Meanwhile, Davis continued to provide the offense. He picked up 2 more RBIs in the 3rd on a single that scored Andy Peterson, who reached on a bunt, and Nick Rulli, who hit a fly ball double that maybe should've been caught. By that inning, Sacramento State was already on their 2nd pitcher of the game, as starter Sam Long went just 2 innings and picked up his first loss of the year, moving his record to 5-1. 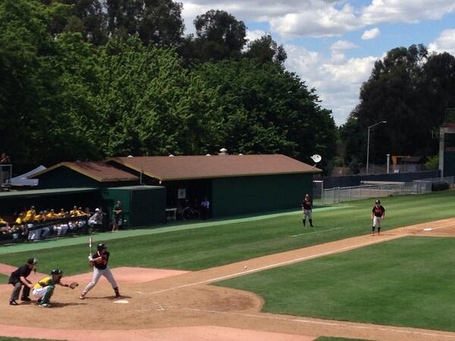 The Beavs tacked on another run in the 4th, which started with a Jared Casper walk and Logan Ice single. The Hornets got 2 quick outs on a SAC bunt and strikeout, and thought they had the 3rd when Nick Rulli hit a groundball to shortstop, but it was mishandled and a run scored, giving the Beavs a 5-0 lead.

In the 5th, Davis loaded the bases with 2 walks and a HBP, and Zack Reser came on and escaped by getting a backwards K on a curveball followed by a routine fielders choice to Peterson at 2nd. Reser went the next 4.1 innings, his only blemish a solo home-run to Rhys Hoskins with one out in the 8th, the first earned run Reser has surrendered this season. By then, though, the lead felt secure (even with this team's bullpen!), as the Beavs had scored 3 runs in the top of the 7th. 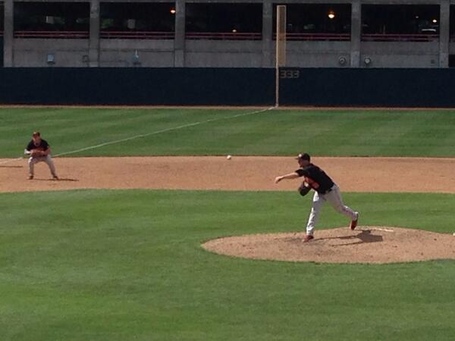 Nick Rulli started the 7th with his 2nd hit of the day, a single up the middle, stole 2nd, and advanced to 3rd on a balk. Michael Conforto, who had a relatively quiet night at 0-2 with 3 walks, popped up, and Davis reached on another defensive miscue from the Hornets infield. Jeff Hendrix made them pay, with a bomb into the left-centerfield gap, a double with an advancement to 3rd on the throw home. He came around to score on a Jared Casper fielders choice.

Reser exited the game with 2 outs and nobody on in the 9th, ending his day at 4.1 innings, 4 hits, 1 strikeout and 1 run, earned. He induced double plays to end both the 6th and 7th innings, and got the win that improved his record to 4-0 for the season. Reser gave way to Chandler Eden, who grew up in nearby Yuba City. The Hornet batter offered at Eden's first pitch, flying out to right field to end the game. 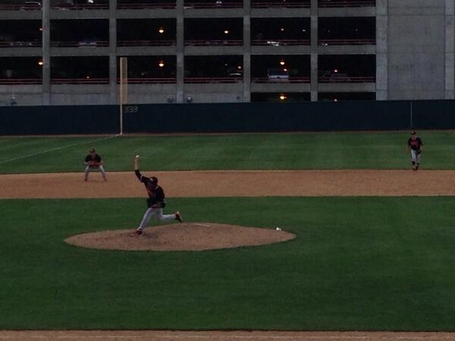 Eden's lone pitch of the game (via @thatSergey on twitter)

The Beavs now rest up until the Civil War series starts on Friday. Hopefully they've learned all they can from this disappointing mid-week series split that moved them to 28-8 on the year. Go Beavs! 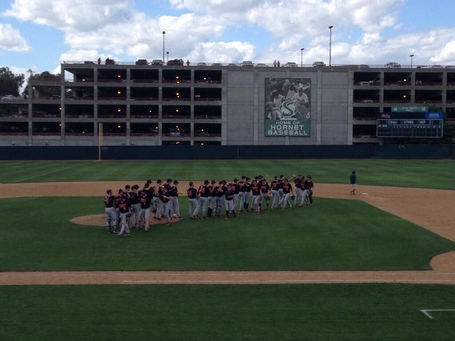