Here's the look that OSU Equipment was sharing: 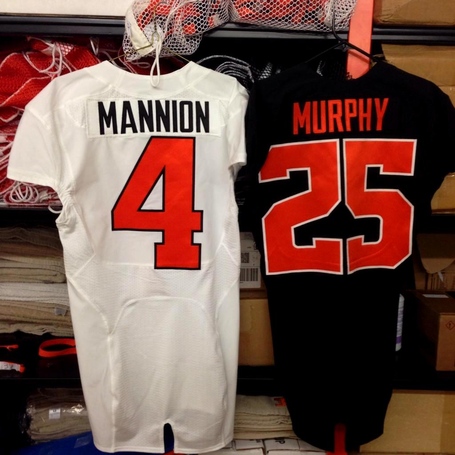 It's a sign of the times that instead of old game gear, or plain stuff, even practice gear is cooler and more stylized than what some teams called game gear not so long ago.

It seemed to energize the troops, but didn't change the prevailing trend of the defense out-playing the offense overall.

Oregon St. got TE Connor Hamlett back, after foot and knee issues held him out since midweek.

Hamlett said the MRI that was done after first having an x-ray came back showing no damage, and he has been cleared, though he did do some icing therapy.

Unfortunately, it was only a trade of 1 TE for another, as Caleb Smith had to be helped off the field, and the training staff was assessing and icing his left knee.

The days' drills were also without both WR Victor Bolden, who took the day off to allow the hamstring he tweaked yesterday time to recover, and LB D.J. Alexander, who banged up his right knee yesterday.

Both seem to be in the optimistic day to day category.

Offensive lineman Grant Bays did return, after a couple of days out with back spasms, and took reps at center, as the o-line shuffle continues.

One player seeming to be making a move toward playing time over the last few days is WR Jordan Villamin. At 6'4" & 240 lbs., Villamin, a red-shirt freshman who spent last year gaining eligibility, is easily Oregon St.'s most physically imposing wide receiver, yet still retains the speed and long stride to be a deep threat.

This evening will be the first evening that the Beavers hold a second practice during the day, beginning at 7 PM, and lasting until around 9 PM. Since today's first session was a full pad practice, this evening by NCAA rule must be in shells only.

Just like the day practices, the public is invited to watch the evening session.

The Beavers will take tomorrow off, and resume work on Monday at 10:20 AM. Monday evening will also have an evening session.