Oregon St. Breaks Out The Pads, And The Water Balloons

Share All sharing options for: Oregon St. Breaks Out The Pads, And The Water Balloons

The 5th day of pre-season football practice at Oregon St. saw the Beavers break out the pads, and the water balloons.

NCAA rules require 4 days of acclimation before teams can don full pads, and before they initiate full contact (don't tell the NCAA that Dylan Wynn and Tyler Anderson, and a few other like minded Beavers didn't exactly wait all week), so "Full-Contact Friday" has become one of head coach Mike Riley's favorite days of preseason.

The defense remained ahead of the partially depleted offense, but WR Richard Mullaney had his best practice of the week, with a couple of sideline out route catches from Sean Mannion.

TE Connor Hamlett is still out, and no update on his getting an MRI on his knee, and an x-ray on his ankle was provided.

Isaac Seumalo is still walking with a boot on his left foot, and guard Grant Bays missed drills for the second day in a row, with his back acting up as happened at the end of spring ball. It's becoming apparent that Bays may not be able to hold up as an every down o-lineman, and its looking increasingly likely that once Seumalo returns, which possibly won't happen until the San Diego St. game in week 4, it will be at right guard, with Josh Mitchell staying at center.

Today was also the second day that Gavin Andrews, originally planned to be the starter at right guard, worked on the left side, and Andrews now expects to remain there, with Dustin Stanton moving to the right side.

"It's felt good," Andrews told reporters after practice. "I think everything's moving a little smoother for us now."

The first day of full pad practice ended a little early for a pair of players Oregon St. is counting on for big seasons, as both WR Victor Bolden and LB D.J. Alexander had to pull out.

Bolden appeared to tweak a hamstring, but was walking normally by the time the post practice water balloon fight ensued.

Alexander had to have ice applied to his right knee, and watched the last part of practice with the ice-wrap still in place. Alexander's knee will doubtless be the first topic of interest tomorrow.

Larry Scott continues to work back into what was expected to be a starting role, with Dashon Hunt, who capitalized on an injury to Scott in the spring, himself still on the shelf with a hamstring issue, though he's expected back in action Monday. The secondary looks to be the deepest in several seasons once all the pieces are in place.

The first full-contact Friday was also selected as the date for the first water balloon fight of the season as well, always one of the tension relieving breaks the players look forward too. Here's a look:

In addition to several pro scouts, the Pac-12 Channel was on hand to do an hour long training camp show, which airs tonight at 9 PM, and it produced a sight not so long ago no one, and I do mean no one, would have ever expected to see.

Recently retired long time Oregon defensive coordinator Nick Aliotti is now an analyst for the Pac-12 channel, but was until his job change undoubtedly absolutely the last person Coach Riley, who as we know encourages nearly everyone to come watch practice, would have ever allowed to observe his offense on the Prothro practice field. 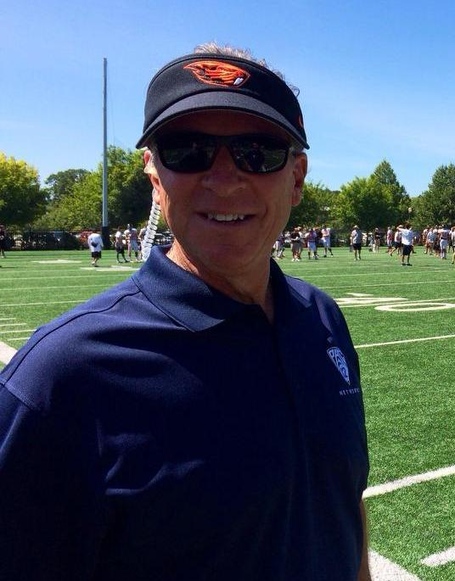 Still, it was surreal seeing Coach Aliotti not only at an Oregon St. practice, but sporting a Beaver visor! 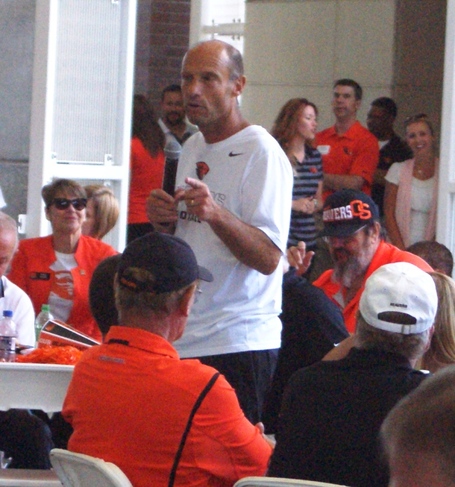 Following the water balloon battle, today was also Bar-b-que with the Beavers day, and Coach Riley was fired up about firing up the fan base.

It was also the most comfortable day of practice all week, and based on the forecast, probably the best day in the week to come, which made for a practice that felt the most like a game might (finally) be imminent.

At least enough so to cue the fight song! 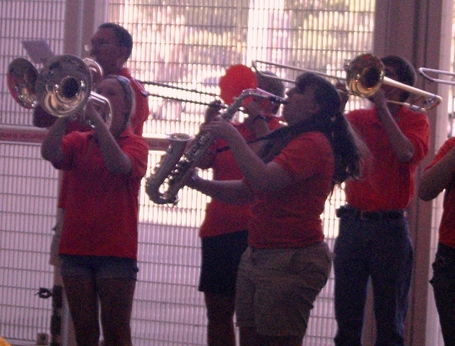