Number 23 is tight end Kellen Clute, who is a solid blocker and receiver.

Clute only racked up 159 yards on 19 catches with 2 touchdowns last year. He was sound across the board though, and was rarely seen or heard during games. This was understandable though, considering the Brandin Cooks show, and the two more notable tight ends above Clute. He was steady though, as he was the only tight end to play every game in the season.

Kellen Clute is third place in the Oregon State tight end troika, which is still pretty good. Pacific Takes even listed him as the 4th best tight end in the Pac-12 this year. With Cooks gone and with the receiving corps still looking a bit banged up and even more importantly they are exceedingly young, the tight ends will all be relied on. He made some nice catches in the scrimmage, even though the defense did swarm him immediately. 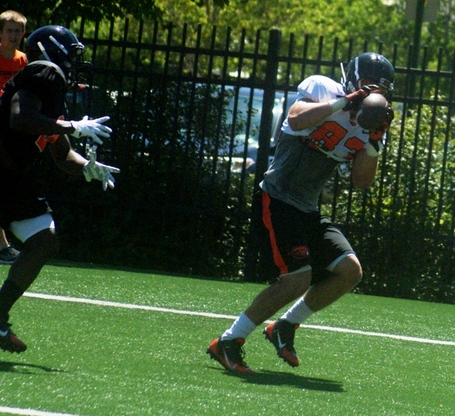 Past the receiving yards he will also be needed in the ground game, although he is the smallest listed tight end on the Beaver roster at  6'5" and 248 lbs. He has proved to be decent over his time at Oregon State though, rarely getting called out for mistakes, and it is more rare for any blocker to get much praise heaped on them. In big formations he will be especially helpful, when the extra muscle is needed to punch through for short yardage.

He will be a solid contributor, rarely having a large impact, but his play will quietly support the Beavs.