A redshirt freshman, Hunter Jarmon is competing for the slotback position and comes in at number 24.

Jarmon came in as a freshman from Texas with the receiver roles all taken in front of him. He worked as a slotback, but with Kevin Cummings starting and playing for half the season there was no reason to burn his redshirt. He played baseball initially for OSU also, causing some comparisons to Bo Jackson, although that may be a bit of a stretch as he played minimally in the outfield. He returned to focus strictly on football in spring practices however, and now it is time to see if that choice pays off for the wideout.

There is a competition between Malik Gilmore and Jarmon currently in training camp, but Jarmon seems the best bet to win the role long term. There are possibilities where maybe they end up trading starting positions as the season goes along, but Jarmon seems to be slightly better from the limited sample size of both. In limited looks Jarmon has looked quick and at 5' 11", 200 lbs he should have enough size to block downfield as well. 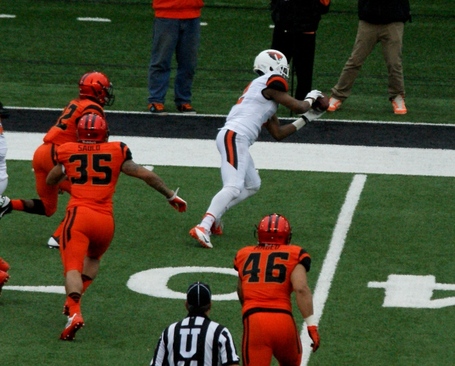 Gilmore struggled to create separation when he filled in for Cummings, where he only had 6 catches in the 4 games Cummings missed for a total of 57 yards. The tape does not look better either, as he does not run great routes and struggles to lose defenders. I do not mean to condemn Gilmore, he could grow and become a cog in the Beaver offense, but from the very limited time either player has shown Jarmon seems to be superior.

Unfortunately, Jarmon does not have much public tape outside of the spring showcase where he made some nice plays, but I believe that he will win the job and be a productive player for Oregon State this year. He has the talent to succeed, now he just needs to apply it in games.