With training camp rolling and the season right around the corner BTD is counting down the best players on this year's OSU football team, starting with punter Keith Kostol.

Keith Kostol was a decent punter for the Beavers. He did not make a lot of the mistakes that are sometimes expected of Beavers punters, but he also did not consistently help change field position for the Beavs. An ankle injury forced him from the season opener and it may have played into his play all year, as he never seemed to have quite the same booming kicks from his first year. The loss of long snapper Michael Morovick may also have affected his timing as well, only increasing the difficulty of his job. 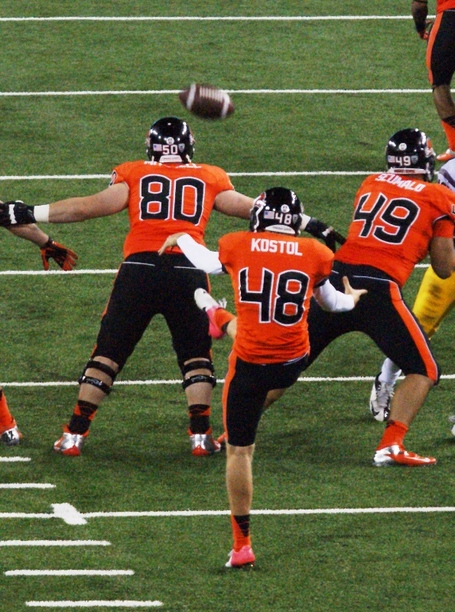 Although it seemed that he had fallen off a bit last year the numbers seem to show that he was about the same as his first year. He averaged 41.9 yards his first year in 59 punts (53rd out of 119 of D-I punters), including the one above, and that did decrease to 40.5 yards in 52 punts (85th out of 123 D-I punters). If we use 52 punts as a baseline, that would be about 72 yards of field position lost on the year. He also had roughly the same number of touchbacks and punts inside the 20. The reality is that Kostol has been consistent across two seasons, and the hope will be that he can improve off of those campaigns.

As stated above Kostol is a consistent punter, but should be able to improve. Johnny Hekker made a similar progression as listed right here: Fr-39.7, So.-40.1, Jr.-41.7, Sr.-44.0. Kostol has the ability to match the averages of former Beaver punters Sam Paulescu and Hekker, where Paulescu averaged 43.0 yards per punt before bouncing around the NFL. Kostol may not ever reach that level, but if he can match that 43 yards a punt average (which would have been 31st among D-I punters last year and 2nd among Pac-12 punters) that would be a good way for him to end his Beaver career. With his electrical engineering degree he should be fine either way though.