Oregon St. Set To Scrimmage, But Will We Learn Much?

Share All sharing options for: Oregon St. Set To Scrimmage, But Will We Learn Much?

Oregon St. is halfway through pre-season football preparations, and tomorrow the Beavers will hold a scrimmage, including special teams, of 50 plays or so in Reser Stadium.

The scrimmage will be the conclusion of the day's practice, and the week's work, and will begin at about 11 AM, with officials on hand.

But will we learn much?

It's not so much that head coach Mike Riley won't want to tip off too much in the scrimmage, which the public is invited to, as is the case with all Oregon St. practices; its that the ongoing injury issues the Beavers are battling will limit what can be done.

Wide receiver Richard Mullaney, who had just returned to action yesterday, didn't make it through a second practice before having to be carried off by a pair of trainers. It's not a case of re-aggravating the groin injury that had sidelined him before; this time it is an injury to his right ankle, which had him on crutches after practice.

"I hope it's not bad and he gets back pretty fast," Riley said. "We have a chance since Victor's coming back, and Dockery's back, so in a couple weeks we'll have everybody together. So hopefully it's not too bad."

Riley was referring to the return of Rahmel Dockery, who was back in action for the first time this week, after what did turn out to be a concussion, and hopeful for the impending return of Victor Bolden, who ran during today's practice, but didn't work in contact drills.

It's unknown whether Bolden will see contact action in tomorrow's scrimmage.

WR Hunter Jarmon also missed practice with a pulled groin, and while he said he hopes to be back by the middle of next week, he will also miss tomorrow's action. 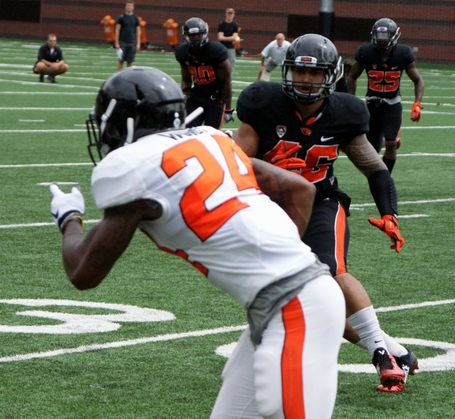 RB Storm Woods, above, was back at work, after missing a single day with a still back, but FB Tyler Anderson was still out with an injury to his left leg and knee.

The offensive line was still without Sean Harlow, out after a hard hit to the head a couple days ago, as well.

The defense got CB Dashon Hunt back for full action, but CB Malcoim Marable was out for the second day, and DT Siale Hautau missed practice for the first time in camp.

LB DJ Alexander still didn't return, and its unlikely Riley would bring him back in the scrimmage when he hasn't practiced in over a week.

Even the special teams could be impacted, as kicker Trevor Romaine missed a second day with a sore leg.

Riley said no one should see more than 20-25 reps in the series, but it will be another chance to see the depth of the defense, and probably as much or more of the battle to see whether Brent Vander Veen or Luke Del Rio is more likely to become Sean Mannion's backup.

Based on practice, Vander Veen is playing better, but Del Rio, and his familiar name, are being given every chance to work his way into the job. How they look under game like circumstances could go a long ways in making the decision.

At the very least, it will be something of a dress rehearsal for game day, the first of which, the opener against Portland St., is just 2 weeks away.