There was some good news on the injury front today as Oregon St. continues to prepare for football season, as Isaac Seumalo was at practice without the boot on his foot for the first time, an encouraging sign as his reevaluation by the doctors next Tuesday nears.

WR Richard Mullaney was back in action as well, but the list of players out with a variety of nagging issues grew ever larger, with a couple of names not previously on the injury list added.

Offensive lineman Sean Harlow was a spectator, after a blow to the head yesterday, and RB Storm Woods was also out of action, with a sore back. FB Tyler Anderson's leg injury sustained Tuesday still has him sidelined as well.

Harlow was not diagnosed as having a concussion, but was held out of practice to be safe, according to head coach Mike Riley.

WR Victor Bolden, who practiced in shells yesterday, seemed to have suffered a setback, though he is still acting as almost a personal coach for Xavier Hawkins. WRs Hunter Jarmon and Rahmel Dockery both missed drills as well, as Jarmon has a strained groin, and Dockery is still out with a head issue.

DB Dashon Hunt is still working on only a limited basis, still dealing with a hamstring issue, and CB Malcolm Marable also had to watch today's drills.

Kicker Trevor Romaine was out with a sore leg today as well.

And LB DJ Alexander is still out of action with the after affects of knee and hamstring injuries.

The hits to the depth chart have provided great opportunities for reps for some players though, and a couple of them are capitalizing. 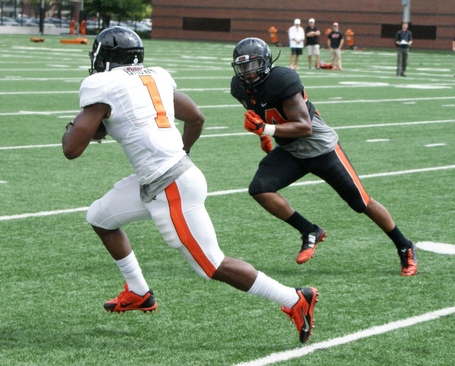 Chris Brown fans have been clamoring for an expanded role for him in the backfield, and the injuries at RB and his being at 100% quickly after a twisted ankle a couple days ago provided an opportunity today to impress both rushing and as a receiving target out of the backfield.

Freshman RB Ryan Nall continues to impress in returning kicks, adding special teams coach Bruce Read to his list of coaching staff fans. Nall is a big strong player at what looks like more than the listed 240 lbs on his 6'2" frame, and while he isn't a burner by any stretch, he is faster than you think, and with that size, the law of inertia is giving Nall a lot of inertia in his quest to get on the field early.

Today was a single practice day, one in which the defense continued to mostly dominate the mix and match offense that changes up who is where on a daily basis, and can't build any consistency or timing.

The only real concern with the defense is that the offense is only rarely able to extend the field, and so the defense is naturally getting more and more aggressive, both with scheme and individual play.

But when the offense does get off a deep play, there have been some effective ones. The trouble with an aggressive defense that's putting as many as 11 in the box, and sending 6 or 7 some times, is that if they don't get home, the potential for a big play the other way is very real, as has been exposed several times the last couple of seasons.

Tomorrow will be a "doubles day" with an evening session following the mid-day full pad drills, and a scrimmage will follow as the later part or Saturday's single practice, which will be held in Reser Stadium, and with officials on hand, as they go through their pre-season drills as well. The scrimmage is expected to begin about 11 AM (day time practice begin at 10:20 AM).

This will be interesting, as both the offense and defense have been rather physical down field, and based on recent years experience with Pac-12 officiating, a considerable number of flags would have flown against both units for early contact. In 2 weeks, we will be on the eve of seeing how it all works out, in the opener against Portland St.