The Action Was Hot At Oregon St. Practice

Share All sharing options for: The Action Was Hot At Oregon St. Practice 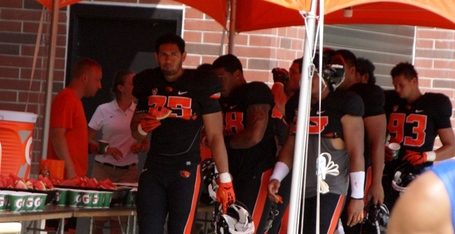 As a result, the most popular place at the Prothro practice facility was the Gatorade and watermellon tent.

Not much gets accomplished on a day like this, where the sole objective is to survive the day, and make it to another day.

Compounding the problem for the offense is the absence of a number of key players. TE Connor Hamlett, who returned to action late last week worked all day, but TE Caleb Smith, who banged up his leg Saturday, watched drills today.

So too did WR Victor Bolden, though he was moving well, and should be back in action shortly.

And WR Richard Mullaney left practice early, and got ice on his hip and groin area. It wouldn't be surprising if Mullaney misses several days.

RB Damien Haskins returned to action after watching for a week after a pre-camp knee scope procedure, but he didn't make it to the end of the sweat-festival before needing ice for his knee.

Fortunately, offensive lineman Grant Bays was back in action, after experiencing back problems late last week.

Isaac Seumalo remains in a boot, and head coach Mike Riley said Seumalo will have his foot re-evaluated next Tuesday, August 19.

The offense did get some encouraging news, with the much debated JC transfer lineman Kyle Peko on hand, and listening in on the position discussions. Peko now expects to be able to begin practice next week, after summer term grades are official. 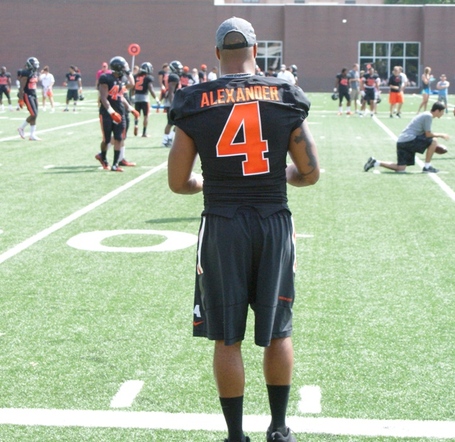 Defensively, with the return of 2nd string CB Dashon Hunt to at least light duty (he was working in shells vs. everyone else in pads), the defense is almost entirely healthy, with only DJ Alexander, who was working on his assistant coach with a clipboard skills, missing.

Alexander didn't exhibit any lingering ill affects of having his knee banged up, but said it would be a couple more days before he would be back. Possibly after the current heat wave breaks?

As one might expect, a beat up offense again didn't fair well against a healthy and hungry defense, with deflected passes, running backs dumped for little gain, or even losses, and mostly only short completions coming.

The one caution is that an offense that has trouble stretching the field isn't stretching the defense very often, so we aren't seeing how well the defense is handling the deep stuff very often, and on the occasions Sean Mannion can get someone deep, the middle field coverage is still problematic. It's the only apparent area of concern with the defense that mixes veterans with youthful depth, more depth than Oregon St. has had on that side of the ball in several seasons.

This evening sees a second day with a second practice, a shells only affair from 7 to 9 PM tonight, with another day session tomorrow at 10:20 AM.

Riley did announce this coming Saturday's 10:20 - 1 PM practice will feature and finish up with a scrimmage in Reser Stadium, with the public as always invited.