Football actually has 2 New Year's Day per year. On one of them, we (people who are more associated with Oregon State than any other university) traditionally watch someone else play in the Rose Bowl.

Today is the other one, the first day of August, the day that is the beginning, and eve, of football season. Tomorrow, the Oregon High School Shrine Game will be played, and the next day is the NFL Hall of Fame game. Some college teams even begin practice, if they play their opener prior to Saturday on opening weekend. So for the first time in months, we will not be without competitive football on a weekend in this country.

The rest of the college teams, including Oregon St. at 10:20 AM, begin practice Monday, though nothing major will happen then, in a helmets only acclimation period, mandated to acclimate players who have been working out almost daily since spring ball to working out.

And we will be off on the best season of the year, football season, which will run until early January when the National Champion will be determined, in a game matching the winners of the Rose & Sugar Bowls, and at the professional level, early February, when the Super Bowl probably won't be won by Seattle (in a half century, less than 10 teams have repeated).

What kind of a season will it be for the Beavers?

It will be a season with 7 games at Reser, a real rarity; so much so that Athletic Director Bob DeCarolis couldn't bring himself to bring about an 8th one, and a payoff that would take a step toward paying for any of a number of capital projects Oregon St. still needs to complete to stay in the facilities modernization race that is modern day athletics, the payoff that NCAA rules allow to payback for having left most of Beaver Nation behind when the team travels to Hawaii.

But will even the unusual 7 home games that many programs consider the absolute minimum to pay the bills provide a boost in the W-L record that barely broke over .500 last year? One that the Beavers, uncharacteristically, played much better, overall, away from home than at Reser. 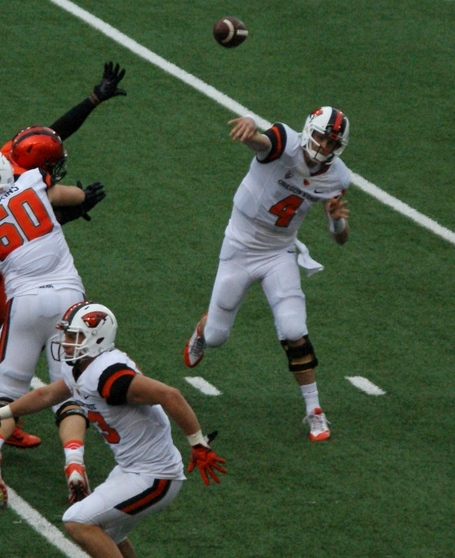 Senior quarterback Sean Mannion, above, will be back to rewrite the Pac-12 record book passing section. Can Victor Bolden come close to playing to the level of Brandin Cooks as a sophomore (forget about last year, that will take more time at a minimum)? Will Richard Mullaney be able to stay healthy (something he couldn't do this spring), or find a way to consistently play at the level he did only on occasion last season?

Can offensive line coach Mike Cavanaugh keep enough bodies healthy enough to work beyond zone pass blocking enough to actually provide running lanes for Terron Ward and Storm Woods when their running with the ball doesn't come as a complete surprise? Will Chris Brown get a chance to carve out a share of those runs?

Will senior safeties Ty Zimmerman and Ryan Murphy communicate well enough to make sure someone has over the top coverage on every play?

Can coach Mike Riley beat a Big Sky team this year? And can he come close to the early season run of wins that have led to bowl trips the last 2 years? Something else that's been unprecedented in Riley's tenure.

We will begin to get insight into these questions next week, and we will get to have a great time finding out starting at the end of the month, when we get to tailgate again, go on road trips, listen to the band, chant after first downs, and high five Benny. 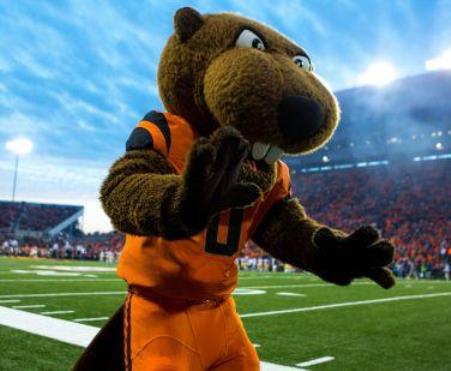 Of course it will be more fun if it usually results in wins, especially in games against USC, Stanford, Arizona St., Washington, and Oregon, all of whom are picked to again finish ahead of Oregon St., after they all beat the Beavers last year.

At this point, there's no reason not to look forward to finding out! After all, playing on the other New Year's Day of the season is still a possibility.