The Craig Robinson Era: Some Thoughts about the Nuances of Success vs. Failure

Was Craig Robinson's time at Oregon State a complete "failure"? Did he ride the wave of his famous family connections and put the program back into the hole he came into? As a personal view I think we should re-evaluate this type of appraisal of Robinson that his "era" was a complete failure.

Share All sharing options for: The Craig Robinson Era: Some Thoughts about the Nuances of Success vs. Failure

In 2008 we saw a new and unknown coach come into the Oregon State basketball program; in 2014 we saw a coach let go from the program that still projected an unknown quality to his personality as well as what he accomplished.  For many Robinson was a unqualified failure, but is it really this clear cut?

For me I see much of the "Robinson era" as being broken down into two parts: 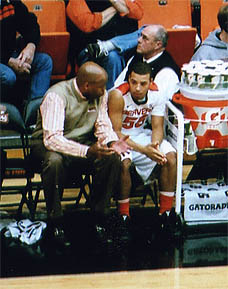 The First Part = Is having him come into a program that just came off one of the worse Pac10/12 program performances ever, and a program in such a hole that we had to let a coach go during a season. Robinson came in and took a team that had not won one conference game the season before (and was 6-25 overall) and went 7-11 and 18-18 overall in his first season coaching at OSU (the Beavs in the three seasons before Robinson had only won 8 conference games total for three seasons!). He was able to bring in some excellent talent, such as the NBA draft quality of someone like Jared Cunningham. He was able to help get the basketball practice facilities headed in the right direction (opened in 2013) and was able to reconnect with some important alumni like Gary Payton. To me he did what he was hired on to do, and at times was doing it very well.

The Second Part = Overall though the latter part of his "era" was indeed a failure. He never was able to build on the first part of his time at OSU. He could not change/adapt nor could he seem to understand how to improve his coaching to fit into a D1 big conference level of coaching. I do very much agree with other criticism of Robinson, and he came in as a bit of gamble for the program being fairly under-qualified for Pac-12 coaching. It was a gamble that was needed for the desperate times the program was in in 2008, BUT after he established some success, he just could not improve his coaching with experience, and as such we saw the program get into a rut, and then start to slide backwards.

Now as a total thought experiment, and to be honest I cannot remember when his initial contract was up so I am just playing a total "what if" game here, and after the 2010-11 season Robinson and/or De Carolis says "okay, that is enough, I/Craig got the team where I/he can get it to and it is now time to move on and allow the program to find the next guy to build on the foundation I/Craig has established and get this program to the next upper stage of its 21st-century evolution." Robinson leaves after three seasons, sure the Beavs cannot get to the NIT during his time in Corvallis, but someone comes in after Robinson leaves and is able to use the talent of his recruits to find a bit more of the ‘lightning in the bottle’ and take the program to the NIT the next season (or at least get to a winning conference record and then the NIT the season after). We would have seen Robinson as what he should have ended up being - a successful transitional coach at OSU for a VERY down on itself basketball program, and who was here for only three seasons but did what he needed to.

Now of course this did not happen, and we had three more forced years that ended up moving more steps backwards than forwards, and became close (I don’t believe we are totally back where we were before Robinson was hired, even if others seem to think so, just going to agree to disagree with those arguments) to moving the program way back into the hole we saw before he came to Corvallis.

It is funny that I remember after his first season the feeling out there seemed to be he was too good for us/OSU/Corvallis and he was going to move on to bigger and better things!  I very much had my doubts of that for he still had to really prove himself as a true D1 level coach, at least at the "power conference" level, and in the end he did not.

Again though, I don’t think we should totally take away from what he did accomplish in the First Part of his era, that was a VERY VERY VERY tough situation to come into, and he did energize the program a good amount in the initial stages of his career at OSU.

Am I crying over a beer for his current situation? Well if the buy-out numbers are correct, he is going to make more than I ever will during my life so heck no, he had a good gig and in the end though it became a totally missed opportunity to either improve/build on that energy and success, or make the choice to transition from Robinson to someone else in a much more timely manner that would have left his legacy more positive.

This is all not all on Robinson though, and I do find some of the conspiracy stuff out there as well as the "throw him totally to wolves" as both way more unrealistic than De Carolis’s own ideals of trying to get another year out of Robinson, and incredibly short-sighted in terms of being able to remember back to the not so far away past.