Share All sharing options for: Oregon St. Goes For Sweep Against Oregon

Having secured the series win with last night's soggy 4-2 come back victory, when Dylan Davis, the conference RBI leader, delivered a 2 RBI double, and then Caleb Hamilton backed up his first collegiate career home run Friday night with 2 more RBIs to provide the eventual winning margin, Oregon St. goes for the Civil War series sweep this afternoon against Oregon. It would complete a third consecutive sweep of the Ducks by the Beavers of a Pac-12 series played at Goss Stadium. 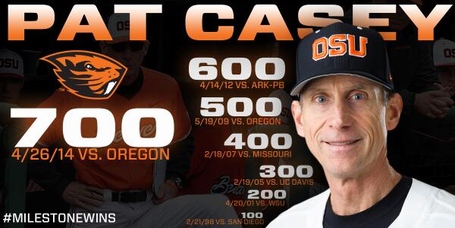 Enduring an almost endless downpour last night that would have resulted in a game postponement in any reasonable scenario rewarded Oregon St. and their drenched fan base with not only Coach Pat Casey's 700th win as the Beaver skipper, it pulled Oregon St. into a tie atop the Pac-12 Conference (and even a percentage point edge, thanks to the as yet only partially played out schedule imbalance) with Washington, after last night's Apple Cup game against Washington St. was rained out. The Huskies and Cougars will try for a double header this afternoon, which could see Washington retake the lead in the conference race even if the Beavers win again today.

Oregon had won 9 in a row before this weekend's trips to Corvallis, including, ironically, coach George Horton's 700th Division I win 2 games before the series started, against Washington St.

Fry worked only 4 innings in his last outing at Sacramento St. last Monday evening, allowing 9 hits and 3 runs in what was eventually a 7-6 loss to the Hornets, one of only 2 games in their last 12 that Oregon St. hasn't won.

Fry was brilliant the week before, in his last Sunday conference start, going 8 innings in an 8-1 win over Washington St.

With freshman LHP Matt Krook, who has a 1.79 ERA, and led the Pac-12 in strikeouts before suffering an elbow injury earlier this month against Washington, which forced him to undergo Tommy John surgery on his pitching arm this past Tuesday, lost for the season, the Ducks are at an apparent pitching disadvantage today, something that wasn't the case in the first 2 contests, and coach Horton was still undecided as to who to send out first this morning.

Horton eventually decided on RHP freshman Trent Paddon (1-2, 3.03 ERA). It will be Paddon's 3rd collegiate career start, in addition to 11 appearances in relief. Paddon has 27 strikeouts against only 5 walks, and has allowed 24 hits in 32 2/3 innings worked.

Coach Casey has made a shakeup in the Oregon St. lineup in his continuing quest to cover for the injured Kavin Keyes, and will start Billy King at first base, and in the 6 spot in the batting order, today.