Jeff Hendrix led off the first and fifth innings with singles, and went on to score both times, the first after a passed ball and a wild pitch put him in position to score on Dylan Davis' sacrifice fly, and the second when Michael Conforto drove his second double of the game off the wall.

That and Caleb Hamilton's first collegiate home run over the left field wall in the 6th inning were more than enough offensive support for Ben Wetzler to become the winningest pitcher in Beaver history.

It wasn't quite complete domination, as Wetzler only had 2 1-2-3 innings, and hit 3 Ducks with pitches, as well as walking 4 more, but only allowed 3 hits over the first 8 innings, and pitched out of every jam until the 9th inning, when Oregon put themselves in position to still have a chance to win.

Kyle Garlick got his second hit of the night, and Nick Catalano followed up with a double to left, putting both in scoring position.

Wetzler responded by striking out Shaun Chase, Oregon's home run leader, but after serving up a ball to Austin Grebeck, Wetzler was pulled after 126 pitches in favor of Zack Reser.

Reser went on to walk Grebeck to load the bases, which prompted pitching coach Nate Yeski to pull Reser in favor of Scott Schultz.

J.B. Bryant broke up the shutout with a ground out that scored Garlick, but Schultz closed the game out with a fly ball out to pick up the save, his 3rd of the year.

"I've never had a time playing Oregon where we haven't had to scratch and claw," Oregon St. head coach Pat Casey said.

Hendrix went 3 of 5 for the night, and Conforto has now reached base in 10 of 14 trips to the plate this week, providing most of the Oregon St. punch. 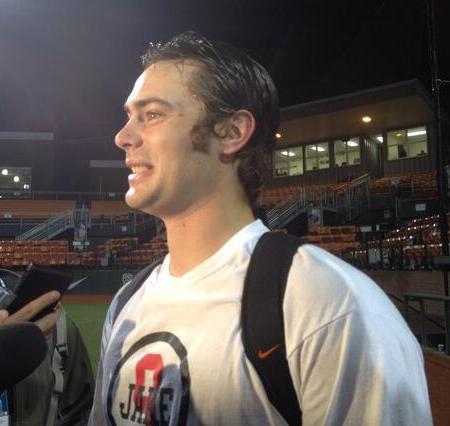 Wetzler, above meeting the media after the game, improved to 7-1 for the season, while Tommy Thorpe took the loss, dropping to 6-4.

Oregon St. improved to 29-8, and 12-4 in the Pac-12, and coupled with Washington St.'s 6-4 win over Pac-12 leading Washington in Seattle tonight, moved within 1/2 game of first place in the conference.

It's bound to be another pitching duel, as Oregon St.'s Andrew Moore (3-3, 2.96 ERA) squares off against Oregon's Jeff Gold (9-0, 2.54 ERA). Gold is one of only four regular starters in the country that is still unbeaten this season.