Oregon St. has completed their second week of Monday-Wednesday-Friday spring practices, which will continue through the end of the month, and will be followed by the Spring Showcase practice at 1 PM on Sat., May 3.

Exclusive of injuries & etc., the position groups continue to solidify, but that injury thing is a thing.

CB Dashon Hunt was working with the "1s" in the secondary today, with Larry Scott in his shoulder pads only, and not working in contact drills.

LB Michael Doctor continues to be out of action with an ankle as well; whether this persists into next week or not will determine if this is really going to be an issue.

Good news was WR Malik Gilmore, who had to have his shoulder wrapped and iced Wednesday, is OK, and was back in action.

Senior safety Tyrequek Zimmerman's class schedule continues to keep him away, and while academics are important and it means more meaningful reps for more players who get to work with the 1s, its a bit of a concern. Not because Zim needs conditioning, but there are plenty of memories of blown coverages the last couple of seasons that seemed to be communications and read issues more than necessarily coverage or technique problems (they were that too, but often because there was a snafu that left someone out of position, or no one in position, to make a sound play in good coverage).

It would be good to see Zimmerman and free safety Ryan Murphy working (and communicating) with each other more.

Towards the end of practice, JC transfer OT Bobby Keenan, who has been the apparent starter at left tackle, got rolled up on, and had to leave practice to have his right ankle taped and iced.

Again, if a weekend's rest has Keenan back on the field, no big deal. Otherwise, it could become a setback on working on establishing timing and communications among the offensive linemen.

These kinds of issues are the very thing that prevents the Spring Game from really resembling a game, and also prevents what would probably benefit this team as much as anything; an actual real scrimmage.

When a team has a lot of new people, maybe there's still plenty of details to work on, and plenty of position battles to sort out. But while still a "young" team, this Oregon St. team is really pretty experienced, as far as a lot of players that have been around for a while now.

It wouldn't happen against Portland St. this year, since the Vikings and Beavers will be playing come Aug. 30, and you will never see conference opponents agree to scrimmaging each other. But with most position groups pretty sorted out (other than the fact that Dylan Wynn appears to be on the first string, second string, and third string defensive line; not that having Wynn seek and destroy in all situations is a bad thing), a scrimmage against Sacramento St. or Cal-Davis could provide an opportunity to reinforce or expose a lot. Right now, the Beavers appear ready for the summer 7 on 7 league. But that's high school stuff, and not what this team will be judged on. 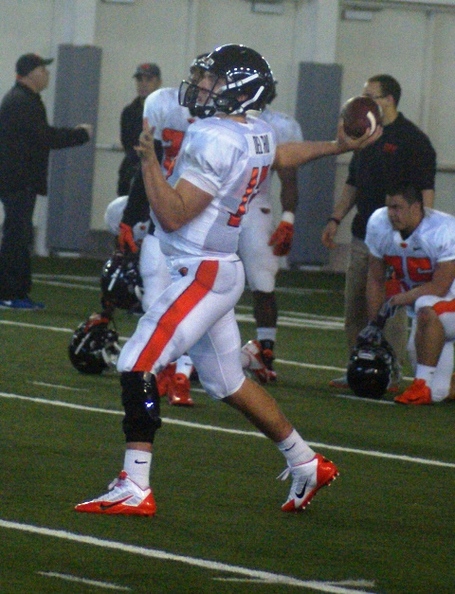 Oregon St., and sophomore transfer QB Luke Del Rio, above (photo by Andy Wooldridge), did get a piece of much anticipated news today, as Del Rio has been ruled eligible to play this fall, and will not need to set out a season.

That puts him into immediate competition with last year's 3rd string quarterback Brent VanderVeen and redshirt freshman Kyle Kempt, who right now appears to be the #2 on the squad, to backup Sean Mannion.

If Mannion stays healthy, it could waste a season of eligibility for Del Rio, who red-shirted last year at Alabama. But based on progress over the last 2 weeks, Del Rio could very well emerge as the #2, and if Mannion should go down, having another Cody Vaz ready in the wings could be the single biggest factor separating Oregon St. from a quality bowl game and being home for the holidays.